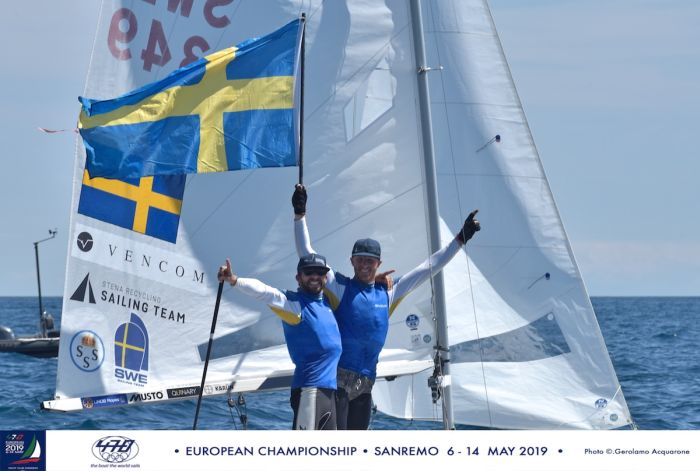 Anton Dahlberg/Fredrik Bergstrom celebrate their win in the 470 Europeans.

Two medal races, sailed in perfect Mediterranean conditions, wrapped up the 470 Europeans, organised by local Yacht Club Sanremo and Marina degli Aregai, in co-operation with the national and international 470 class.

At the eve of the grand finale, both the men’s and the women’s top ten standings were so close to give everyone a chance to grab a medal, adding expectation to the mix.

Despite some hours’ waiting, shortly before 2 p.m. the wind set and enabled the Race Committee two launch the medal races on windward/leeward course, that were concluded in less than half an hour.

Ladies kicked-off first, in a nice westerly, with an intense start. France’s Camille Lecointre and Aloise Retornaz took the lead, carefully covering their closest rivals Afrodite Zegers/Lobke Berkhout from the Netherlands and Poland’s Agnieszka Skrzypulec and Jolanta Ogar, with British Hannah Mills and Eilidh McIntyre trying to get free from the mid of the pack. Behind the French team – bronze medalists in Rio 2016- who rounded all the marks in first, the fight for the double-points medal race flared up, with the Dutch and the Polish swapping places.

Closing in second and in third was not enough for the Skrzypulec/Ogar duo and Germany’s Nadine Boehm/Ann-Christin Goliass to reach the podium, while a fourth and fifth respectively for Mills/McIntyre and Zegers/Berkhout guaranteed silver and bronze to the much decorated female duos.

“The medal race was a tough, especially the start, but very exciting.” said helm Camille Lecointre. “We needed to sail well, think about our race. We only needed to keet an eye on the competition on the second lap. We’re very happy.”

Shortly after the women’s celebrations on the water, the Race Committee launched the starting procedure for the men, where the scoreboard was even closer, with all the ten crews having a chance to jump on the podium. Australians Mathew Belcher and Will Ryan entered the medal race with a five-points lead on the reigning champions Anton Dahlberg and Fredrik Bergstrom from Sweden, with Spain’s Jordi Xammar/Nicolas Rodriguez and Greeks Panagiotis Mantis and Pavlos Kagialis, all at short distance from the top and all serious contenders to the medals.

The wind having picked up a bit, the start was very tense and heated with the Swedes pushing hard from the pin end of the line, and the Austrians David Bargher/Lukas Maehr getting a penalty. On the first windward mark a collision between the Austrians and the Greeks resulted in a penalty for Mantis/Kagialis too, forcing the bronze medalists in Rio 2016 out of contention for the top spots, with New Zealanders Paul Snow-Hansen/Daniel Willcox showing excellent speed and guarding their second place to the finish line.

The Australians and the Kiwis closed the match in first and second place respectively, with French pair Kevin Peponnet/Jérémie Mion in third, realising the best comeback of the group. A fifth place guaranteed Dahlberg/Bergstrom their second consecutive European title with Xammar/Rodriguez getting a seventh and securing silver, while bronze went to the French duo.

“It’s amazing!” said the Swedish sailors, just after crossing the finish line. “It was a very tough race, everything was there to grab. We had to keep focused all the time. It’s been a very challenging week and we are super happy!”