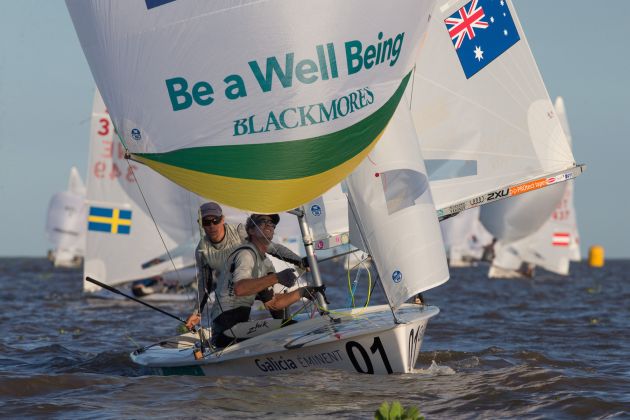 A lot of patience from Race Committee and teams was required on day three of the 2016 Men’s and Women’s 470 World Championships in Buenos Aires, Argentina with light conditions once again postponing racing until the afternoon at Club Nautico San Isidro. The 470 Men got underway first just before 1600 hours local time, followed by the 470 Women.

Defending World Champions and World #1 pair of Mat Belcher (QLD) and Will Ryan (QLD) continued their climb up the leader board on Wednesday, 24 February to just sit outside the medal ranks in fourth with three race days to go.

After posting a sixth and third in the two races of the day, Mat Belcher and Will Ryan moved from eleventh into fourth.

“We were again postponed onshore until the land breeze built and steadied. We were pretty happy with how we sailed today, there were some big gains and losses, but we played the game well. The wind was ranging from five to twelve knots and it's nice to be getting our rhythm back and start to work our way back up the leaderboard. Without a drop the pressure is on but after today it's nice that most of the top guys are in a similar position. I like this style of racing. We have an early start tomorrow at so it will be another long day,” Mat Belcher said about the day.

Five races down in the 470 Men, puts the fleet at the halfway stage of the Championship opening series of 10 races.

The South African and Spanish crews share the lead on 21 points, Sweden is third on 27, followed by the Australians and Croatians on 31. For full results click here.

The original schedule of three races was ruined by the earlier postponement ashore, followed by a change of weather and increase in current at the end of the day, with two races completed for the 470 Men and one for the 470 Women.

In the Women’s fleet, only four races have been completed thus far with Australian Sailing Team’s Carrie Smith (WA) and Jaime Ryan (QLD) sitting in 18th and Sasha Ryan (QLD) and Ella Clark (WA) in 27th.

Australian Sailing Squads Patrick and Alexander Conway (NSW) posted a 32nd and eighth to move up into 17th. Victorians Tom Klemens and Tim Hannah had a 23rd and 36th and are ranked 36th overall in the Men’s 470 fleet.

The leading three nations are France, Austria and the Netherlands. For full results click here.

In other World title events it was a rest day at 2016 RS:X Men’s and Women’s World Championships in Eilat Israel.

After light conditions over the first two days of the event only four races were completed out of the six races planned. For Australian Sailing Squad’s Joanna Sterling (QLD) this meant a 32nd place overall and missing out of Gold fleet after posting a 5, 29, 15, 13 series. With no opportunity to climb back up, Sterling will continue racing in Silver fleet.

“The conditions in Eilat are predominantly a very shifty and light offshore land breeze, which has made it difficult to get out and racing. For the first two days of the event we have been competing in about four to eight knots with big, unpredictable shifts across the course and it has been very easy to get caught out! My focus has been to stay calm, be patient and position myself well tactically. In most cases this has gone well for me and I've posted decent results in three of the four qualifying races. Unfortunately I scored a big result in the second race of the event and, with only four races making up the qualifying series, will have to carry this result and miss out on gold fleet,” Jo Sterling described the two race days.

“This outcome is really disappointing after seeing so much improvement in my sailing. My speed in light and marginal conditions, which has previously been a liability, is now one of my strengths and the hard work I've put in over summer has paid off by increasing my fitness and power. Looking ahead to the rest of the event, I am still determined to gain the best result possible and learn from my racing. Despite setbacks I can see that this event is a valuable experience and I'm looking forward to some more tricky races.”