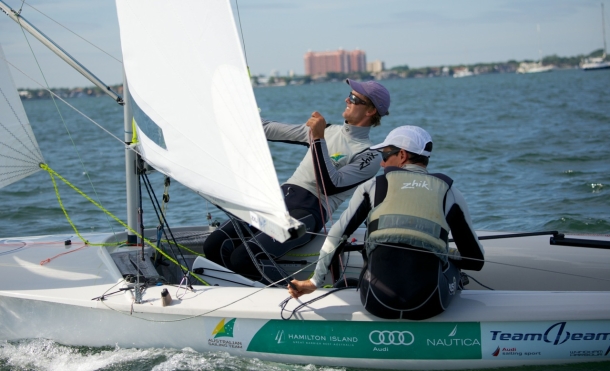 World Champions Mathew Belcher (QLD) and Will Ryan (QLD) have successfully started their 2015 regatta season by winning the North American Championships in Miami on Tuesday (19 January). The event served as a welcome warm-up event ahead of the ISAF Sailing World Cup Miami to start next week (26-31 January 2015).

While the ISAF Sailing World Cup in Melbourne in December kicked-off the 2015 ISAF World Cup series, Miami will be the second World Cup regatta and will be the first world sailing event in the new year.

Men’s 470 Olympic gold medallist Mat Belcher and World Champion crew Will Ryan will be the red-hot favourites going into the regatta after the pair just won the North American Championships as a warm-up. For the World Cup, forty-five teams are registered to compete in the Men’s 470 and quality is prevalent throughout the pack.

Belcher and Ryan missed the Sailing World Cup in Melbourne to compete at the ‘Brasil Copa de Vela’ at the Olympic venue in Rio de Janeiro instead and after winning in Brazil, as well as the North American Championships this week and thus having been unbeaten since April last year, they will be the ones who will be chased.

“Will and I are in a great position and we are just really enjoying our level of sailing at the moment” Mat Belcher said. “We are working hard to continually learn and develop new areas of our sailing together. We have plenty to learn and develop prior to Rio and Miami SWC provides this opportunity.”

“We are looking forward to starting our 2015 season off well. As we get closer towards Rio 2016 these events slowly become more and more important for the teams. Miami, will see almost all the top 15 from last years worlds and the regatta will be a great opportunity for everyone to see where everyone is at.”

Also current Laser World #1 Tom Burton (NSW), Sail Melbourne winner and recent national champion, will have the pack at his back in the high-calibre 126-boat Laser fleet – a position Burton quite enjoys to be in:

In the 49er, Olympic gold medallist Iain Jensen (NSW) will team up with Australian Sailing Squad’s Joel Turner (QLD) while Nathan Outteridge, who just finished the 2015 Moth Worlds in the runner-up position, is taking a break to recover from a medical procedure.

Australian Sailing Team’s David Gilmour (WA) and Rhys Mara (VIC) are the second Australian crew in the fleet. Two crews will also represent Australian Sailing in the 49erFX with both Olivia Price (NSW) and Eliza Solly (VIC) as well as Tess Lloyd (VIC) and Caitlin Elks (WA) contesting the event.

The 2015 ISAF Sailing World Cup Miami marks the second anniversary of competition for the Nacra 17. The mixed multihull, which will be new on the Olympic program in Rio 2016, made its debut at the 2013 edition, but Australia’s top ranked Nacra crews of Olympic silver medallists Darren Bundock (NSW) and Nina Curtis (NSW) as well as World Championship bronze medallists Jason Waterhouse (NSW) and Lisa Darmanin (NSW) have opted to train at home and prepare for the European season to start with the Trofeo Princesa Sofia regatta, to be held between 28 March and 4 April in the Bay of Palma in Mallorca (Spain).

In the Paralympic classes current SKUD18 World Champions and London Paralympic gold medallists Daniel Fitzgibbon (NSW) and Liesl Tesch (NSW) are looking forward to kick-starting their 2015 sailing campaign at one of their favourite venues:

“Miami is one of my favourite sailing venues overseas” Daniel Fitzgibbon said. “It’s always nice weather there and warm with beautiful waters and manatees in the water. It’s a great venue to sail and we are really looking forward to the regatta. We have a strong fleet to compete against which is exciting. We’ve finished off 2014 successfully by winning in Melbourne and the plan is to kick-off 2015 successfully as well.”

In the 2.4mR Tasmanian Matt Bugg will aim for a top spot after winning in Melbourne and finishing fourth at the North American Championships this week.

Competitors in the Paralympic events will have five days of fleet racing from Monday 26 January to Friday 30 January.

Medal Races across the ten OIympic events will bring the regatta to a close on Saturday 31 January where medals will be awarded to the top three boats.