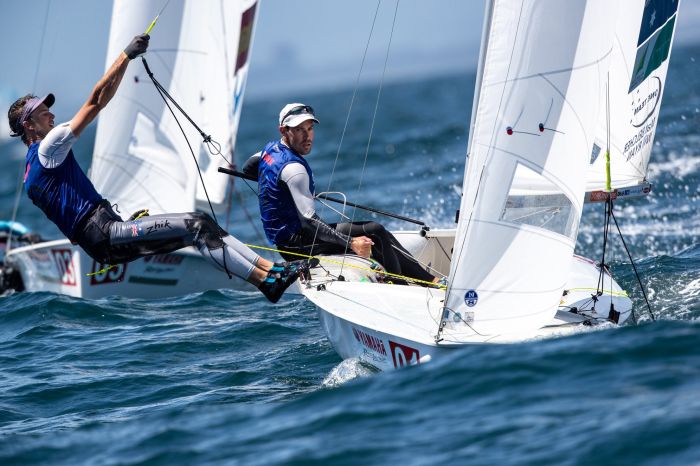 Three races on race day 4 and the leader board hosts new series leaders with Mathew Belcher/Will Ryan (AUS) taking over the lead in the 470 men and Hannah Mills/Eilidh McIntyre (GBR) in the women.

Stunning track conditions delivered perfect 470 racing at the 2019 470 World Championships and Olympic Qualification in Enoshima, Tokyo. Breeze, surfing condition waves and the oscar flag up allowing unlimited pumping, so plenty of exhausted sailors back ashore after 3 hours of demanding racing.

All still to play for with three more races for all fleets tomorrow, Thursday 8 August, to determine the top ten medal race line-up for Friday and the all critical nation qualification for Tokyo 2020.

A solid top three has established itself in the men’s fleet with Mathew Belcher/Will Ryan (AUS), Jordi Xammar/Nicolas Rodriguez (ESP) and Anton Dahlberg Dahlberg/Fredrik Bergström (SWE) sitting ahead of the chasing pack. Unlocking their stranglehold on the leader board will require some race track nous from the chasing pack to out sail these three impressive teams.

There is a ten point margin between the Swedes and the fourth placed defending World Champions Kevin Peponnet/Jeremie Mion of France, and in a fleet of this quality that is a massive margin.

The twenty-six men’s gold fleet got race 6 underway in around 11 knots of breeze, and it looked as though world #1 ranked pair of Mathew Belcher/Will Ryan (AUS) had the track under control, holding off Spain’s Jordi Xammar/Nicolas Rodriguez and Great Britain’s Luke Patience/Chris Grube. Heading down to the last downwind gate the Spanish nudged through to take the advantage, went through the gate and accelerated to the finish, to make it four wins in a row. Second to the Aussies and third to the British.

“We were leading into today and we had a really good day, really good conditions,” commented Xammar. “Enoshima delivered and we had two race wins and a 7th which is really good for us and we are really happy.”

Rodriguez added, “We had a really tight battle between the Swedish and the Australians. We managed to have a good day and with the big waves, big breeze and windy conditions we really enjoyed the day, and let’s see tomorrow if it is going to be almost the same. It will be really good fun for us.”

Xammar continued, saying, “We are really happy with our results. For us it is a privilege to be fighting with Mathew and the Swedish. They were our idols, especially Mathew, many years ago and now to go into the last day of finals one point behind him is a privilege. We will try to enjoy the day a lot and of course try to catch him.”

The physicality of the race cannot be understated, particularly for the crew, as Rodriguez explained, “after three races it is really exhausting. It is really hot, we are racing in over 30 degrees with this humidity. It is really hard to be out there and on the down winds we are pushing really hard and our heart rate is going really high.”

In a building breeze, the second race of the day (race 7 of the series) kicked off with Greece’s Panagiotis Mantis/Pavlos Kagialis leading from start to finish, and their form continued with a 4th in the final race of the day. Up to now, the pair had delivered a mix of top ten and mid-fleet scores, but turned on a game changing day to move up to 5th overall and rank as the top placed nation in the chase for one of the four Tokyo 2020 nation qualification places.

“It is really important to have a good first day in gold fleet because every point counts,” said Mantis. “Today was a good day for us and I hope we continue you like this tomorrow. We enjoyed a bit more breeze and we started the Championship really bad,” he added in reference to their 18,13 scorecard in the first two races. “We had to focus and put ourselves in a position to be more up front from the start of gold fleet.”

“Now we are in a very good position one day before the medal race so we are in a good way for the qualification,” concluded Kagialis.

Like the Greeks, Russia’s Pavel Sozykin/Denis Gribanov are also on the hunt for nation selection to Tokyo 2020. Their third placed in race 7 pushed them up the Olympic nation qualification standings, and by the end of the day were in 11th overall and safe inside the top four slots.

The wind and waves increased ahead of the final race 8 of the day, with around 15-16 knots and building 2-3 metre waves. Xammar/Rodriguez were fixed on their Australian targets who were fast off the start, and the Spaniards worked their way through the pack from 5th at the first mark to lead by the downwind gate, with Belcher/Ryan trailing in 4th place. Sweden’s Anton Dahlberg Dahlberg/Fredrik Bergström did not make life easy for the Spanish boys, overhauling them as they rounded the windward mark for the second time and blasting down the reach, with the Australians gaining and moving up into 3rd. But, the Spanish once again pressed their speed button to round the reaching mark ahead and dial into the final two legs to the finish, making it another win for Xammar/Rodriguez.

A third place finish for Belcher/Ryan was enough to end the day in the overall lead, with the Spanish in second overall just 1 point behind the Aussies and third overall to Dahlberg/Bergström.

Further back from the frontrunners, the teams representing nations still to qualify for one of the four places for Tokyo 2020 on offer at the Worlds were jostling for track position. So far so good for the teams from Greece, Russia, Turkey and Hungary (in order of position in overall results) who maintain their hold on the four national qualification positions after race 8. Three races tomorrow though and the tables could be turned on the leading four, as close behind are teams representing China, Switzerland, Germany, Argentina and Israel (in order of position in overall results).

Whilst for many gold fleet racing is what it is all about, the results required to achieve that can seem a long way off when up against such a depth of talent. Austria’s David Bargehr/Lukas Mähr (AUT), who only two years ago secured bronze at the 2017 470 Worlds, now find themselves in the unusual position of leading the silver fleet. Not making gold fleet is certainly an extraordinary outcome for the pair and with it they have missed out on one of the four Olympic qualification places here.

After the 2019 470 Worlds, the focus moves to Continental Qualification, which guarantees an Olympic quota place to each of the six continents. The team’s final chance to claim a spot for Austria will be at Hempel Sailing World Cup Genoa, Italy, 13-19 April 2020. There they will have to outmanoeuvre other European nations for the one European Continental place on offer. Similarly for other teams, after the 470 Worlds, the next and final opportunity to qualify for Tokyo 2020 will be at their respective Continental Qualification events.

Although there are still three races tomorrow to decide the medal race teams, the British and Japanese are locked into their own duel with just 5 points separating them. The gap to third place is a significant 22 points, so based on current form it looks as though this is shaping up to be a two-way battle for gold, with the rest making the charge for bronze.

Kondo Yoshida/Yoshioka carry the weighty pressure of national selection on their shoulders, as end the Worlds wearing medals and they will guarantee their place on the Olympic starting line next year. Step off the podium and Japan’s national selection process continues.

In the day’s opening race for the thirty-nine boat women’s fleet, the world ranked #4 pair of Mengxi Wei/Haiyan Gao from China led to the first mark, before Mills/McIntyre took over in the downwind leg and held their dominance to the finish. The Brits’ win was the start of their best day so far, as they went on to score 2,1 in the next two races.

China’s second place initially closed the gap to third place, but follow up scores of 20, 12 offset their gain and they ended the day where they started it, in sixth overall.

The pair are good for Tokyo 2020, as Gao explained, “Last year we qualified China to the Olympic Games and we are already confirmed as the team who will be competing here next year.”

History was made for China back at the 2013 470 Worlds when they walked away with their first ever medal, a bronze, and this pair aim to match or exceed that success.

A slight increase in breeze to 13 knots for the next race, the 7th of the series, saw Kondo Yoshida/Yoshioka swift off the line and leading around the first mark, along the reach and to the first downwind gate. Brazil’s Fernanda Oliveira/Ana Barbachan pushed hard, working their way up through the fleet to round just behind the Japanese. The Japanese held their lead, with Mills/McIntyre working their way through from fifth at the first mark to take out second by the finish and third to Brazil.

Oliveira/Barbachan hope to secure Brazil’s ticket to the Olympics, which would make it a sixth Olympic appearance for Oliveira. Enjoying a 470 career spanning over twenty years, Oliveira has represented her nation at the 2000, 2004, 2008, 2012 and 2016 Olympics and counts one bronze medal from 2008. Barbachan is a two-time Olympian from 2012 and 2016. Their results today geared them up from 14th at the beginning of the day to 12th by the end and well inside the six nations looking to secure Tokyo 2020 Olympic qualification.

“I feel the same now as I did the first time. I am here because I really enjoy it,” said Oliveira. “I have a very special partner in Barbachan and if everything goes OK we will do our third Olympics together.”

Race 8 saw Camille Lecointre/Aloïse Retornaz (FRA) set the pace up the first leg, but all change as Mills/McIntyre and Kondo Yoshida/Yoshioka were soon in their own race at the front. The final win of the day went to the British, 2nd to Japan and 3rd to the French.

In the hunt for Olympic qualification, teams were pushing hard, and based on today’s provisional results the nations inside the top six nation places (in order of position in overall provisional results) are Poland, Australia, Netherlands, Brazil, Israel and Germany. Three more races tomorrow and just a handful of points separating the teams gunning for nation qualification guarantees another adrenalin fuelled day as teams from Switzerland, New Zealand, Sweden, USA, Russia, Malaysia, Argentina, Thailand and Hong Kong places (in order of position in overall results) hope to make their break into the leading six nations. There is still plenty to play for.