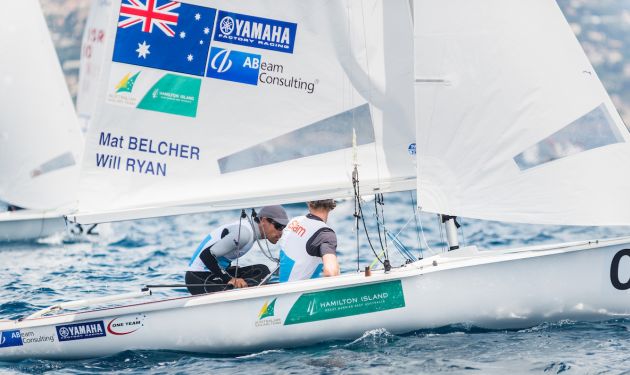 All change on race day 4 at the 470 Europeans in Monaco as big breeze and waves hit the race track and upped the pace, in complete contrast to conditions over the first three days.

The more experienced teams came to the fore, with the biggest gains on the race track going to the world #1 pair of Afrodite Zegers/Anneloes Van Veen (NED) who clambered from leaderboard 16th up to 1st.  Sweden’s world #1 pairing of Carl-Fredrik Fock/Marcus Dackhammar continue to dominate in the men, but the points margins are drawing in.

Big breeze and sea has meant some shredding of equipment, with damage to boats and a few bent masts, as the gusts powered through.

Racing was postponed this morning as the waves of up to 4 metres and average wind speed of 25 knots, with gusts up to 32 knots, were a volatile combination. So, the Race Committee waited a couple of hours until the wind had dropped to 22-23, with gusts of 25 knots, to get racing underway. The wind continued to decrease to around 20 knots for the second race of the day.

470 WOMEN
After opening their series on the backburner, the world #1 partnership of Afrodite Zegers/Anneloes Van Veen racked up a 2nd place in the first race of the day, moving up to 5th overall just 6 points off the Polish leaders. The pair led for most of the race, before the Spanish overtook them on the final downwind leg. A similar pace in the next race rewarded the Dutch with the race win.

The women’s scoreboard has compressed significantly, with just 9 points difference between the teams placed in 1st to seventh.

470 MEN
On a day when experience came to the fore, it was no surprise to see Olympians taking control of the track. Relishing the breeze, Olympic bronze medallists Panagiotis Mantis/Pavlos Kagialis (GRE) staked out the first win of the day, repeating in the second and consolidate their position on the leader board.

The consistency of the world #1 pairing of Carl-Fredrik Fock/Marcus Dackhammar continues, as they racked up a 9,14 today, holding them firm at the top. But the points gap is closing in. France’s Guillaume Pirouelle/Jeremie Mion move up to second from their 3,2 scorecard, and Turkey’s Deniz Cinar/Ates Cinar claim third overall.

Third overall demonstrates a signficant escalation of performance for the Cinar brothers who have been training hard and admit they have never before placed ahead of Australia’s Mat Belcher/Will Ryan, who have dropped to 4th overall.

All change again on Friday with the forecast indicating a drop in breeze down to 8-10 knots. Three races are scheduled for all fleets to determine the top 10 teams who will advance to Saturday's medal race. 470 Women race first at 1200 hours, followed by Men Gold and Men Silver.