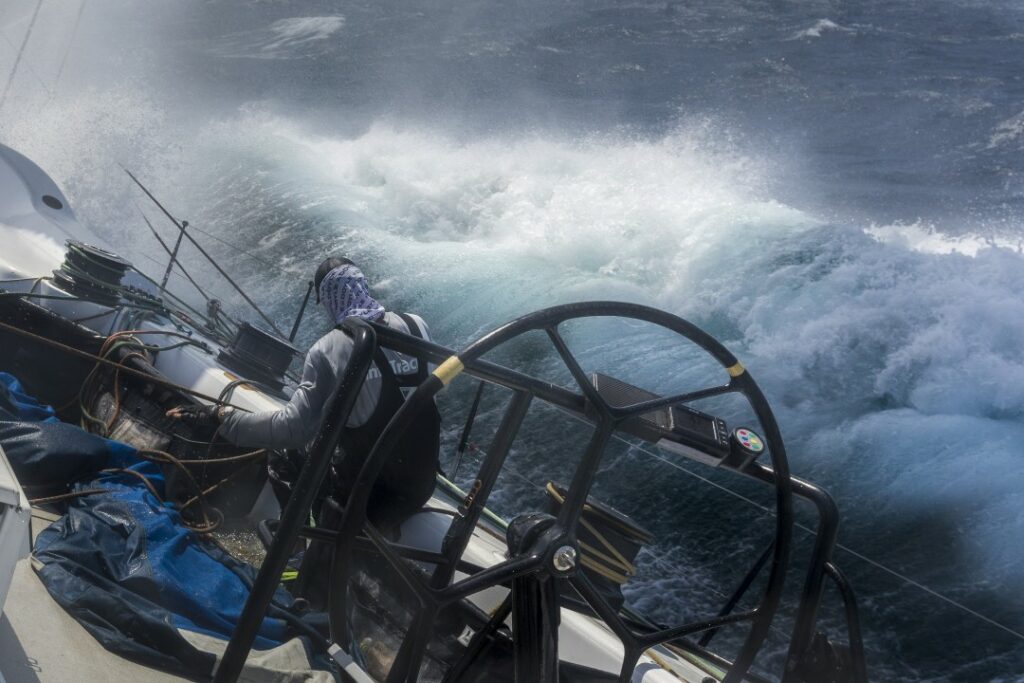 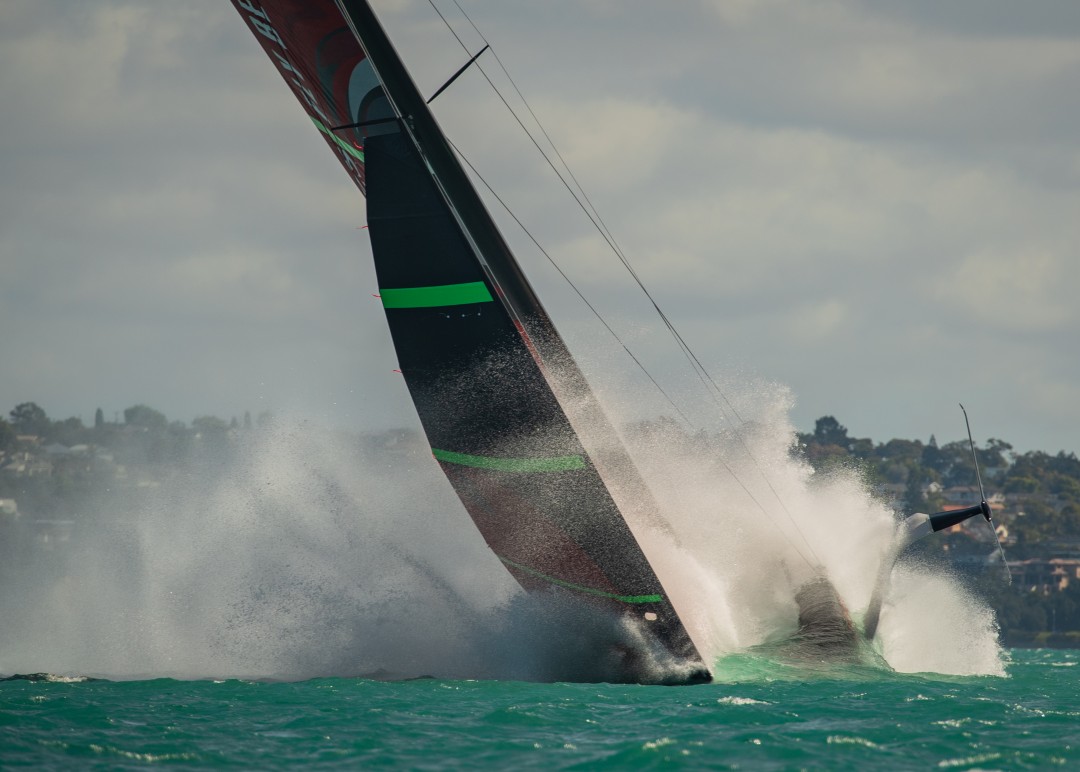 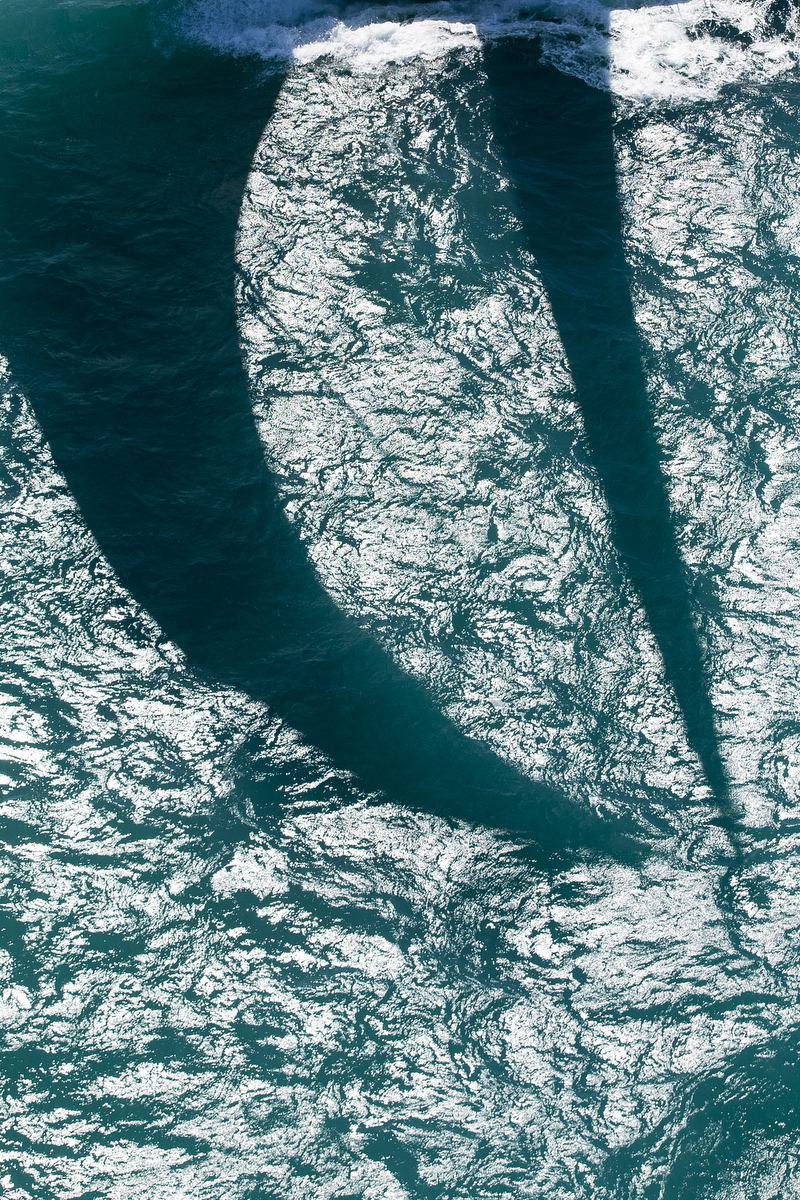 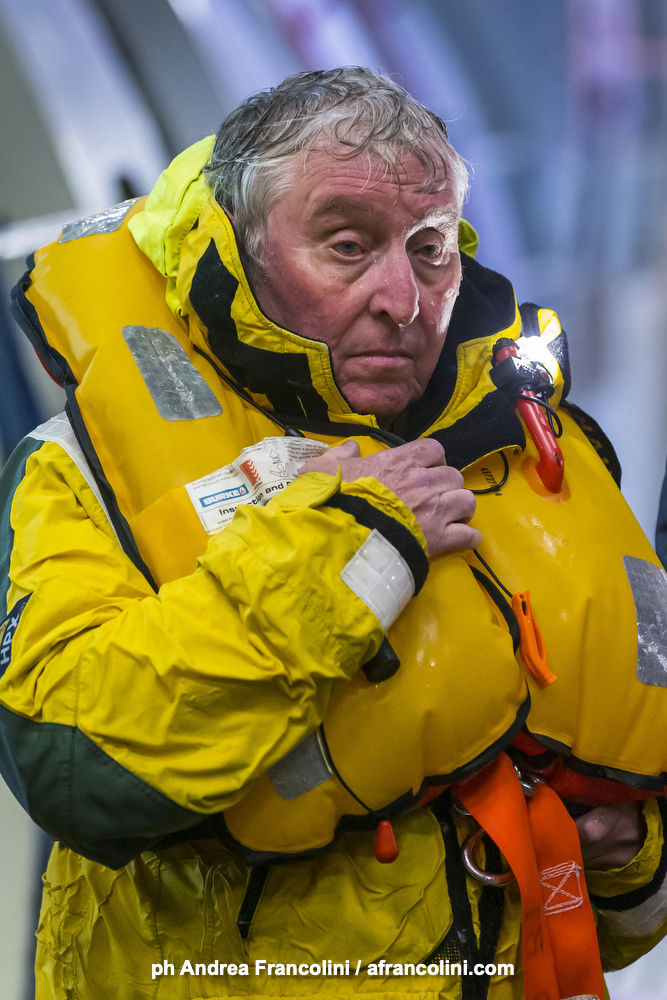 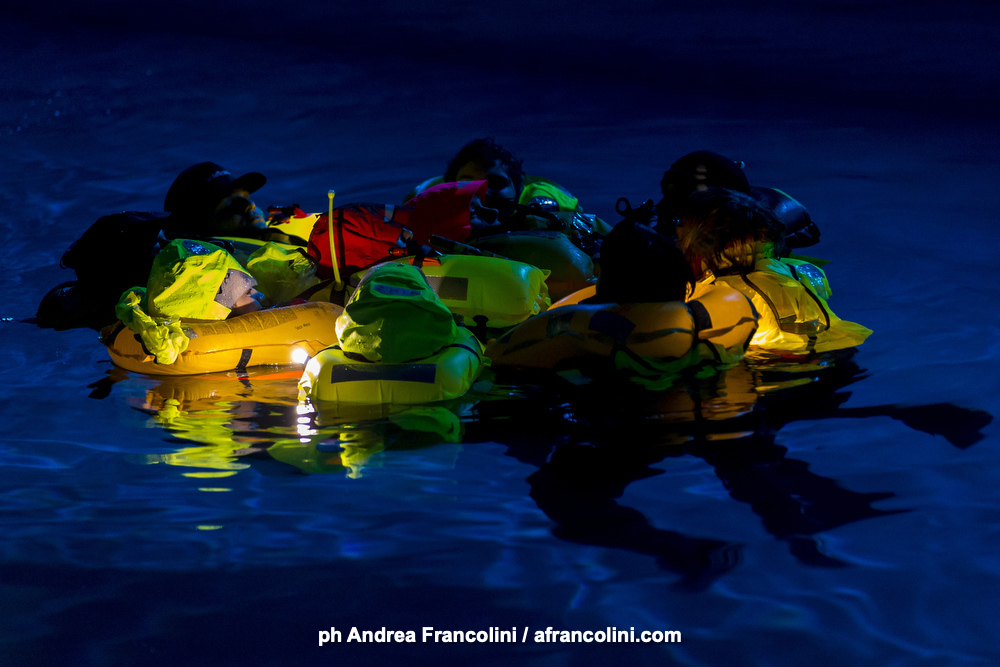 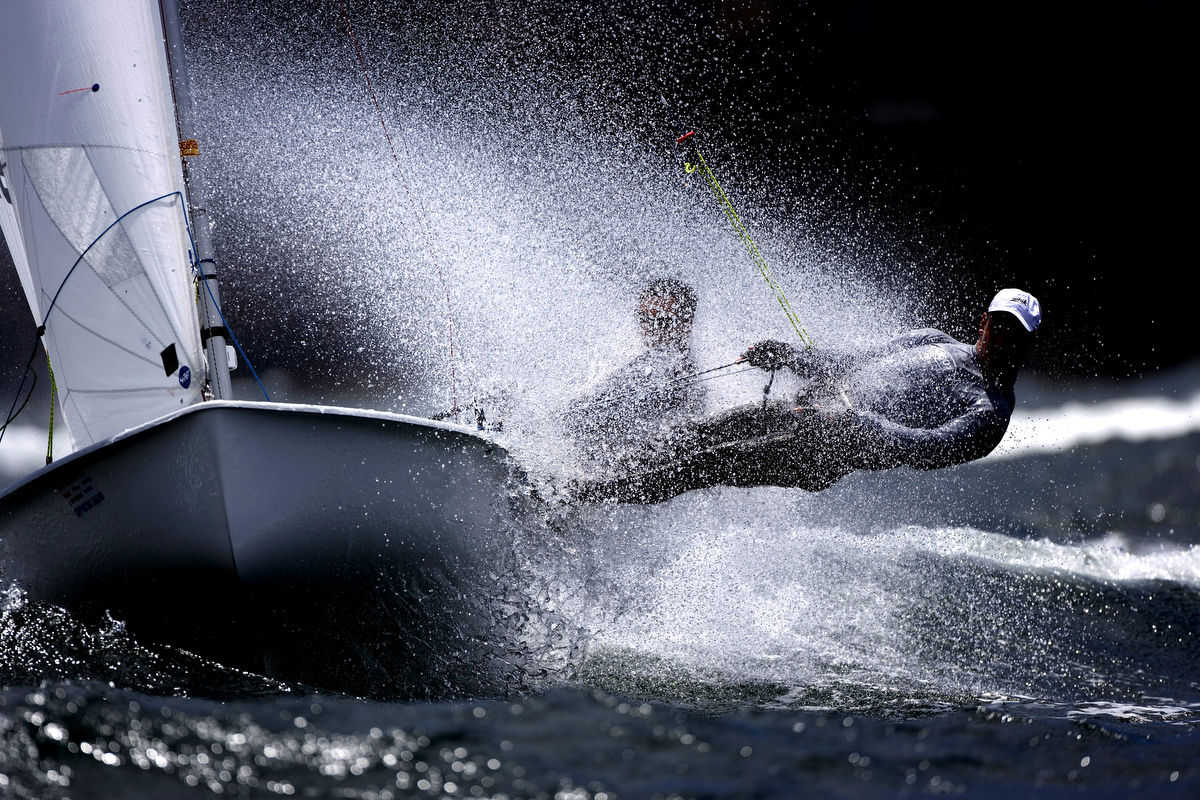 A 470 competing in the Sydney International Regatta 2007. Pic - Andrea Francolini 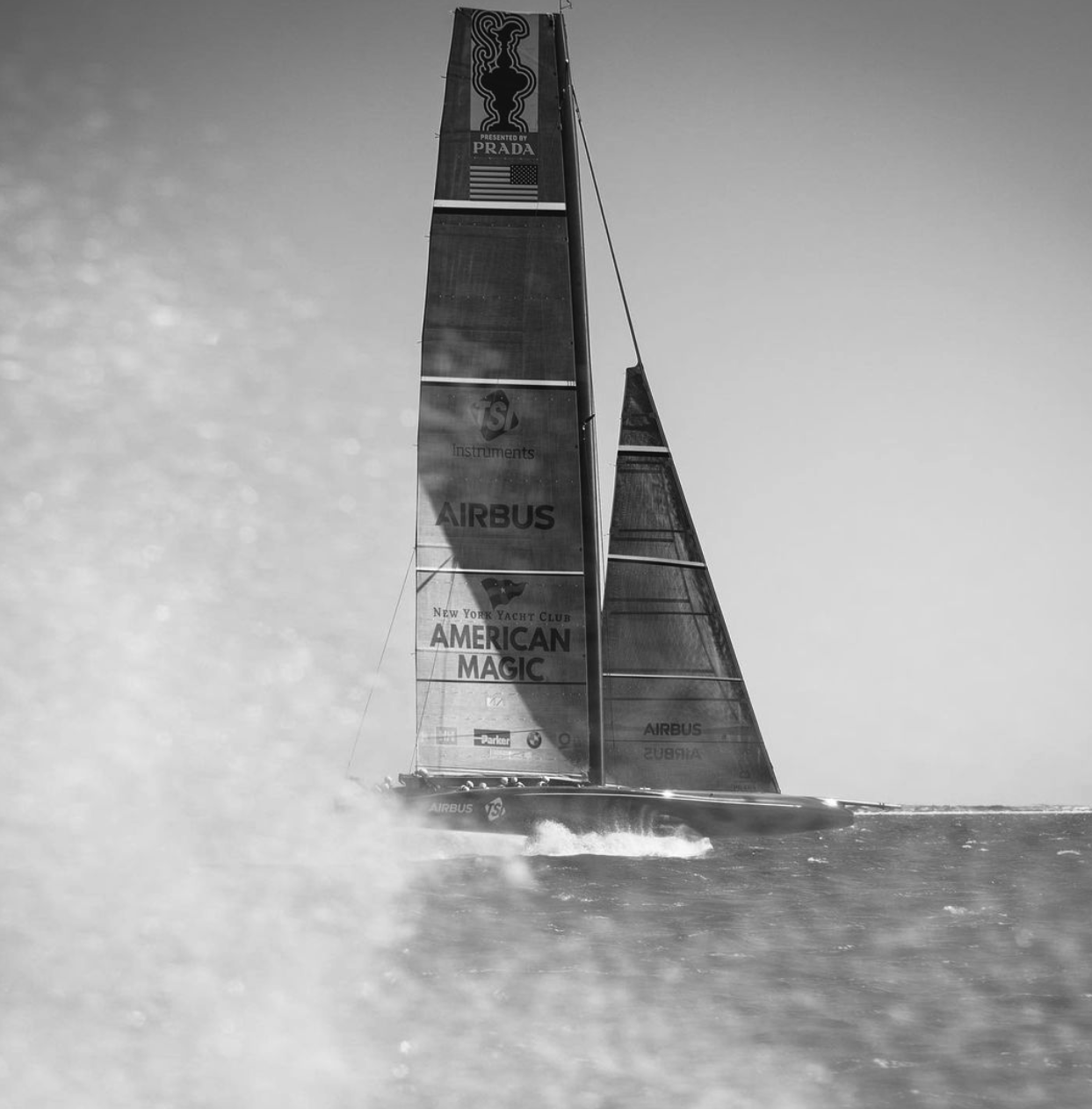 MySailing regularly features stunning sailing photos, the images captured by professionals who are passionate about their craft.

I often marvel at what might appear to be a simple shot ­- but how on earth did the photographer shoot the boat at that angle or achieve a magical oceanic shimmer that lifts the image to another level?

Recently, I caught up with Sydney-based photographers Andrea Francolini and Dylan Clarke to find out why they do what they do and the stories behind their photos nominated for the Mirabaud Yacht Racing Image award 2021.

After Francolini slipped on the dock at Lake Como while stepping onto a 470 sailing dinghy, his cousin decided he would be a more of a hindrance than a help and sailed off without him.

“He left me with his bag and in his bag was a camera,” said Francolini, who celebrated his 50th birthday in June. “I started shooting some pictures for fun and I had absolutely no idea what I was doing. And then a mother of a sailor came up asked, ‘Do you take pictures for the event?’ And the rest, as they say, is history.”

Francolini went on to photograph boats all over the world and has been based in Sydney for 21 years. You might have seen his name credited for events including the Sydney Hobart Yacht Race, Magnetic Island Race Week and Hamilton Island Race week, to name a few.

“When you have 20 knots of wind and two metres swell, everybody is good at taking a picture because it’s in front of you,” he said.

“It’s when there’s no elements, there’s no wind, it’s overcast, it’s just dull. That’s where you see the difference and where you push because you don’t want to come home with the same picture taken last week.”

Despite being a sought-after sailing photographer, Francolini does not sail. “It’s something a lot of people struggle to understand. But I know enough that when I’m on board I can be next to somebody who’s hoisting a spinnaker and I’m not going to get an elbow in my face.”

He may not be a sailor but Francolini relishes being out on the water.

“What I love about sailing is – yes, sometimes you have to deal with mother nature and her hissy fits – but you’re never going to get the same conditions.”

Francolini snapped the super maxi InfoTrack, recently renamed LawConnect, during a 40-knot southerly buster. This incredible photo made it into the top 80 for the Mirabaud Image Award 2021 – an annual international yacht racing photography competition.

Francolini was on board the super maxi to take photos of the crew during a training session in the lead-up to the 2020 Sydney Hobart, cancelled days later after a Covid-19 outbreak.

Instead of waiting for the forecast southerly to come to them, the crew sailed the 30.48m carbon boat outside Sydney Heads to hunt it down.

“We started sailing south and, all of a sudden, on the horizon we can see it – the water changing, the sky changing. And then this thing just hit. We turned and were reaching down. It was amazing.”

Francolini was in awe of the professionalism of the crew, who worked as one in challenging conditions. “Even though we were going downwind, you know that they’re in control. I have a lot of admiration and respect for these sailors,” he said.

Francolini and a crew member were heading to the cockpit following a failed attempt to photograph the action from the bow after a wave lifted the pair off their feet. He still had his camera in hand when he saw a photo opportunity that was too good to miss. A wave was about to break on the leeward side of the boat (the side closest to the water at the time), right behind a lone crew member who was trimming one of the sails.

Francolini seized the moment and raised his camera.

“I got off the boat and someone at the dock looked at me and said, ‘Damn you’re a mess, but it must have been a hell of day.’ And I said, ‘You’ve no idea.’”

Francolini’s photo perfectly captures the colours and chaos of the 40-knot southerly.

During four months of lockdown, Francolini pivoted to portrait photography and created BREATHE, an abstract photo series of smoke, on exhibit at a gallery in Starnberg, Germany.

Now that restrictions around the pandemic have eased, Francolini is “over the moon” that he will be able to return to sailing photography.

“I’m dying for it. I’m looking forward to getting wet again.”

Dylan Clarke didn’t set out to become a sailing photographer/videographer.

The 36-year-old grew up sailing in Port Lincoln, Adelaide and moved to Sydney at the age of 18 to be an apprentice boat builder with McConaghy Boats.

This catapulted him into the world of technical carbon fibre race yachts, and he went on to travel the world working as a boat builder for “different racing circuits and sailing teams”.

Clarke was working as a boat builder for the 35th America’s Cup in Bermuda in 2017, when everything changed. Six months before the event, he broke both his legs in a kite surfing accident. It changed Clarke’s life and jettisoned him on a completely different trajectory.

During rehabilitation in Bermuda, Clarke tapped into ocean-based photography and videography, which had always interested him. He continued to explore the craft and ended up swapping boat building tools for cameras. This led to a role as performance media for the US America’s Cup (AC) entrant American Magic.

“Just to be able to capture something like the AC boats, where a lot of people don’t have that kind of access to shoot those kind of boats. It’s a unique opportunity to be able to photograph high-performance boats. There is always a different angle. Everything is changing all the time. It’s fast-paced and you’ve got a split second to take that photo,” said Clarke.

A perfect photo opportunity came to Clarke in a training session prior to this year’s AC. While American Magic’s crew were taking a break, Clarke, who was on a chase boat at the time, spotted Emirates Team New Zealand charging along at an incredible speed. It was later revealed that the boat had reached speeds of up to 40 knots (74 kilometres per hour).

Clarke’s sailing background pre-empted him to start taking photos, as he sensed something big was about to unfold.

The photo Clarke submitted to the photography competition, became, as a fellow photographer put it to Clarke – “the photo of the America’s Cup”. It shows Team NZ’s bow digging into the aquamarine water, half submerged, spray everywhere. It encapsulates the high-stakes drama of the event.

Clarke’s photo made it into the top 20 with the winners announced in December.

Clarke was also around for another dramatic America’s Cup event, the capsize and sinking of American Magic in January during the Prada Cup in Auckland.

But rather than chase the money pic, Clarke put his camera aside to help out and contributed to the re-building of the boat which suffered serious damage to its bow.

“I’ve always prided myself in being more of an all-rounder, so those old skills came back into play,” he said. “The team work to save the boat was second to none. If we did end up losing it down the bottom, we really would have struggled to have get the boat back to how it was sailing again.”

Clarke is open to working on the 37th AC. But for now, he is in Australia, working on the live stream for the 18ft skiffs on Sydney Harbour. He’ll also shoot and film the Rolex Sydney Hobart Yacht Race 2021. When he’s not working, Clarke finds the time to go for a sail, most recently on the TP52 Matador.

Clarke couldn’t be happier with the way his career has pivoted and evolved.

“I’m a firm believer in doing things you enjoy, and I was enjoying photography more and more. And I can still bring sailing into my job, which I’ve grown up with and love. I don’t think I’d be where I am now without that career [as a boat builder],” Clarke said . “It’s interesting how it’s morphed into this, and they both complement each other.”

And does he think his photo is in with a chance to win the contest?

“I feel like if there’s one photo that going to do okay, it’ll be this one.

“It’ll be nice to get some kind of recognition, and if not – you just go again next year!”

For more on Dylan Clarke’s top 20 photo, go to: https://www.yachtracingimage.com/2021/acws.html

For more on Andrea Francolini’s top 80 photo, go to: https://www.yachtracingimage.com/2021/training-session.html