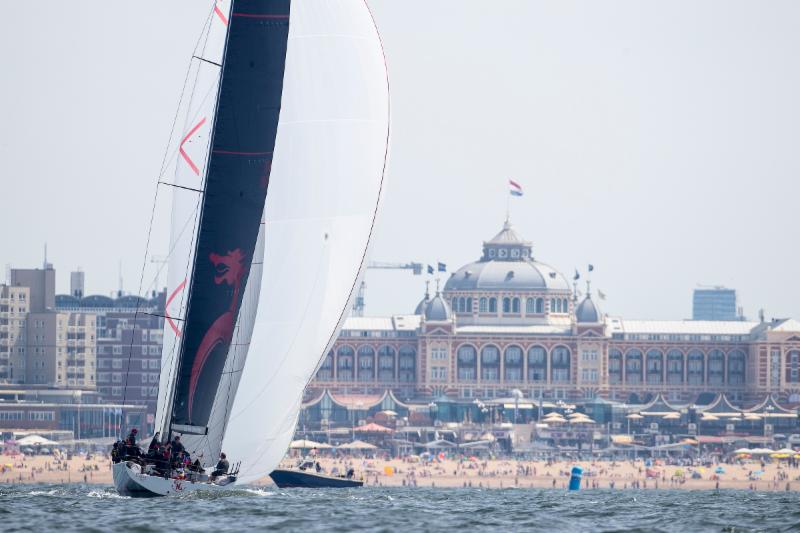 With yet another sunny day on the North Sea coast, in a little gentler winds than in the last few days, another two inshore races were held in The Hague Offshore Sailing Worlds. The completion of the first race prompted a discard of the worst race score for all competitors, with the exception of the twice-weighted long offshore race. And as predicted, this action compressed and reshuffled the results in Classes B & C, making the race for the podium positions even tighter in these classes.

For the first time the Low range of ORC ratings was used to score the first race, but a slight pressure increase prompted race managers to shift to the Medium range in the second race.

In Class A the outcome of this event was clear even with one remaining race in the series: Karl Kwok's Pac 52 Beau Geste (HKG) is the new Class A Offshore World Champion. Barring any major irregularity found when they go through the measurement process tonight for which they might be protested and penalized, this team cannot be caught in the standings. Composed of mostly Kiwis with a mix of other nationalities led by project manager Gavin Brady, the new World Champions are Jim Baxter, Nick Blackman, David Brooke, Chris Cowen, Matt Humphries, Matt Kelway, Patrick Kong, David Lenz, Spencer Loxton, Rob Salthouse, Dave Swete and Jim Williamson.

“Its been a thrilling week of racing here, and we are really pleased with the result,” says Karl Kwok, owner of Team Beau Geste. While Kwok is no stranger to ocean racing – his various boats called Beau Geste have competed back into the 1990's when his ILC 40 competed in the 1995 Admiral's Cup – this was his first-ever World Championship. “The team has worked hard, we were really pushed by Tilmar and his crew [on Outsider], they gave us some great racing. Years ago I was representing Asia [in World Sailing] so I'm familiar with the politics involved with using these two systems in one event, but it seemed work well for us here, and I'm just happy to have raced in such a great regatta.”

It seems that even though they do not have to sail tomorrow since their discarded worse score is only the 1.5 points they shared with Outsider today being tied in the first race, they will anyway just to have more time on the boat.

With a 13-point lead in a 9-boat class going into the final race, Outsider may have a similar lock on the Silver medal position on the podium at the awards tomorrow evening. So the real fight is for Bronze, with the Rotterdam Offshore Sailing Team's Ker 46 Van Uden (NED) led by skipper Gerd-Jan Poortman having a good day on scores of 3 and 3.5, while closest rival Hitchhiker (NED), the Carkeek 40 owned by Bas de Voogd, sailed their discard in the first race putting them 6 points back in the standings.

Almost like Beau Geste, Claus Landmark's Landmark 43 Santa (NOR) has led the series from the start and has a tiny 1.0 margin of victory assured over her sistership, Torkjel Valland's White Shadow (NOR). Yet Landmark seemed cautiously optimistic.

“White Shadow had the upper hand today,” he said. “But I think we've got a good marging on them, if we sail well tomorrow then we'll be OK.”

It could be they were not in a celebratory mood until all their measurement checks were completed in the harbor this evening. At this championship if measurement discrepancies are found by the Technical Committee they refer the matter to the Jury who can then use the ORC rules to prescribe percentage penalties depending on how far out of compliance the boat may be from its measurement trim.

White Shadow had a perfect day with two bullets, doing what they can to close the gap with Santa to bring the gold medal decision into a showdown in tomorrow's final race of the series.

“We lost a lot on Tuesday where we had two bad results and got stuck behind,” said Valland. “But the rest of the week we've had some good sailing, climbing up in the leaderboard day by day. Today we tried to do everything we could to get closer to Santa, and now we are. We're very happy to be at this World Championship, the organization here in The Hague is setting up to be a supreme event.”

Tomorrow they plan to continue what they did today: “We're striking back,” he says.

In the fight for the Class B Bronze medal position Martin Estlander's X-41 Xini Freedom (FIN) came back into contention by discarding a 28-point DSQ in the first race and thus presented a serious threat to Michael Berghorn's X-41 Halbtrocken 4.0 (GER). But even with a second place in the second race, a poor 18th place in this first race will require them tomorrow to fight hard to overcome the current 2-point gap.

In Class C, up until today Patrik Forsgren's modified First 36.7 Pro4U (SWE) had been doing so well that like Santa or Beau Geste their lead looked unassailable, especially after their drop. However, two high scores earned today pushed them back to within reach of the reigning IRC European champion, Gideon Messink's J/112E J Lance (FRA), only 8 points away. Messink and his team have been strong in the inshore racing and scored their only double-digit result today in six inshore races sailed, so the Swedes are worried.

Pro4U's Johan Tuvstedt said “It was a really tough day for us, and tomorrow will be difficult. J Lance is rated 10% faster than us so we cannot control them but they can control us. If we had only ducked one boat we would not be in this position…”

He is referring to a mark rounding where tacking inside on a thin layline rather than ducking made them hit the mark (not that we're counting, but this is the third mark contact for this team!), hook the mark, and in the ensuing chaos have to get the mark off and take penalty turns, leading to an uncharacteristic 24th place earned in the last race. So, its all on tomorrow for the Class C Gold.

Kai Mares's Italia 9.98 Immac Fram is still holding their own in the Bronze medal position, with a 13-point margin over Michael Mollmann's X-37 Hansen (DEN), but no lead is safe in this highly-competitive class.

And while not in contention for the podium due to a huge score for the undiscardable long offshore race, some boats are still fighting hard. One is Ott Kikkas's Italia 9.98 Sugar (EST). “We had our best day of the regatta today with a 1-3,” said Matteo Polli, naval architect of the Italia 9.98 design and trimming main this week. “We have a super-light jib that is fast, and in the first race we were at the pin with speed, tacked and crossed the whole fleet. When you do this the race gets easier than having to battle in the pack for every second.” In fact, a sistership 9.98, Gordon Nickel's OneSpirit (GER), also got in front off the start with Sugar and finished only seconds behind in corrected time to take second in this race.

“This racing is so close on the water, its like being in one-designs,” said Polli. The young Southampton-trained naval architect is on ORC's International Technical Committee, who is meeting this weekend after the event to pursue improvement ideas for the rating system, and no doubt will be looking closely at the results from this event.

“We are so close with everyone that when our rivals on [Frans Rodenburg's sistership] Elke (NED) beat us across the line by only 3 seconds,” he said, “two other boats slid between us in the results! The racing level here has been outstanding.”

One more inshore race is scheduled tomorrow, with the start once again planned for 1100 local time.