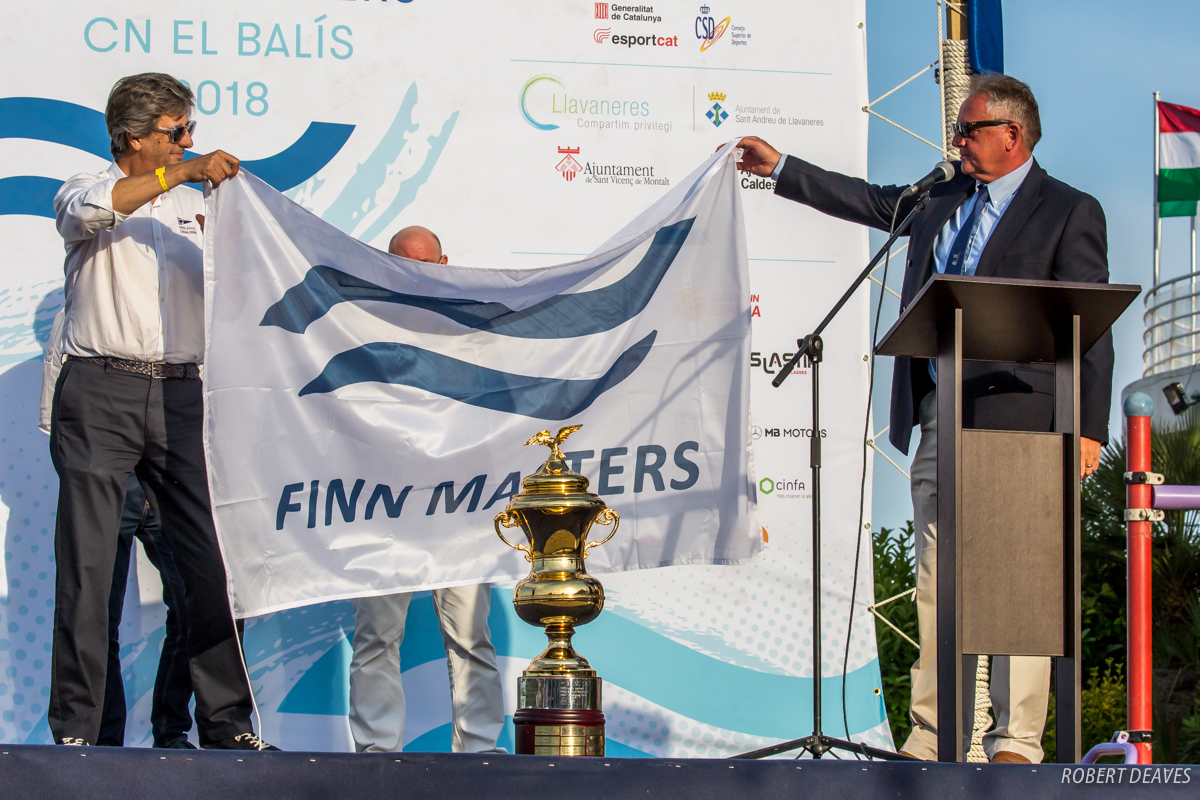 More than 350 Finn sailors gathered Sunday 20 March at the Club Náutic El Balís, in Spain, as the 2018 Finn World Masters was opened under beautiful blue Mediterranean skies, which together with the fantastic Catalan hospitality, made for a finntastic evening.

From the first arrival to the last, every Finn sailor has been warmly welcomed by the club, which has been planning for this moment for three years. At the opening ceremony, the Finn Masters President, Andy Denison, commented on how smooth everything has been running and the welcome everyone has received. “Something is going right here. The attention to detail is outstanding.”

The president of the club, Fran Ripoli thanked the organising team for two years of hard work, welcomed the competitors and then wished all participants good winds for the competition.

Then the Mayor of Sant Andreu de Llavaneres, Joan Mora, said the village was very proud to host such this high level event. “The village has long history of sailing and watersports so this is a unique opportunity to put the village on the map. I want to thank the club and the team working in the event, for always supporting training and sailing.”

He welcomed the participants. “The doors of our village are open at all times, and thanks to the class for choosing to come here. Welcome to the village that shares the values and principle of this sport.”

Next, Miguel Angel Mateo, the President of the Catalan Finn Association and José Maria van der Ploeg, the Spanish Finn Olympic gold medalist in 1992, also took to the stage to welcome all competitors to El Balís.

He began by remembering the Croatian Finn sailor, Luksa Cicarelli, who had entered the event but had passed away while training for the event earlier this year.

Then he invited last year’s Finn Masters Champion, Vladimir Krutskikh to the stage to hand the trophy to the Sr. Ripoli for safekeeping until the closing ceremony next Friday.

Then the event was officially opened by Mr Denison, as is tradition, by handing over the Finn Masters flag to Sr. Ripoll, which will fly over the club until the end of the event.

Earlier in the day the practice race was attempted, but a fading wind meant all races were abandoned. The forecast for the coming week could present some challenges to the race committee with very light winds predicted for much of the week. Most of the training over the past week has been replaced by visits to bars and restaurants, as the wind has been extremely light for several days. However the weather pattern is beginning to change so everyone is hoping that the racing will not be too disrupted. But the sun has been shining and the temperatures rising, so it has been a pleasurable start to the event, despite the lack of sailing.

Racing is scheduled to start at 12.00 Monday, with a series of seven races leading into Friday’s final race and medal race. The fleet of 352 sailors from 32 nations has been split into four groups, on two different course areas. The scale of the event is huge, with boats poked into almost every corner of the northern half on the marina at Port Balís.

While the event is just four boats short of breaking the record attendance of 355, set in 2016, it has broken the record for the most Legends (45) and Super Legends (5), that have entered this year.