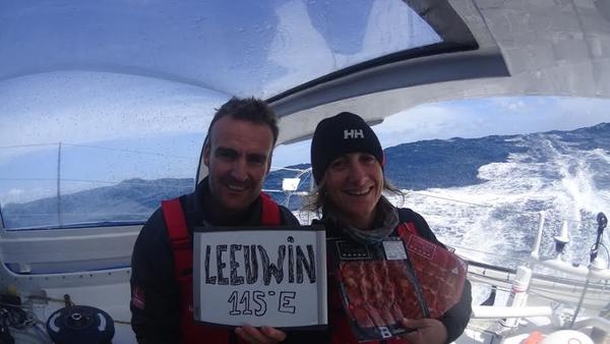 Bernard Stamm and Jean Le Cam lead the Barcelona World Race from the Indian Ocean into the Pacific Ocean at 2130hrs UTC Monday night with a lead of over 240 miles ahead of Guillermo Altadill and Jose Munoz on Neutrogena.

As if on cue Stamm and Le Cam were greeted by a moderating sea state, a glimpse of blue skies and even slants of occasional sunshine as they closed their Indian Ocean odyssey with a 48 hours spell of their quickest sailing yet. Their best 24hrs run of the race, 479 miles, in the period up to 1900hrs yesterday evening.

The Spanish-Chilean pair Altadill and Munoz show every sign of keeping up the relentless pressure that they have maintained on the leaders so far. As the strong breeze abated and the seas dropped, Neutrogena rallied with a 14 miles gain this morning. They too passed into the Pacific at speed, crossing the 146 deg E longitude at 1020hrs UTC, after also passing some 400 miles south of Hobart.

The Cheminées Poujoulat duo were pleased to have passed into the Pacific – even if Jean Le Cam sounded fatigued and typically downbeat – it is the first of three big moments this week for the leaders. This Tuesday after noon they had about 250 miles to make to the midpoint of the theoretical course distance which is now 23440 miles. And racing at 152 deg East, Le Cam was looking forwards to the AntiMeridian or International Date Line, which he said they anticipate later in the week, in around 60 hours. By whatever measure chosen certainly by the week's end they should be getting ever closer to home than further away.

For the chasing pack such milestones are often an important boost to morale, making their own targets feel that much closer.

Monster at Leeuwin Longitude for GAES
In turn GAES Centros Auditivos passed their second Great Cape together early this morning. Anna Corbella and Gerard Marin crossed the longitude of Cape Leeuwin at 0045hrs UTC. The duo took time when they could to celebrate with a photo and some jamon, but they had a very tough night which was precluded by a 'monster' squall, according to Corbella:

“The first squall came as we expected, stronger though, sailing with a sailplan which would take us to 28kts, reef and A7. and then when I was sleeping I heard Gerard shouting:
“Annaaaaaaaaaaaaa Coooooooooome!!!!!!”
“I looked across to the wind indicator and, shit, it said 47kts. I got out as fast as I could and saw Gerard on the helm. Fully concentrated to not lose control. I told him to hang on and I would roll away the sail myself. It is not wise to go on to the pilot. Bearing in mind I was asleep two minutes ago I was on the pedestal winch and was amazed at the speed I could turn it when I needed to.  I kept on and on with all my strength thinking it would be rolled in, but it was not. I looked through the hail and could see that the furler had broken.”

Corbella is about four days quicker to Cape Leeuwin than the last edition which she sailed with British mentor Dee Caffari. She and Marin have made more miles on fourth placed Renault Captur. Jorg Riechers and Sébastien Audigane had around 100 miles to the Cape Leeuwin line this morning and were making 14.8kts to GAES 15+kts.