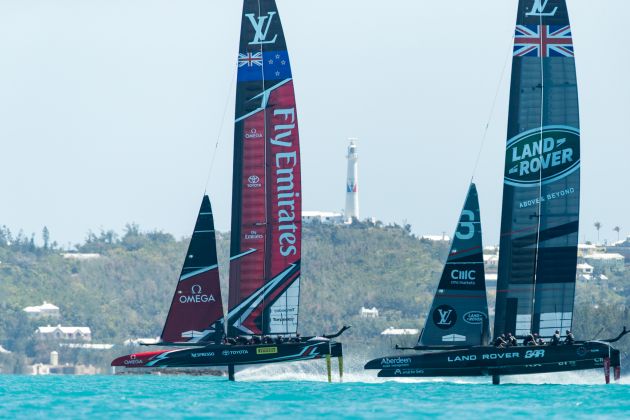 The two boats just before the collision. Photo Hamish Hooper/ETNZ.

The second practice race day today in Bermuda, ended in a heavy pre-start collision when Land Rover BAR collided with Emirates Team New Zealand after they had been comprehensively shut out in last stages of the pre-start sequence.

Peter Burling, on the helm of Emirates Team New Zealand, had done a good job securing the favoured leeward end of the line and shutting out Sir Ben Ainslie and the Land Rover BAR boat.

“It was a bit of a shame in the last pre-start, we had the leeward end of the line pretty locked down, Ben was quite late and just ran straight into the back of us,” said helmsman Burling. “Just unnecessary a week out from the America’s Cup. We are all here to learn and it’s a shame we have a pretty big metre dent now in the back of our nice boat.”

As for the damage: “It went straight in under the media pod with his windward bow and right down the inside of the leeward hull, so there is a pretty good dent there. You can definitely see if has punctured right into the cockpit, right around where my steering wheel is,” continued Burling

Emirates Team New Zealand CEO Grant Dalton upon assessing the damage, “We know Ben well, he is a good guy but frustration is obviously getting to him and the red mist came down and it’s a lot of damage in a time we can’t afford it.”

Other than the damaged sustained it was a positive day for Emirates Team New Zealand, winning both of the races it sailed against Land Rover BAR earlier in the day and Groupama Team France after both Oracle and Softbank Team japan refused to race against the kiwi team.

“Up until the last race with BAR we had a bloody nice day, we got the boat around the track really well, in really nice yachting conditions, but very unfortunate to get a hole in the boat on a practice race. I don't think Ben will be feeling too happy about it at the moment,” said Skipper Glenn Ashby

The Emirates Team New Zealand shore crew were waiting at the dock to retrieve the boat and will now be working around the clock to get the boat back out on the water as soon as possible.