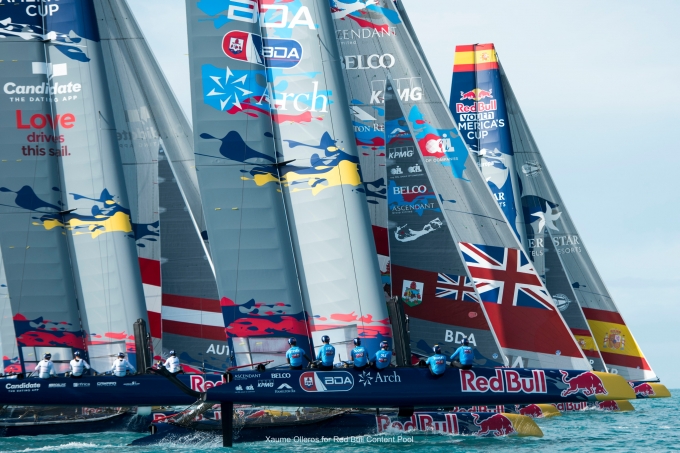 The Red Bull Youth America’s Cup began its 2017 campaign on 12th June on Bermuda’s Great Sound, the same waters that had just seen the conclusion of the Louis Vuitton America’s Cup Challenger Playoffs, and at the end of day one it is the British team Land Rover BAR Academy who will be happiest with their day’s work, finishing on top of the leaderboard.

However, the big story is the local favourites, TeamBDA, who finish day one in third place overall after a highly impressive first day of Red Bull Youth America’s Cup Qualifiers action.

It proved an impressive start to the competition for Land Rover BAR Academy, who won the opening race in emphatic style.

Narrowly edging out Austria’s Candidate Sailing Team away from the start line, the British team, skippered by Rob Bunce, led from start to finish, sailing clear of all of their rivals from the first upwind mark and maintaining a healthy lead throughout the race to claim an impressive maiden victory.

The more interesting battle proved to be between the teams behind the Brits, with a particularly interesting battle developing between Spanish Impulse by Iberostar, Next Generation USA and local heroes TeamBDA, for second and third place.

Perhaps inspired by watching fellow countryman Peter Burling lift the Louis Vuitton America’s Cup Challenger Playoffs trophy moments before the start of race two, NZL Sailing Team put their disappointing performance in race one firmly behind them and took a comfortable victory in the second race of the day and with it, 10 points.

In stark contrast to race one, skipper Logan Dunning Beck timed NZL Sailing Team’s approach to the start line to perfection in race two and they quickly established themselves in the lead. Behind them, Spanish Impulse by Iberostar continued to sail consistently, while Dimitri Stevens’ TeamBDA and Rob Bunce’s Land Rover BAR Academy enjoyed a close-fought battle throughout, vying for third and fourth place.

A victory that rarely looked in doubt was ultimately sealed by NZL Sailing Team who were followed over the line by Spanish Impulse by Iberostar, claiming a consecutive second-place finish and another nine points.

TeamBDA continued their impressive form, managing to hold off intense pressure from Land Rover BAR Academy in the battle for third place, while at the back of the field, a late duel for fifth and sixth place materialised between Next Generation USA and Candidate Sailing Team.

The final race of the first day of the 2017 Red Bull Youth America’s Cup was dominated initially by a fight at the head of the pack between Land Rover BAR Academy and TeamBDA. The Bermudians were then joined by NZL Sailing Team as the British team moved off into the distance but TeamBDA did not lose their focus, sailing brilliantly against the experienced British and New Zealand teams and finally finishing second.

At the end of day one it is the British team Land Rover BAR Academy in first place in the first set of qualifiers, followed by Spanish Impulse by Iberostar, then TeamBDA, much to the delight of the vocal home crowd, with NZL Sailing Team fourth, Next Generation USA fifth and Candidate Sailing Team sixth.

POOL B QUALIFIERS LEADERBOARD (DAY ONE)