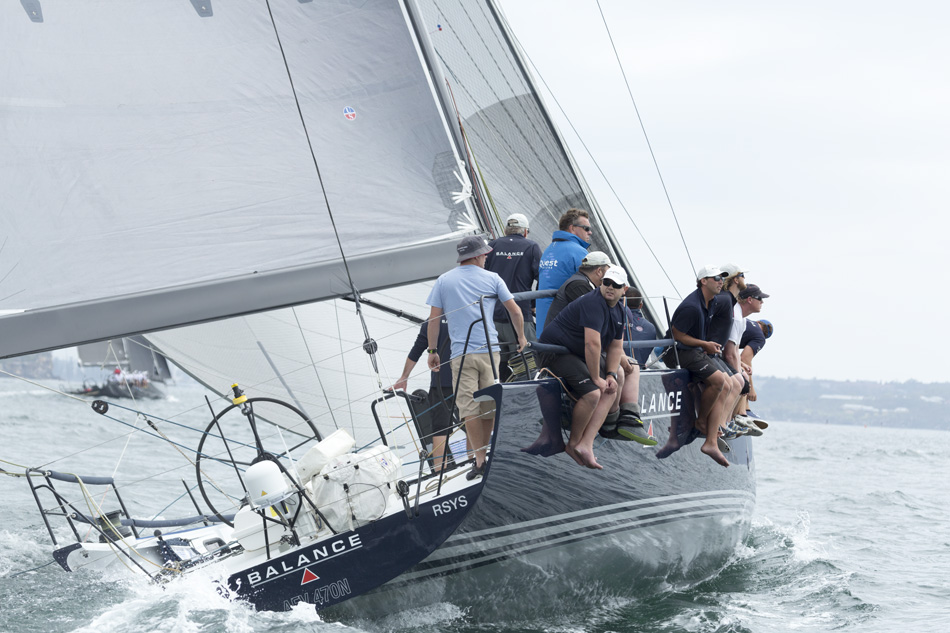 The consistent southerly that drove Balance to her 4 hours 34 minutes 26 seconds record for the 63 nautical mile race was the antithesis of conditions experienced by competitors on Saturday, which resulted in Clitheroe’s boat finishing in 9hrs 20mins 3secs.

“And the year before, we were first boat to finish, but five minutes outside the time limit…,” Clitheroe remembered.

Conditions earlier in the day indicated a fairly quick and enjoyable ride to Newcastle, but a thunderstorm late in the afternoon put paid to that theory.

Denis Thompson, Principal Race Officer, said the day had started well: “We got them away on time in a 10-12 knot southerly. All got off the line easily and left the Harbour in 10 or so minutes.

“Balance (Paul Clitheroe) got a great start at the pin, but there was a whole bunch of boats there that swamped them,” Thompson said. “But Triton (Michael Cranitch/David Gotze) got the best start at the boat end in clear air and to windward of the rest and blasted down the Harbour.”

Clitheroe commented late in the evening: “Once we left Sydney Heads, it was champagne sailing. The sun popped out and we sailed in company with dolphins and mutton birds – and Triton.

But then the thunderstorm struck.

“Around Norah Head we saw the sky darkening. The storm was wild. There was one storm front in Sydney, one at Gosford and one at Newcastle and the storm clouds sucked up all the air.

“It was an amazing day out,” said Clitheroe, describing “breeze from everywhere – due south, south-west, while it was south-east out to sea and as we got into Newcastle it was north-north/east – quite unusual. That’s where we took time from Triton,” he said after finishing just shy of one hour in front of his rival.

Clitheroe said they had seen the storm warning from the Bureau of Meteorology and expected to see as much as 60 knots, “but the most we saw was 17 knots all race. It could’ve been different for those behind us.”

But according to Wax Lyrical’s owner, Les Goodridge, who finished just after 11pm, 17 knots was the most they saw also.

“We had zero knots for hours on end. There were big holes in the course and we sat around doing nothing. We went through the storm cells, but there was no breeze in them. The issue wasn’t too much wind – the issue was not enough.

“Newcastle Yacht Club stayed open for us and had a drink waiting, so that was great,” he ended.

Despite the weather, which caused four retirements, Clitheroe says, “It’s one of the nicest races we do. More boats should do it.”

One race remains to decide the series. About Time is in the box seat to claim both IRC and ORCi overall honours. She has a three-point buffer over Balance in both IRC and ORCi. It will be a close call between the nine-time OPS champion and the 2015 Rolex Sydney Hobart and Blue Water Pointscore winner, both well in front of the rest of the field.

Col and Denise Wilson’s Never a Dull Moment leads the PHS component of the series from Wax Lyrical, with About Time third.