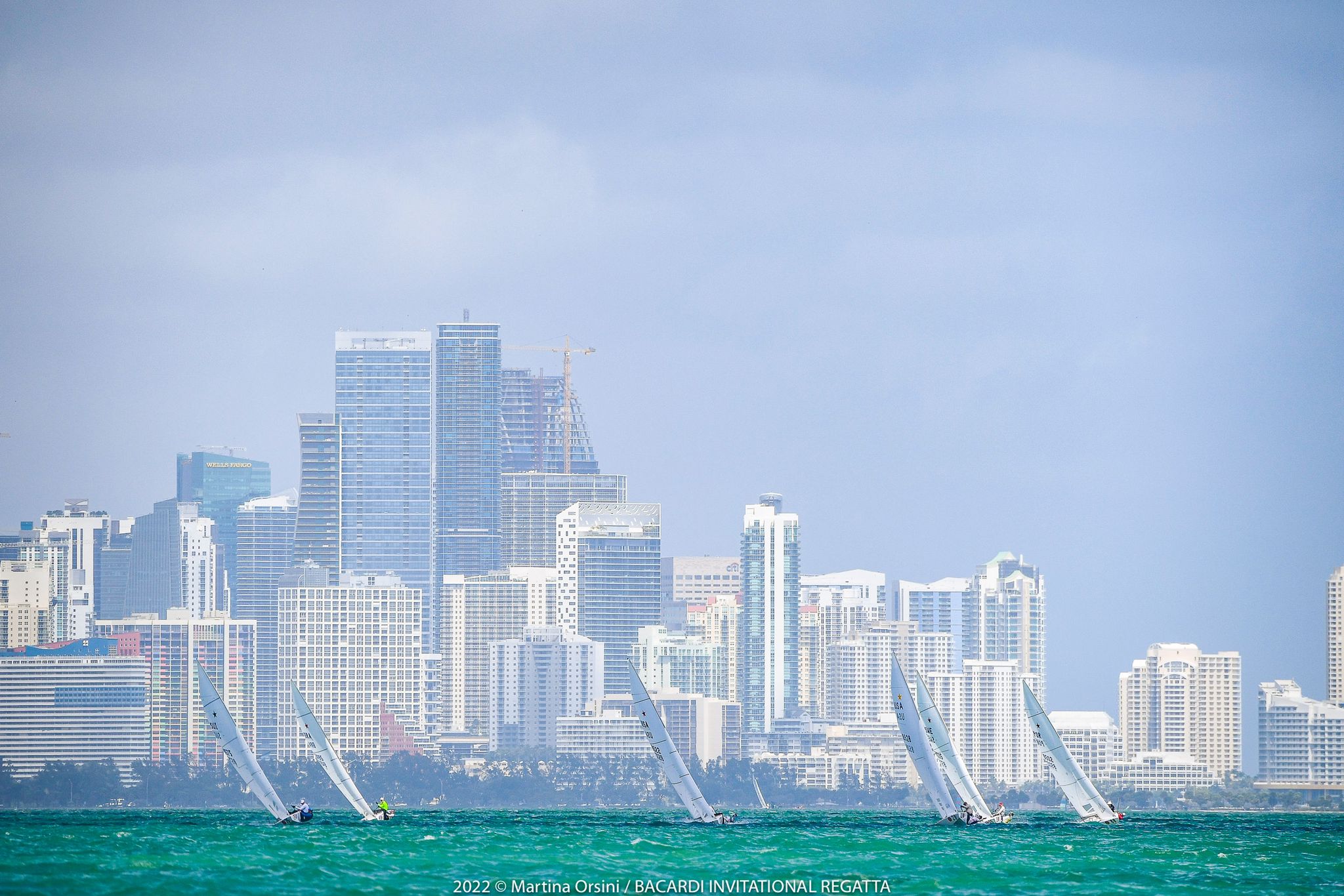 Race 2 of the 95th Bacardi Cup got underway on attempt number two, after a bunch of ambitious teams in the middle of the line forced the Race Committee to a general recall.

A perfect day delivered as good as Star Class racing gets, with a consistent south-easterly breeze of around 12-15 knots, waves serving up full hiking upwind legs and super surfing conditions downwind for the 110 minutes, nine nautical mile race.

Behind Kusznierewicz/Prada, it is tiebreak between Eric Doyle/Payson Infelise (USA), who won here in 2019, and brothers Peter O’Leary/Robert O’Leary (IRL) who sit on five points apiece, having matched each other’s scores across the two races. 2018 Bacardi Cup victors Diego Negri/Sergio Lambertenghi (ITA) are in fourth.

Kusznierewicz/Prada know the nuances of Biscayne Bay well, opting for the left side upwind, before making a faultless tactical decision to move to the right side and find the increasing pressure for the final part of the first upwind. The leaders were chased hard by Augie Diaz/Christian Nehammer (USA), Peter O’Leary/Robert O’Leary (IRL), Eric Doyle/Payson Infelise (USA) and Jack Jennings/Pedro Trouche (USA), who had all made a break ahead of the fleet.

The teams who played the left side of the track got crushed and a significant number overstood the port tack layline, leading to a crazy and close mark rounding.

Downwind the easing breeze consolidated the fleet, picking up as teams rounded the gate to again favour the strong and experienced who flew back upwind. As before, a significant gap unfolded between the top seven boats and the rest of the fleet. Heading upwind, Kusznierewicz/Prada extended their lead, with Diaz/Nehammer, the O’Leary brothers and Diego Negri/Sergio Lambertenghi battling (ITA) it out for second place.

On the final downwind the O’Learys made a key move, pressing Kusznierewicz/Prada every step of the way, as Peter explained, “Robert decided we would go round the other gate, at the bottom left looking down, and he was spot on. We gained a nice bit of space and were able to get close to the leader.”

Onto the final upwind, the brothers got forced a bit past the layline, giving Doyle/Infelise the advantage to move into second by a couple of meters, the Irish in third and Italians fourth.

“It was proper racing,” continued Peter. “It is as close to an Olympic standard as you are going to get. There was very little between the boats.”

Doyle/Infelise were pleased with their score, having chipped their way through the fleet to get back on form and pop the result after an uninspiring start.

“It was beautiful tough sailing, it’s a super competitive fleet,” said Infelise. “The key was to sail by yourself, get going fast, hit the shifts when you can and just keep the boat moving as quickly as you could.”

“Everywhere you look you are turning around and looking at a World Champion or a silver Star, so super competitive. I think it is the most competitive we have had in a few years here. It is really nice to have all the Europeans and everyone back here.”

Another fourth place finish from Italy’s Negri/Lambertenghi positions them three points behind the Americans and Irish.

“More or less the performance was even worse than yesterday,” commented Lambertenghi as we caught up with him relaxing post-race in the pool.

“We were a little bit slower I think, because it was lighter than yesterday, and we were not so brilliant as we felt yesterday. But anyway, we had a good race, a couple of mistakes on manoeuvre on my side and a couple of small mistakes on the tactics. We had fun and we had the same result as yesterday and we are quite satisfied – not 100 per cent, but good!”

For the full results, see: https://yachtscoring.com/event_results_cumulative.cfm?eid=14633

The camaraderie continued into the evening, as teams headed to Coral Reef Yacht Club for the Bacardi Happy Hour.

With four races ahead to complete the six-race series, and one discard coming into play after race five, there is plenty of race track brilliance to come and plenty of luminaries ready to make their move to lift the hefty silver Bacardi Cup and Tito Cup trophies come Saturday, March 12.