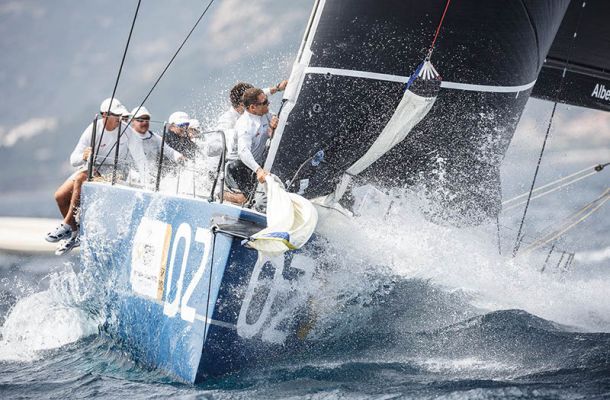 It is the second time in four years that Azzurra have won on their own home turf, adding to their 2013 triumph at this regatta. They avenge the 2014 World Championship win of Quantum Racing on these waters, the teams sitting 2-2 now in terms of Sardinian honours on the 52 SUPER SERIES.
Azzurra

Azzurra trailed Quantum Racing by two points when the nine boat TP52 fleet went afloat from the Yacht Club Costa Smeralda early this morning, seeking to outrun the 35 knots forecast for the afternoon. Even at that it proved the breeziest and most exciting race of the season, a 25 knots foam up which saw the Azzurra team keeping tight control, showing off their big winds prowess which has been their passport to success many times.

Even tactician Vascotto, who raced on the Straits race course many many times over the 25 years he has raced on the Costa Smeralda, confirmed today was the first time he had raced in the wind direction 135 degrees on the windward-leeward loop off the Bay of Sardinia. And so it was on what he saw and the water, plus the tidal current advantage on the left of the course, that contributed to their winning choice of the left side of the first upwind.

Spurred perhaps by having lost a photo finish to Quantum Racing by two metres on Friday, Azzurra bolted from the pin end of the line with a perfectly timed start to reap the dividends on the left side of the course, to lead around the top mark. With Quantum Racing in fourth the championship was in the balance. A stunning first run from Quantum Racing, owner-driver Doug DeVos sailing an accomplished smooth downwind in the fast, 25-28kts gusty, squally surfing conditions, took the 2014 champions up to second, chasing Azzurra in second, just two boat lengths.  But after making the wrong call up the first beat, unfortunately the champions got it wrong again on the second. A left shift brought Platoon, Alegre and Gladiator back into the top group. While Azzurra raced away to hold Gladiator off across the finish line, Quantum Racing could only make sixth, leaving the blue hulled home team as champions by three points.

Adding something of a hollow, but moral extra win, Azzurra were ahead in Race 8 when it had to be called off when the wind almost went off the scale, gusting up to close to 40kts at times.

Vascotto, holding an ice cold Sardinian beer, smiled: “In fact I have never sailed with that true wind direction on that area before. It is new for me and I have sailed here for 25 years. My first regatta here was in 1991. We tried to understand what was best here very quickly. We chose the left because there was half a knot pushing with us in that corner against half a knot of current the other way in the other corner. There was more split breeze, more left on the beginning of the left. It worked and we are happy.”

“It is a fantastic result for the club but I am especially happy for the Roemmers family who put so much effort into this class. And to skipper Guillermo Parada, he had a hard time and worked very hard after Valencia and we are rewarded.”

Azzurra’s winning scoreline included three victories on the windward-leeward courses, pipping the 2014 series and world champions Quantum Racing by four points in the regatta standings. Russian flagged team Bronenosec won both coastal races and one windward leeward but bookended an otherwise impressive set of scores with ninth places in the first and last races. They take third on countback ahead of Ergin Imre’s quietly consistent Provezza team.

Second for Doug DeVos, who had not steered his TP52 for 18 months, since winning Key West in 2014, is an excellent result. He will be back to helm at the Copa del Rey but Ed Baird will steer for the TP52 World Championships Puerto Portals, Mallorca next month when Valencia champions Rán Racing return to the fleet.

Terry Hutchinson (USA) Quantum Racing’s tactician this week, concluded: “I actually think we sailed the boat pretty well. When you consider that Doug has not raced a boat in 18 months and we were two points up going in to today, it was always going to be a challenging day.

“In retrospect this is a great result considering the time that Doug has steering the boat. He did such nice work. He is so intense and focused on steering the boat and he allows me to stay on him and we have a great relationship like that. And then you look through our team, seeing how good the team is from front to stern. It is an awesome week of sailing. It is hard to complain.”