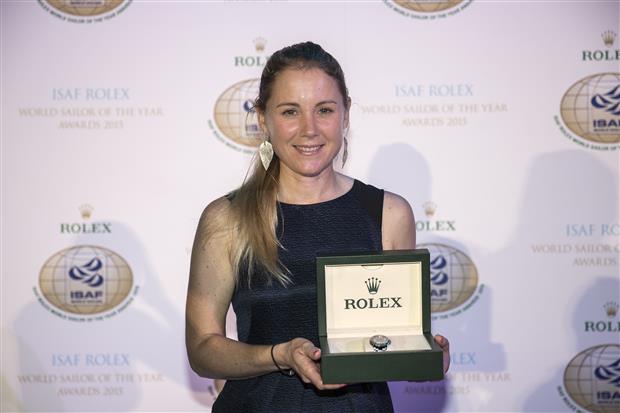 A night under the stars in Sanya, China set the scene for the 2015 ISAF Rolex World Sailor of the Year Awards.  Determination, persistence and the pursuit of excellence were clearly shared among the impressive list of nominees for this year’s awards.

Beginning with Sir Peter Blake and Sir Robin Knox Johnston, the winners back in 1994 when the World Sailor Awards were initiated, the trophy reads like the definitive who’s who in yachting.

The accolades have continued over the years and it was with great anticipation that Carlo Croce, President of the International Sailing Federation announced the winners this evening crowning Sarah Ayton, Peter Burling and Blair Tuke as the 2015 ISAF Rolex World Sailors of the Year.

Addressing the 500 guests in attendance, the President of the world governing body of sailing said: “This award is truly a special recognition for an individual or pair of sailors that has stood out during the year.  It is a culmination of hard work and endeavor, combined perhaps with a bit of good fortune. Most nominees are here tonight, and if they are not, they are doing what they do best – sailing.”

This year’s winners of the male ISAF Rolex World Sailor of the Year Award are the talented duo from New Zealand campaigning in the 49er for the 2016 Olympic Games in Rio. Peter Burling and Blair Tuke have dominated the sailing scene over the last year, winning ISAF Sailing World Cup regattas, Aquece Rio – International Sailing Regatta and the Trofeo Princesa Sofia, while also competing in the America’s Cup World Series with Emirates Team New Zealand.

Currently preparing for the 49er Worlds, the pair could not attend the ceremony but commenting on their win from Buenos Aires, Blair Tuke said: “It is a really big honour for us to win this award.  We don’t sail and race to win these awards, but it is really nice to get these accolades for all the hard work we put in. We are really proud to have won.”

“All the nominees have achieved some awesome things this year in our sport, especially Ian Walker for winning the Volvo Ocean Race.  We’ve been working hard all year and the results have come our way, not only in the 49er, but also in the other boats we sail.  So we are looking ahead, keeping the hammer down towards the Olympics and then to bringing the Cup back to New Zealand.”

Double Olympic gold medalist and the only female competing in the Extreme Sailing Series, Sarah Ayton (GBR) was awarded the female ISAF Rolex World Sailor of the Year Award.

After commending her fellow nominees, the golden girl of British sailing, Sarah Ayton commented: “It means such a lot to me to have won the Rolex World Sailor of the Year Award. I’m truly touched and proud. I hope to continue being an inspiration to women, young children and individuals who enjoy the sport that we love so much.”

The ISAF Rolex World Sailor of the Year Awards took place during the ISAF Annual Conference, the most important gathering of the year for the top athletes, leaders and decision makers in the sport of sailing.

These prestigious Awards, sponsored by Rolex since 2001, are the highest recognition a sailor can achieve and are based on a sailor’s results over a twelve-month period (eg. from September 2014 to the end of September 2015).

Competition for the 2015 Awards was remarkable, with five outstanding female and five equally exceptional male candidates short-listed from a list of nominations made by the public at large.

The Member National Authorities (MNAs) votes were tallied earlier in the day and then each guest at the ISAF Rolex World Sailor of the Year Awards ceremony had the opportunity to cast one vote.  It was an evening of intense suspense and anticipation, for both the nominees and guests in attendance.

The winners were presented with a Rolex timepiece and the ISAF Rolex World Sailor of the Year trophy.

The nominees for the 2015 ISAF Rolex World Sailor of the Year Awards were as follows: