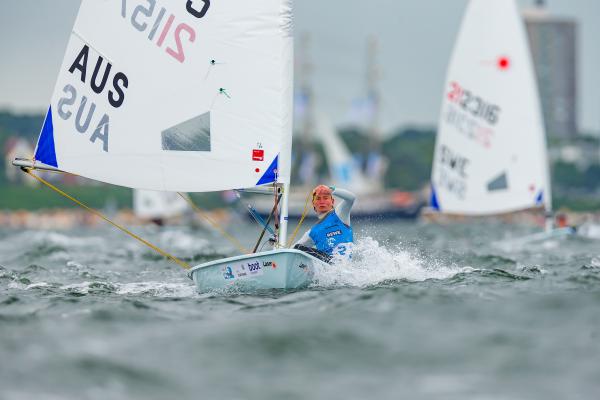 Day 8 of Kieler Woche started out extremely windy, forcing the race committee to postpone many of the fleets later in the day. Here are the fleets that completed today’s racing before 6pm.

It was tough going in the big waves on one of the courses further out to sea. In the first of two heats, series leader Zac Littlewood led from start to finish, winning the race at a canter. However the Australian struggled in the next, only managing 7th place, his worst finish in an otherwise very consistent set of scores that includes 5 wins from eight races.

Another Australian, Caelin Winchcombe, struggled in today’s conditions and after a capsize falls from second to fourth overall, while two Polish sailors move into silver and bronze positions.

Aleksander Arian was flying in the last race and might have won had he not been given a yellow flag Rule 42 penalty for getting too kinetic with the way he was sailing his boat. Even after taking his 720-degree penalty, Arian still finished third across the line. Scores of 4,3 from today put Arian in second overall, just two points ahead of fellow countryman Marcin Rudawski.

470 Women
Two German crews have led the standings all this week in the 470 Women’s fleet but slipped down the order today. Maria Bozi and Rafailina Klonaridou of Greece now take the lead with a five-point advantage over Agnieska Skrzypulec and Jolanta Ogar of Poland. Sitting in third overall, Silvia Mas and Patricia Cantero of Spain are just one point behind the Poles.

470 Men
Anton Dahlberg and Fredrik Bergstrom have sailed a very consistent series in unpredictable conditions, the Swedes rewarded with a three-point advantage over the Australians, Mat Belcher and Will Ryan. France’s Kevin Peponnet and Jeremie Mion move into the top three for the first time this week, a point ahead of Luke Patience and Chris Grube of Great Britain.

49er Men
Yesterday the top four teams were all within a point of each other but the gaps began to open up today after two testing races in the shifty conditions. Olympic Champion of 2008, Jonas Warrer crewed by Jakob Jensen, scored 8,1 today, moving the Danish crew to a nine-point lead over the Spanish brothers in second, Federico and Arturo Alonso. Just 0.6 points behind them are another Spanish team in third place, Diego Botin/Iago Lopez.

Laser Standard
Series leader Elliot Hanson admits he played a ‘get out of jail’ card today. In the first race the British sailor finished 17th overall and things looked even worse at the start of the next race when he was forced to take a 720 penalty soon after the start gun.

“Luckily I had the opportunity to sail low on the reach when the rest of the fleet went high and I managed to pick up about 25 places before the next mark.” Hanson burst into the lead, won the race, and now holds a three-point lead over Philipp Buhl from Kiel.

It looks like tomorrow’s Medal Race will see some match racing between the Briton and the German, while 13 points further back will be a battle for bronze between Finland’s Kaarle Tapper and Croatia’s Tonci Stipanovic, the Rio 2016 silver medallist.

Nacra 17
John Gimson and Anna Burnet go into the final day maintaining their lead over the Nacra 17 fleet. The British duo now holds a six point advantage over Jason Waterhouse and Lisa Darmanin in second place. A third place in today’s final race has lifted Austria’s Thomas Zajac and Barbara Matz to third overall. However, it’s not much of a points gap back to fourth and fifth place, respectively the New Zealand and Danish teams.

2.4mR
In the 2.4mR keelboat class, the reigning Paralympic Champion Damien Seguin continues to hammer home his advantage with bullet after bullet on the scoreboard. Seven victories from eight races put the Frenchman 10 points ahead of Heiko Kroger who sits 17 points clear of fellow German, Lasse Klotzing.

Other Fleets
At the time of writing, other fleets were still to complete their racing for today. Maxime Jonker of the Netherlands continues to lead the Laser Radials and the Dutch women have also been going well in the 49erFX.

In the Finn the battle was shaping up to be a battle between two Kiwis and two Brits. Piotr Cichocki of Poland is dominating with race win after race win in the Hansa 303 fleet.