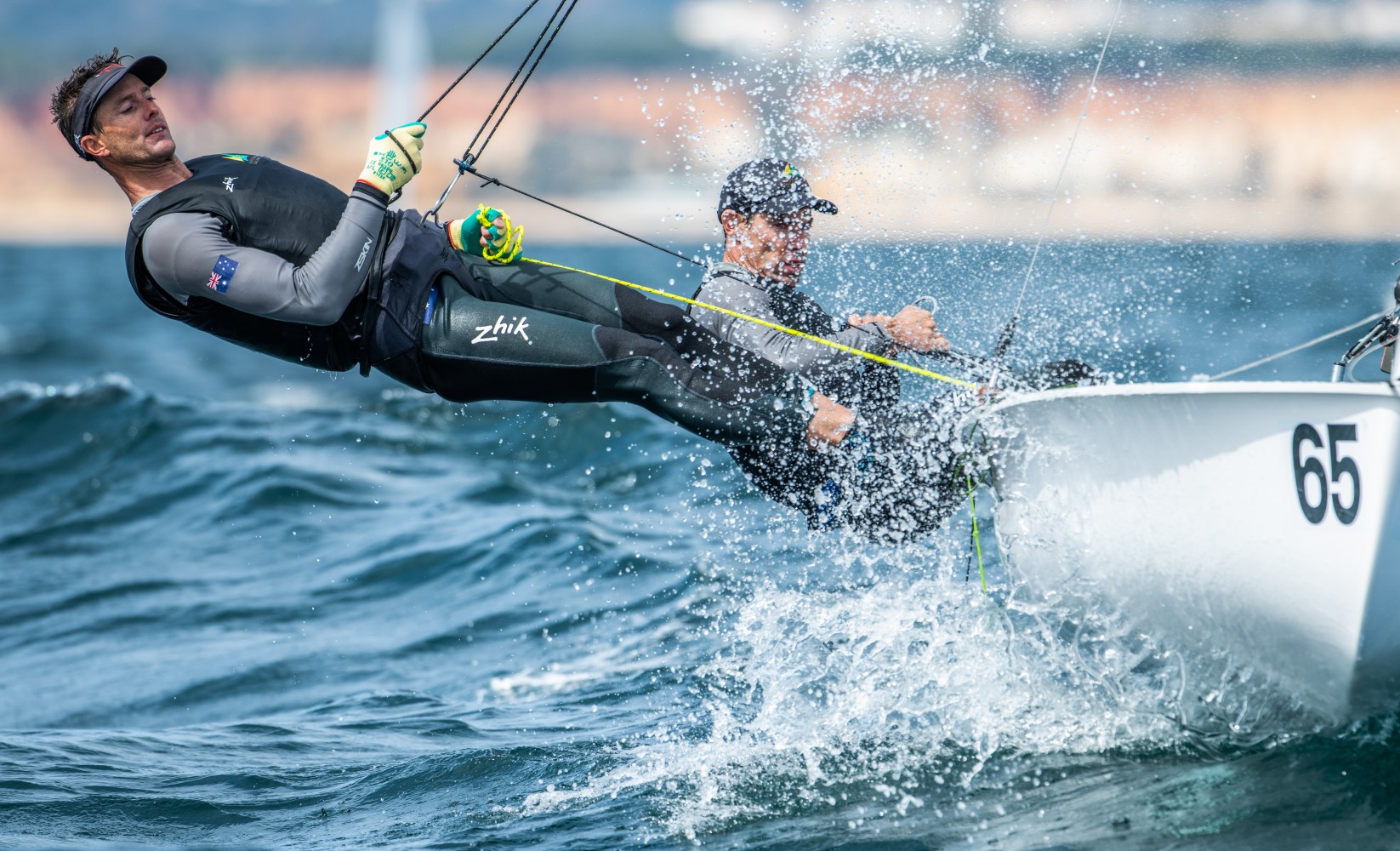 With less than three months until the Tokyo 2020 Olympic Games, Australia’s two 470 representative teams have been given the opportunity to join the international fleet at the class’ 2021 European Championship in Vilamoura, Portugal.

Eighty-one teams from 25 countries are contesting the last major 470 event before Tokyo 2020 and the first international regatta since August 2019 for Australia’s Mat Belcher and Will Ryan in the men’s division and Nia Jerwood and Monique de Vries in the women’s division.

Many of the European and northern hemisphere teams are match fit having contested the class’ world championship at the same venue back in March. Travel restrictions and safety concerns kept the Australians training hard and working towards their goals on home waters.

Defending 470 silver medallists from the Rio 2016 Olympic Games, Mat Belcher and Will Ryan, were finally able to gauge a baseline in the men’s competition and posted a win on day one, but Belcher knows they are at a disadvantage in a racing sense.

“Will and I will get a lot of confidence from reattaching ourselves with the fleet and getting a baseline,” said the seven-time 470 world champion and skipper of the gold medal-winning team at London 2012.

He knows they must get a handle on the venue’s variable conditions quickly and is excited for the chance to challenge 34 out of the 40 men’s Olympic 470 teams in the coming days.

“There were some really good lessons today. It was nice to get a race win to start the final push to Tokyo. Conditions are challenging and a lot of competitors have been based here for the last few months – we are definitely on the back foot in terms of racing and getting dialled in.

“We are super happy with where things are at and our goals coming to this European series,” Belcher added.

Just three points separate the leaders, the Spanish, from the eighth boat, a positive sign of things to come.

On Sunday May 2 an early northerly land breeze transitioned to a thermal around 2pm and the first of three scheduled races got underway.

A postponement followed by three afternoon races made for a tough 6.5 hour championship opening bout for Fremantle’s Nia Jerwood and Monique de Vries.

“We sailed well in the first two races but missed a shift on the second last upwind of the final race and couldn’t recover. We feel ok with our first day results and have lots to improve on for the rest of the event. Monique and I had a tough practice regatta and were a little rusty on our tactical positioning so we went into today with a focus on improving our racing tactics.”

The 2021 European Championship format is 11 races and a medal race on May 7 for the 10 highest ranked boats.

Australian Sailing’s Director – Tokyo 2020 Olympic Campaign, Iain Murray, is following and debriefing with both teams from Sydney and says, “We are fully aware of how lucky we are to be travelling and competing in Europe at this time. The teams will travel under the strictest of travel protocols, which have been developed in conjunction with and approved by the AIS and Australian Government and will include two weeks of quarantine when the athletes get home.”