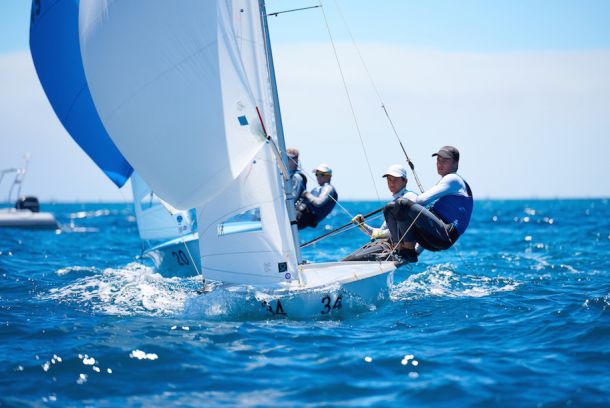 The Championships are one of three events (Nationals, AUS Youth Championships, Queensland Youth Week) to select the 2015 Australian Sailing Youth Team to contest the 2015 ISAF Youth World Championships in Malaysia in December and competition for the selection points was tight. The final day of racing saw the 175 crews get two more races in after a week of uninterrupted racing in fantastic conditions to make ten races across all fleets.

Windsurfer Jock Calvert (TAS) had already secured the Championship title on the penultimate day and finished off the regatta with a series of ten straight wins in the Techno 293 class. It is the third consecutive Australian Youth Championships title for Calvert and despite being the dominant windsurfer he was complimentary about the competition within the fleet:

“It was a surprisingly tough regatta. I came here with the expectation to win but was pushed really hard by the young kids, which is exciting for the future development of the sport.”

The podium spots were much of a family affair with Jock’s brother Angus Calvert moving into overall second on the last day. Queenslander Emma Baillie finished overall third and with this result secured the female youth champion title.

“My brother pushed me really hard and finished second overall which means a first and second for Tassie for the second year in a row. We have a close competition amongst the two of us and the results show that we've a good squad and that what we're doing is working. So hopefully we'll have a few more kids coming through at the next few regattas,” Jock Calvert said about the family competition and the Tasmanian State Performance Sailing Program.

420 sailors from New South Wales Alec Brodie and Xavier Winston Smith (NSW) had an excellent regatta and had an impressive 22 points lead over of the second male crew and overall third James Grogan and Nicholas Sharman (VIC) going into the final two races.

After winning three out of ten races and posting two seconds, a 13th (drop) and second was enough for the pair to seal the deal on a tricky final day as Xavier Winston Smith explained:

“We were actually surprised that we got the win in this regatta with two races to spare because it was a really shifty week and everyone else went up and down, but we managed to stay consistent.”

About the competition for the ISAF Youth Worlds spot he added: “With regards to the Youth Team selection we got the win in this series but it's going to be tight on points so we'll have to wait and see how we go in Queensland in July (final selection event). We’ve really been putting together everything we’ve been training for at this regatta and can’t complain. We were a bit disappointed with our nationals results and just wanted to come here and show what we are capable of. We’re really happy with the result so we're going to go home and have a short break and then get back into training for the next regatta.”

Locals and recent 420 national champions, 2014 Australian Youth Team members Emerson Carlberg and Lachlan Gilmour had a come-back on the final day and made up for an average week by winning the last race of the event to finish fourth overall.

“We did well in the previous regatta (nationals) and maybe got a bit complacent on the first day here but we’ve been knuckling down and trying to get back into it and it was great to finish today with a race win. The last couple days have been pretty tricky with the conditions and we just struggled to find consistency in our racing.”

It was the last 420 regatta for the pair as they are looking to pursue other boat classes to better suit their body size as 16-year old Emerson explained: “I’m a bit big to be at the back of the boat in the 420 and other youth classes, but I’d like to find a class to finish off my last Youth Nationals in 2016. In the long-term the 49er would be my interest.”

Lachlan Gilmour who turned eighteen this week and has been a member of the Australian Sailing Youth Team over the last two years is looking to pursue some 49er and match racing in the future as he said after racing: “Our goal was to win the nationals and we did that. We probably won’t be continuing on the 420 path after this regatta. So the Youth Selection was not really a priority and gaining the racing experience for future classes was more important. But we did manage a come-back today and it was great to finish the regatta with a win. ”

WA locals and recent 420 National Female champions Nia Jerwood and Lisa Smith had continuously moved up the ranks in the mixed fleet and finished the regatta in a strong second overall and top female boat. The 420 National Champions and 2014 Australian Sailing Youth Team members had a convincing regatta, including three race wins in light and shifty conditions, which suited the pair as Nia Jerwood explained:

“The ‘Freo Doctor’ stayed away, so it’s been good for us with some light winds and shifts. We like the tricky conditions a bit better than the heavy ones as this also means we can get the upper hand on the boys.”

It was one of the tightest battles of the championships with a couple of changes on the leader board throughout the week between recent national champions and 2014 29er Open World Champion Kurt Hansen with 2014 Australian Sailing Youth Team new crew Jim Colley and Queenslanders Kyle O’Connell with Tom Siganto.

The two crews entered the final two races tied on points, which made for an exciting last day. O’Connell and Tom Siganto emerged as the final winners. Even though they were excited about the win, the battle for the 2015 Australian Sailing Youth Team spots for the World Championships will now continue to the deciding event in Queensland in July with Hansen/Colley winning the Nationals and O’Connell/Siganto the Youth Championships.

“It was a tough day out on the water, really shifty so we just tried to keep it together and stay out the front. It was always going to be a hard race being tied on points but we just stuck with Kurt and Jim on the start line and pushed ahead of them” Tom Siganto said. “Yeah, we’re pretty excited, it’s a good feeling. We’re also a bit relieved that it’s over for now because it’s been pretty stressful going into the last day, knowing how close it’s been.”

“It was all up to the last race so we did well.  We’re happy now so we’re just going to relax and take a little bit of a break and then get back into it later in the year to prepare for Queensland Youth week where the battle will be decided.”

Despite being the local Young found the conditions quite challenging: “It was an extremely tricky regatta. I went into the final race on equal points with Conor so it could have been anyone’s race and there were lots of wind shifts out there, but I was lucky enough to come away with the win. There’s been a lot of offshore, shifty winds all week so you can go from first to the middle of the fleet really quickly and you’ve got to be on your game the whole time.”

The WA Laser Radial squad coached by dual world champion Tristan Brown is strong, which showed across the results: “It was good sailing against Conor because he’s my team mate and training partner and we really pushed each other the whole regatta to our limits, and that showed with a top two placing for both of us”, Alistair Young acknowledged his Fremantle Sailing Club mate.  “I won the Youth category at the Open Nationals last year but this is the first year I’ve won the Youth Championships outright so that’s really great.”

2014 Australian Sailing Youth Team member Alistair Young is aiming to make it his second Youth Worlds this year: “Youth Worlds are the aim looking ahead, but I have to go to Queensland first and then it’s hopefully off to my second Worlds. Next up I’m going to get back into training and compete in some local regattas including the Western Australian States in preparation for Queensland.

It was a battle in between sisters in the female Laser Radial fleet with Western Australian Jacinta Ainsworth winning over her younger sister Elyse Ainsworth, who went into the final day in the lead.

“I had a great regatta, having just won the Australian Girls’ Youth Championships in the Laser Radial”, winner Jacinta Ainsworth said. “It was close, hard racing but I managed to come away with the win in the end. I was in second place on the second last day and my sister was in first place, so when I turned up on the last day, I just stayed open minded and believed that anything was possible.”

“It’s a phenomenal achievement to win, a real honour – lots of great sailors have won this regatta and it’s amazing to have done the same as them. From here I’m aiming to win the Girls’ Queensland Youth Week, which will finalise selection for the ISAF Youth Worlds.”

In the Laser 4.7 fleet, which is not part of the Youth Sailing World Championship, Zac Littlewood won the Australian Youth Championship title ahead of Victorian Tyrone Gowans and Caelin Winchcomb (WA) in third. WA’s Zoe Thomson finished the regatta as the top female Laser 4.7 and overall fifth.

The Hobie 16 multihull fleet was won by NSW crew from Vincentia Will McKenzie and Patrick Butler. The pair won the last three races of the regatta and was able to pass Shaun Connor and crew Sophie Renouf (NSW) who had been leading the fleet all week and up to the final day.

The 2015 Australian Youth Championships were held at Fremantle Sailing Club, WA from January 6 – 10 2015 and the local organising committee put on an unforgettable event for competitors and supporters alike.

“This was probably the best Youth Championships I have been at, and I have worked at most of them. Everything was great, we had the best resourcing, commitment of the club, and everything and everyone was brilliant”, Nick Hutton Principal Race Officer said at the conclusion of the event.

Host club for the 2016 Australian Youth Championship will be Woolhara Sailing Club, NSW

Before then the top Australian Youth Championships Laser Radial and 420 boys and girls will be the guests of the Japan Sailing Federation at the annual Australia/Japan Youth Sailing Exchange in September.  This will be the fourth year of this exchange and is highly valued by both countries

Full results are available at: http://sailingresults.net/site/event/64/default.html