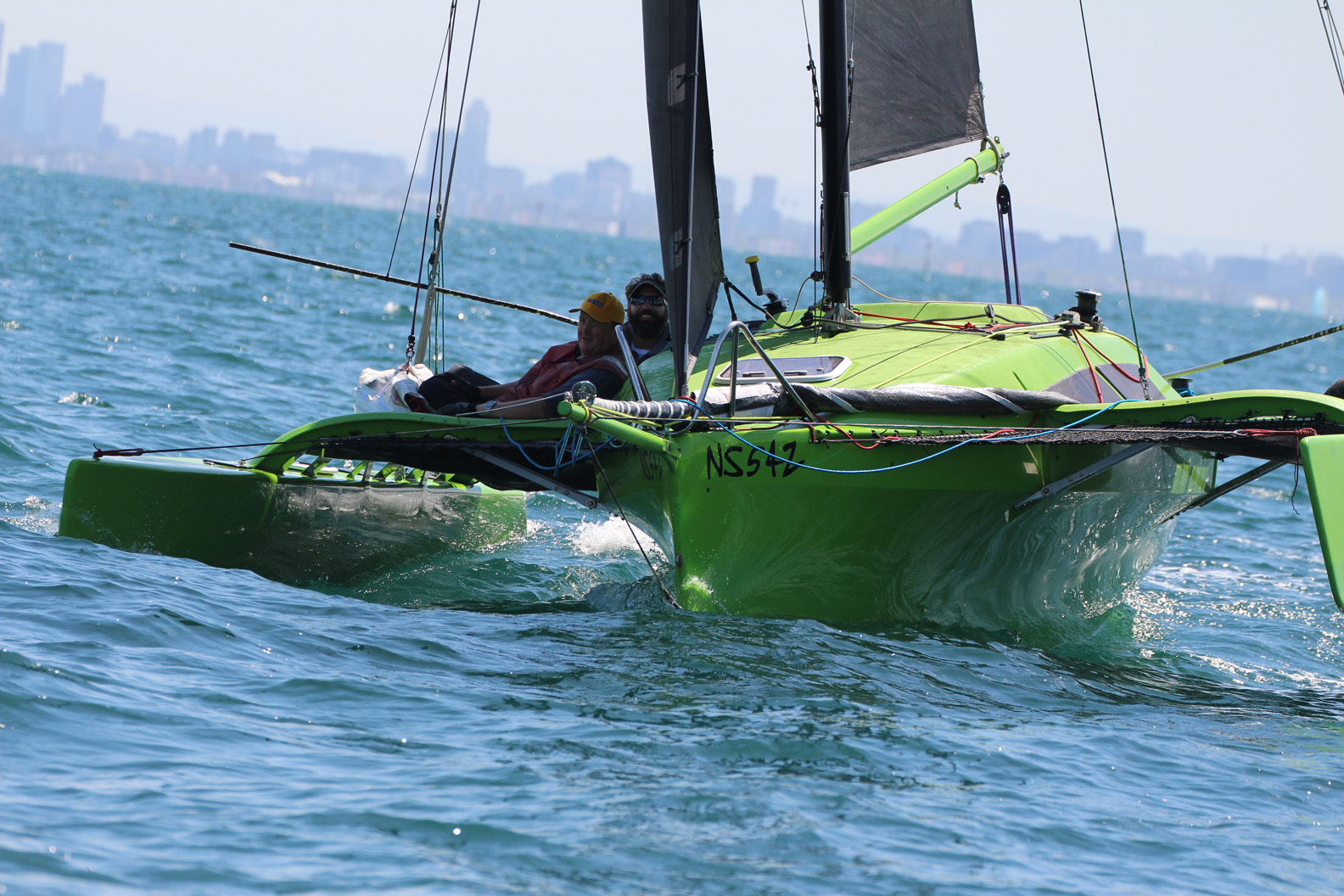 Light sea breezes of 5-8 knots and flatwater closed out the final races on Port Phillip, eight in total for the IRC fleet and six for the multihulls.

Matt Allen’s Sydney-based TP52, Ichi Ban, top-scored across many of the seven windward/leewards plus the single passage race to record a series win by three points from Marcus Blackmore’s Hooligan.

This is Ichi Ban’s second consecutive Championship win. “Our success was based on teamwork and everything we’ve learned about the boat over the last year,” Allen’s longtime tactician, Gordon Maguire, suggested.

“Things go wrong, but when they do there’s never a witch hunt, we just get back in the game. It was a big deal to beat Hooligan, we have the greatest respect for them as competitors – they are not an easy nut to crack.

“After consistent sea breezes for the first two days, today was really flakey, nine knots at the top of the rig and five on the water; nothing was dead certain,” Maguire added.

Geoff Boettcher’s TP52, Secret Mens Business, had its moment of glory in Race 7. They led the others to the top mark by taking the left-hand side of the track off Brighton Beach. The South Australians went one better by winning Race 8 outright, which put them within a point of equaling second overall.

“It was an excellent series but it was hard work, especially the long race as I had a hip operation six weeks prior,” Boettcher said.

“Mentally, the aim was to have surgery then recover to be at the champs – I knew the boys wanted to be here. The last couple of races were excellent – four boats within cooee of each other.”

Clear IRC Division 2 winner, Ray Roberts’ Botin 40, Team Hollywood, staged a near clean-sweep of the championship. Bruce McCraken’s Ikon finally beat the red-shirts in the final race as Melbourne sweltered in 40 plus degrees on Thursday January 24, 2019, but it didn’t make a dent as the single second place became Hollywood’s dropped score.

“We had fantastic racing with the two Beneteau 45s, and on many occasions there were only seconds between us on time,” Roberts said.

“Division 2 was excellent; the starts were aggressively fought, and we had to use our best tactics. We were very impressed with the race committee and how they structured the courses. Kevin (Wilson) and his team did a very professional job on the racetrack.”

Next for Roberts is trying to win the Asian Yachting Champion title racing his JV TP52, also called Team Hollywood, at two key regattas in Asia in May.

Tasmanian IRC Division 3 winner, Shaun Tiedemann, is proud of his young Sydney 36cr crew from Hobart (their average age is 23) were able to defend their 2018 crown.

“They are all ex-Cadet sailors, including my son Sam, and they’ve come back to keelboat sailing on Philosopher, which is important for the sport. I get to sail with my son and he gets to sail with his mates.”

Defending OMR champion Craig Unthank, skipper of the Farrier F22, SKnot from Hastings Yacht Club, says it’s their first time finishing with a perfect scoresheet. “We had a good crew and good racing and it was a really well organised event,” Unthank praised.

The sport’s national body, Australian Sailing, thanks principal race officer Kevin Wilson and staff and volunteers from RMYS for staging a successful championship.

The Championship baton now goes to the Royal Yacht Club of Tasmania and the dates for the 2020 Australian Yachting Championship have been confirmed for January 3-5, immediately following the 75th Rolex Sydney Hobart Yacht Race.

Many in the championship fleet have a day to recover before lining up on Saturday morning at the top of the bay for the Festival of Sails’ opening Melbourne to Geelong Passage Race, the start of three days of racing out of the Royal Geelong Yacht Club over the Australia Day long weekend.