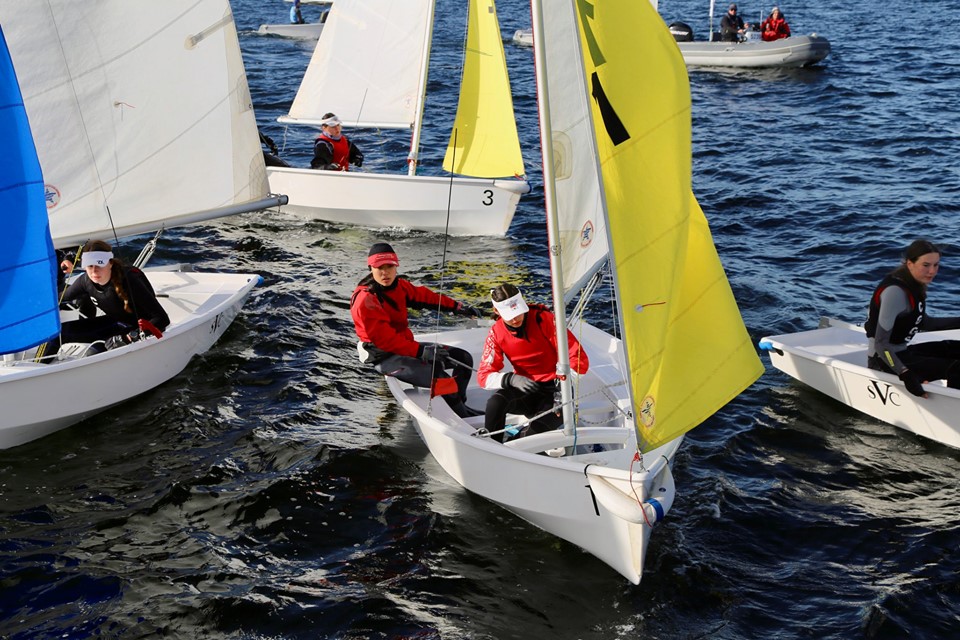 Sydney’s Scots 1 team has been named winners of the Australian Secondary Schools Team Racing Championship after a windless end to competition on Monday, followed by late-night hearings by the regatta Jury.

Two Hobart school teams, Hutchins Gold and Friends Blue, were placed second and third overall by the Jury, with South Australia’s Westminster College fourth out of the 24 teams from throughout Australia.

In the all-female competition, another NSW school, Ascham, defeated Hobart’s Fahan 2-1 in a closely fought final on Hobart’s River Derwent on Monday.

Race officer Nick Hutton today explained that, despite the inconsistent breeze on the Derwent, the race committee had completed round 18 of qualifying races. At the end of Round 17, Friends' Blue was on 15 wins and Scots 1 was on 14 wins. In round 18 Scots 1 beat Friends' Blue.

“When the breeze came in mid-afternoon we ran the last race in Round 18, validating all the other results in that round. That left Scots 1 and Friends' Blue on 15 wins with Scots 1 going ahead on the tie-breaker,” Hutton said

“From the Race Committee side, we simply ran out of time to complete two x best of three Open semi-finals and a best of five Open final/best of three Petite final between the breeze reappearing and 16:00 after which we could not start a new stage of the finals.

“So we ran the two semis and got a clear result but the last one finished at 15:58, so there was not time to start a finals series. Had we started it we would have had enough breeze to finish it but sadly 16:00 arrived before we got going.

“Had we had no finals at all, the result at the end of the 18-round qualifying series would have stood. However, we had enough wind to start the finals with a reasonable prospect of completing Open semi-finals and Final/Petite Final, and Girls' Final.

“Of course the breeze did not hold and we continued to have short but telling delays and course changes until, as noted above, we ran out of time.

“We ran the best of three Girls' final at the same time as the Open semi-finals and got a 2-1 result there in favour of Ascham over Fahan.

“Scots 1 won their Semi-Final 2-0 over Westminster and Hutchins Gold, who had finished the qualifying stage in 4th, beat Friends' Blue in their semi 2-1.

“The final outcome after the redress hearings was that Scots 1 was first, Hutchins Gold was second – these were the two Semi-Final winners – with Friends' Blue in third and Westminster finishing in fourth,” Hutton added.

Summarising the Jury’s findings, Chairman Murray Jones said the Jury had determined that the Sailing Instructions for the regatta did not provide adequate guidance on what should happen when only one stage of the finals format could be completed, although it was clear that the intent was that each completed stage would still enable results to be declared without necessarily reverting to the results from the preliminary series.

Appendix D4.7 of the Racing Rules of Sailing was then applied to determine the final four placings. Appendix D4.7 reads:

'D4.7 Incomplete Knock-Out Stage
If a match in a knock-out stage is not completed (including 0-0), the result of the match shall be determined using, in order,
(a) the higher number of race wins in the incomplete match;
(b) the higher number of race wins in all races in the event between the tied teams;
(c) the higher place in the most recent stage, applying rule D4.4(a) if necessary;
(d) the winner of the most recent race between the teams.

If this rule fails to determine a result, the stage shall be tied, unless the sailing instructions provide for some other result.'

Chairman Jones explained that the tie-break between the two semi-final winners (Scots and Hutchins) was able to be resolved at step (b). The break between the two semi-final losers (Friends and Westminster) was complicated by the unusual scenario of them never having sailed against each other in the preliminary series, so it was resolved by step (c).