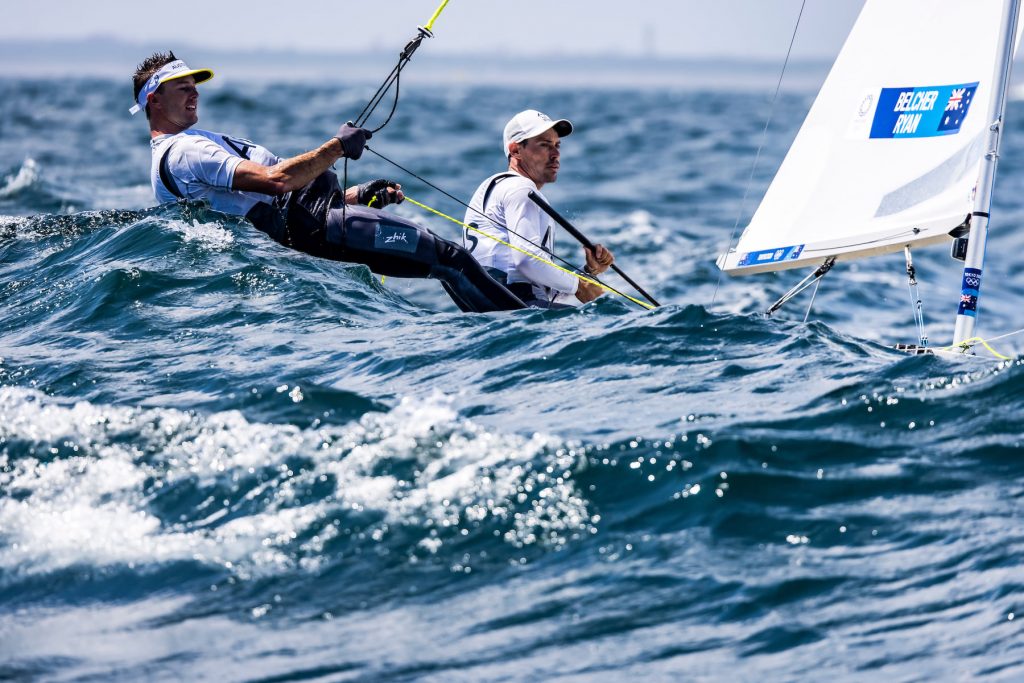 470 sailors Mat Belcher and Will Ryan are currently leading overall after one day of racing. Pic - Sailing Energy 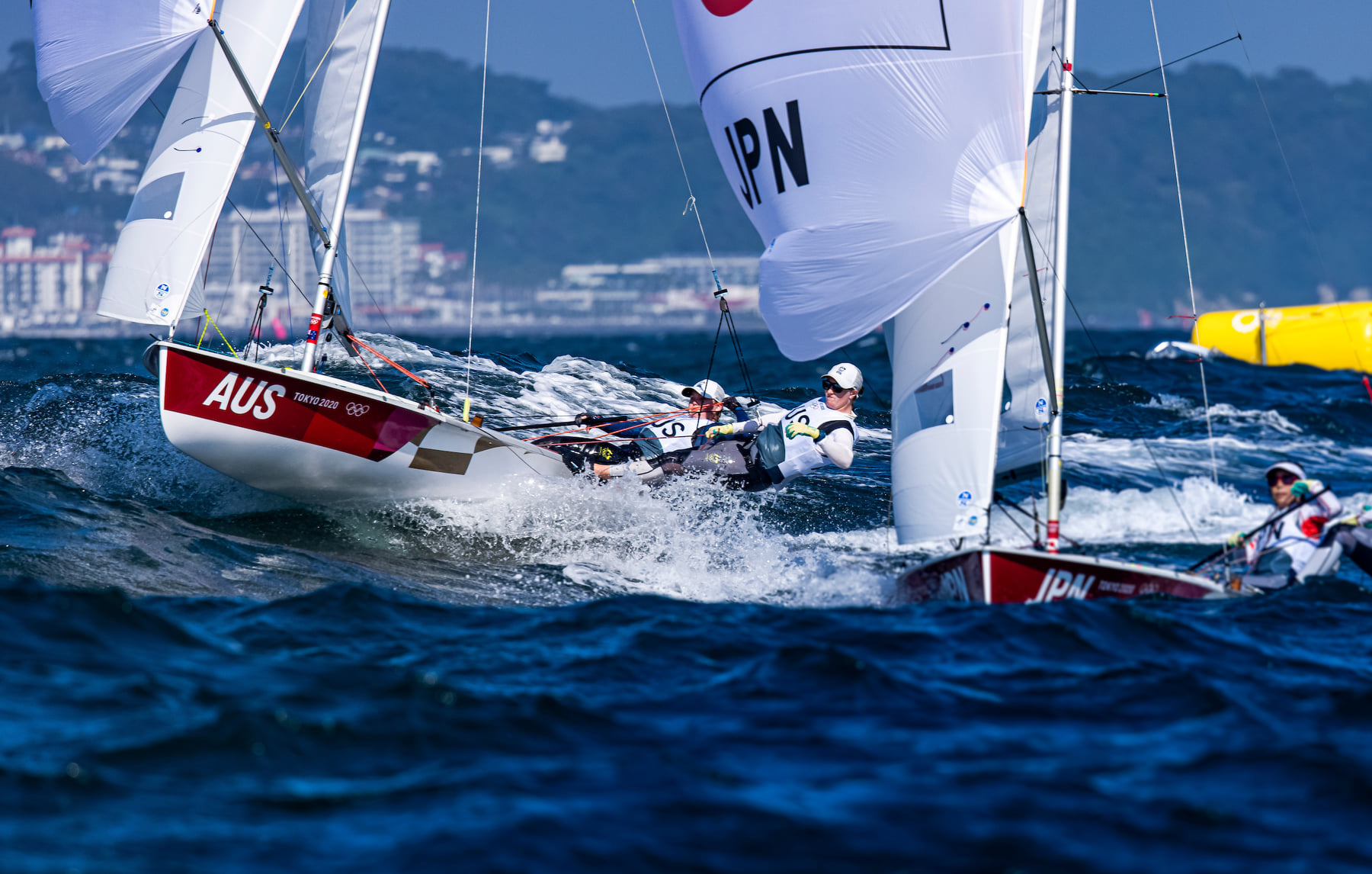 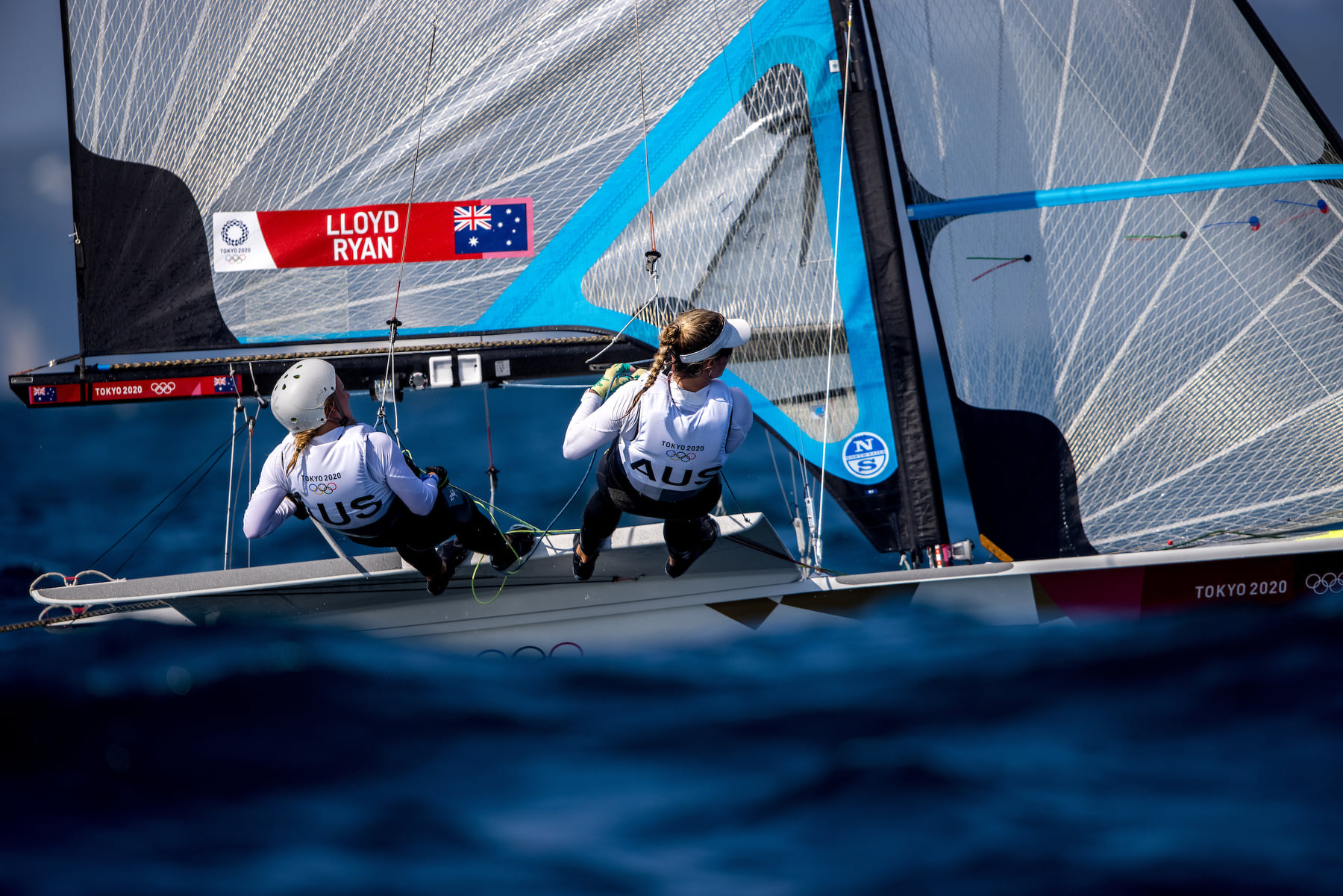 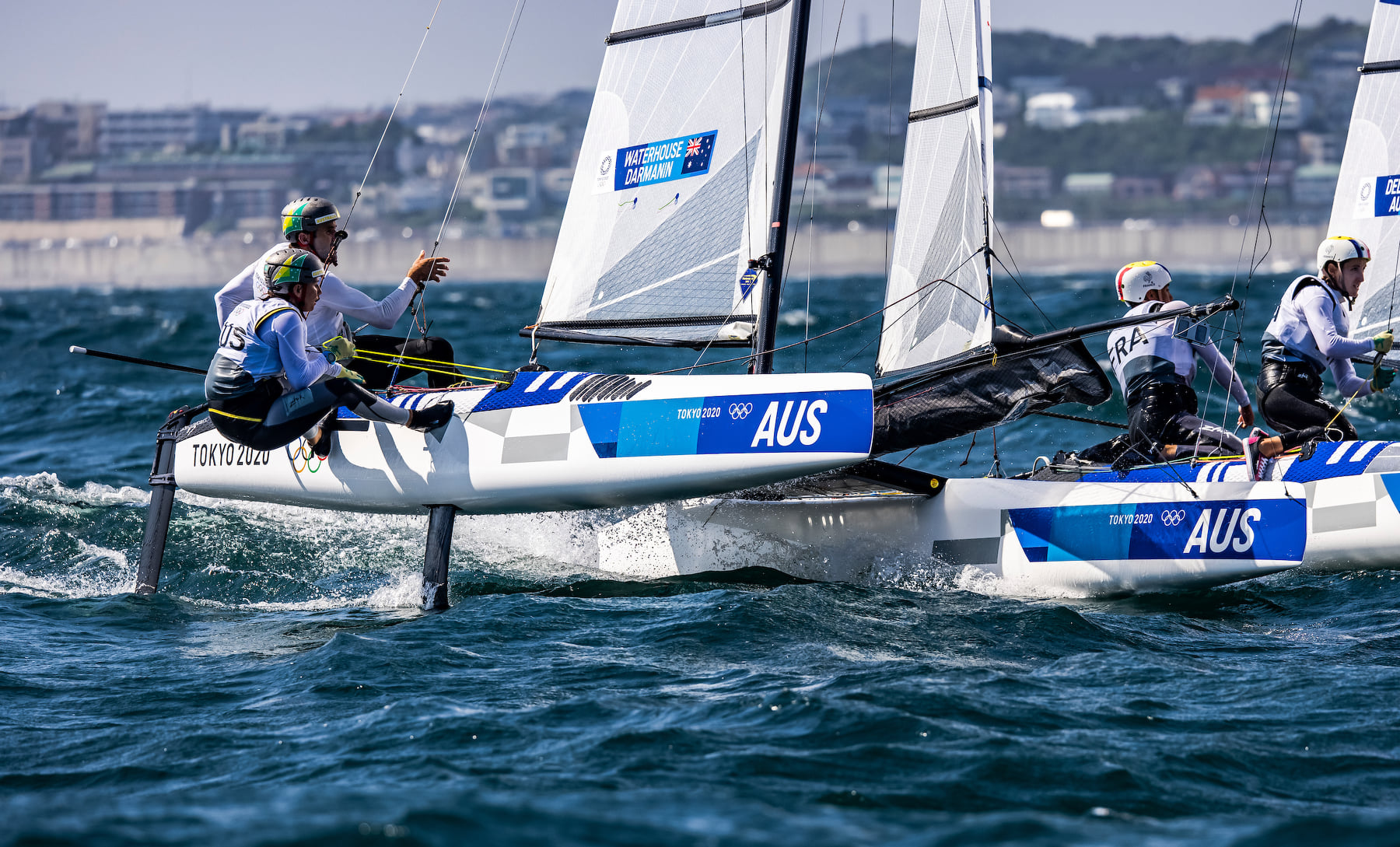 After an impressive first day on the water, Jason Waterhouse and Lisa Darmanin are on track to come away with a podium finish in the Nacra 17. Pic - Sailing Energy 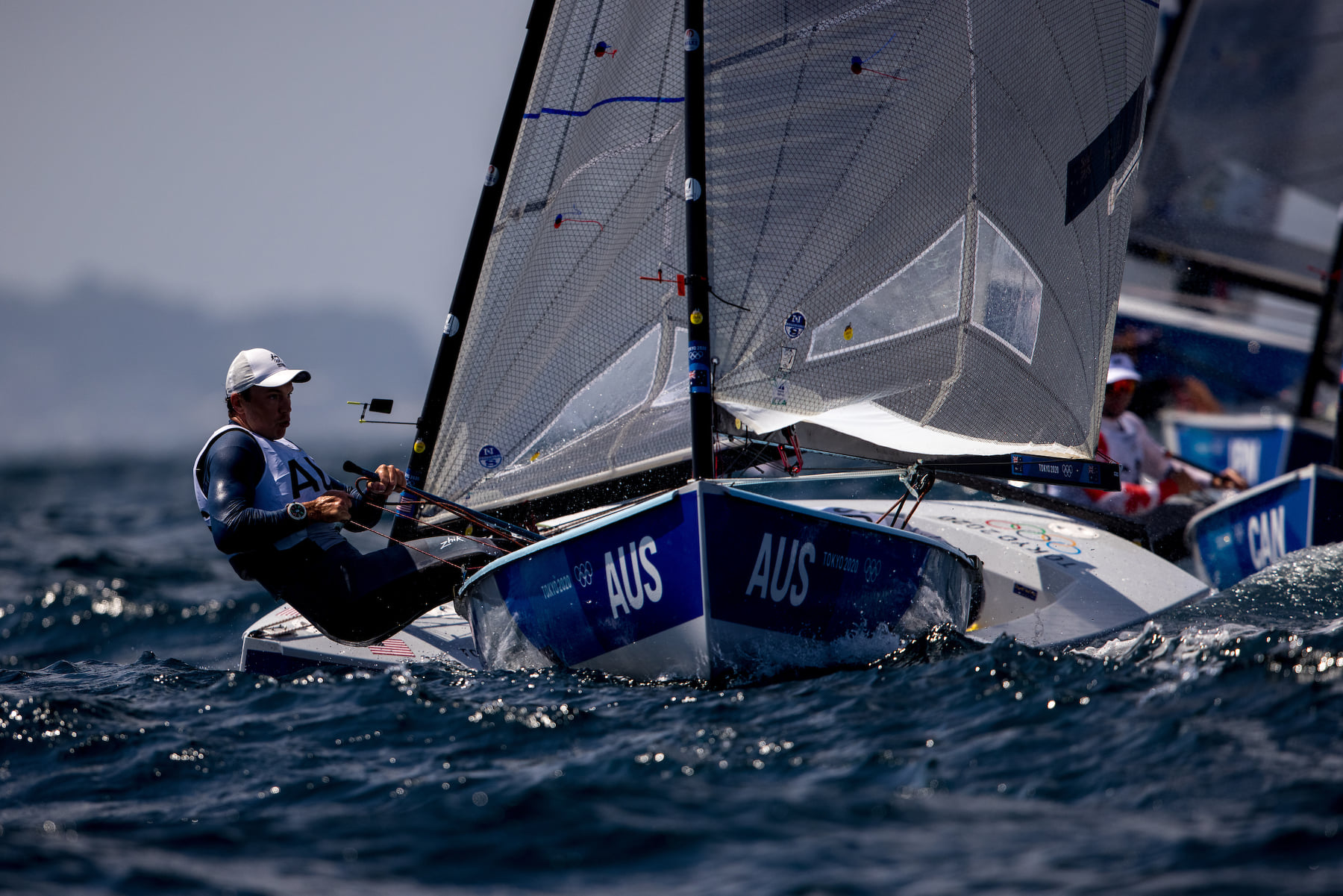 Jake Lilley is hoping to improve on his ninth overall in the Finn class. Pic - Sailing Energy 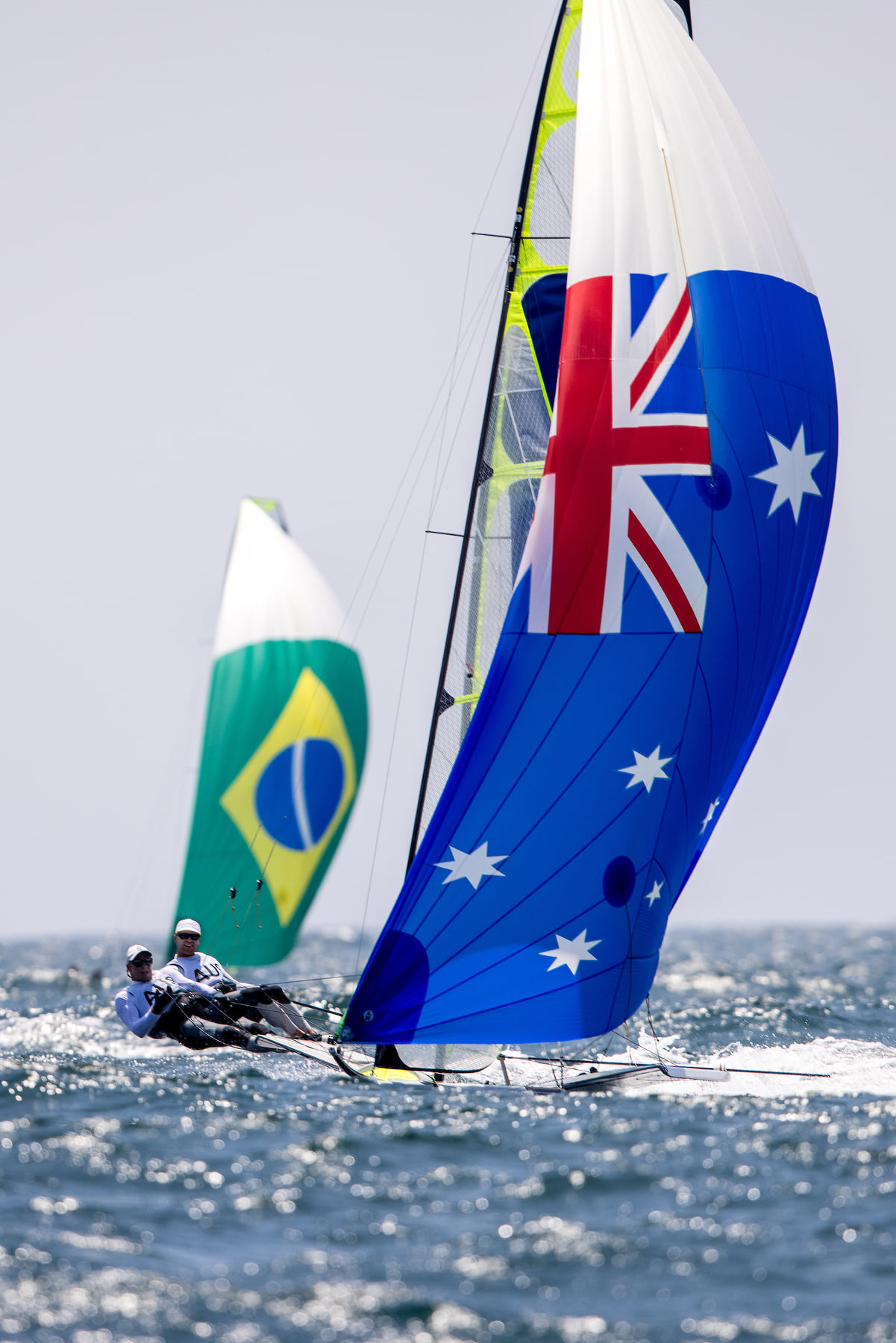 Brothers Will and Sam Phillips are placed third overall in the 49er fleet, after coming away with a win in the third race. Pic - Sailing Energy 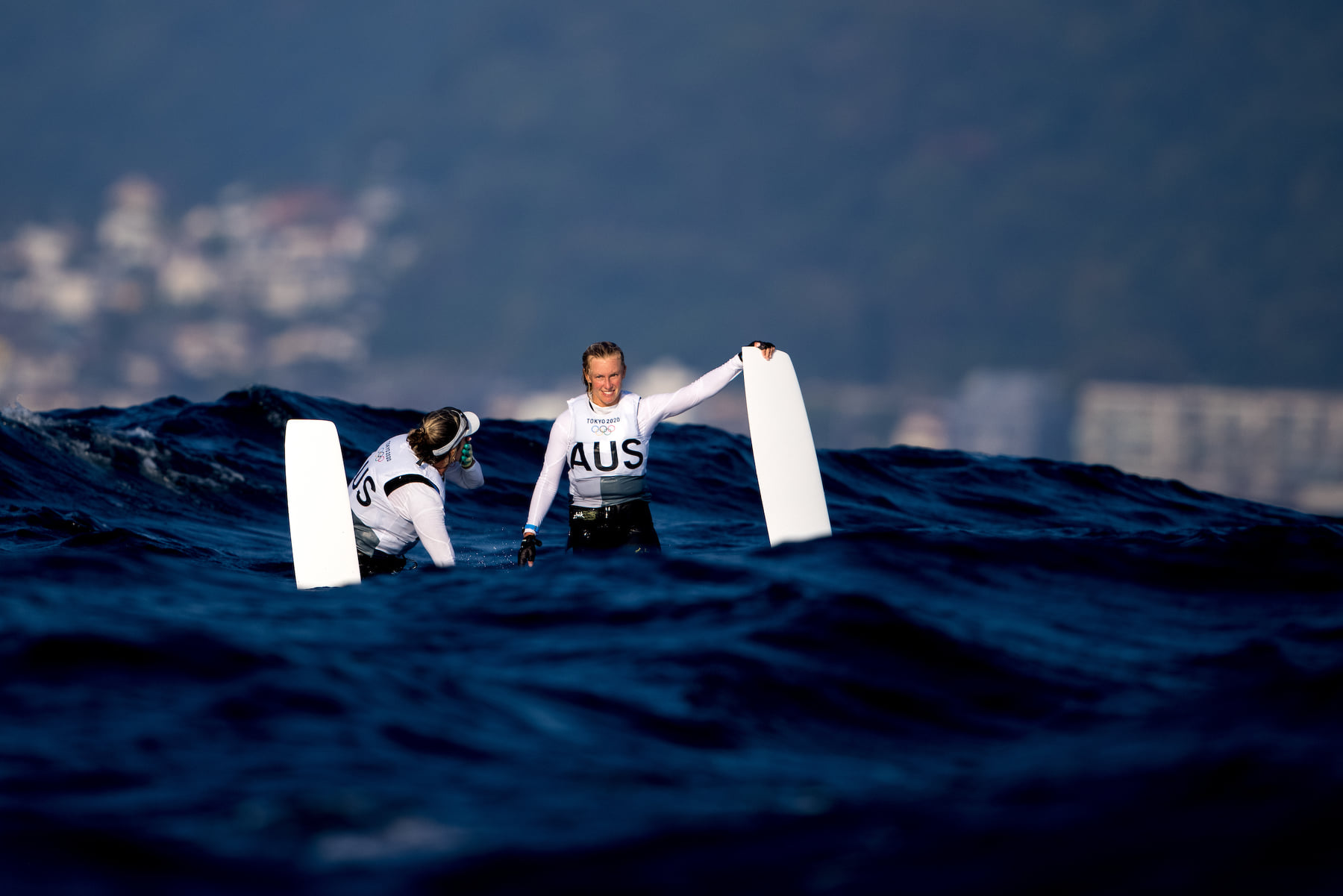 49erFX sailors Tess Lloyd and Jaime Ryan cooled off after a long day of racing at Enoshima. Pic - Sailing Energy

Australia had six classes in action at the Tokyo 2020 Olympics today, hear from them below.

The Men’s 470 is expected to be one of the most closely fought classes in Tokyo, with seasoned campaigners Mat Belcher and Will Ryan right among the favourites. They put together a solid first day in their attempt to go one better than the silver they won together five years ago at Rio 2016.

“There’s an old saying that you can’t win the event on the first day, but you can certainly lose it,” said Belcher, echoing Team Leader Iain Murray’s words from yesterday. “It was tricky because being the first day there were a lot of nerves and everyone was a bit erratic. The goal was to get two good scores on the board and get into a rhythm as early as possible.”

It has been a long journey for the pair, they were in fine form leading in to last year’s Games before the postponement threw their plans into disarray.

“Just relieved to have it started,” said Ryan when asked how he felt this afternoon. “It’s been something that Mat and I have been working towards now for five years together, and every day you’re doing something for it or thinking about it. You don’t escape it. So it’s nice to finally be here on the starting line, doing what we like to do in great conditions.”

Nia Jerwood and Monique de Vries made their Olympic debut today in conditions not unfamiliar to the Fremantle Sailing Club pair. “I don’t think we could have asked for better conditions for our first day,” said de Vries. “We tend to like the stronger winds, I think it’s a fairly well-known fact.”

There was a lot to take in on the first day of competition, but the team got away well before fading in their second race. “It was an exciting day,” continued de Vries. “We had plenty of breeze and had a good first race. We made a few little mistakes here and there (in the second race), but overall we managed to have two solid races today and we just need to keep converting on that.”

Their thoughts on their first day out on the Olympic race course?

“There was a good wind and big waves so not much more we could ask for.”

Before racing today Team Leader Iain Murray noted that “The Phillips boys will be looking at the weather forecast today and rubbing their hands.” How right he was. The brothers had themselves a day out on Sagami Bay and sit third overall almost halfway through their schedule.

“Pretty happy,” were the words used by Will to sum up their day. “We were offshore a long way which was beautiful because the waves were a bit larger and wider out there, it wasn’t quite as choppy so that was good for the 49er.”

It was a long day for the 49ers, but now they have found their rhythm the Phillips’ are keen to keep things rolling. “I’m absolutely buggered,” finished Will. “I’m going to have an ice bath, get some lunch and come back to do it all again tomorrow.”

It was another long, hot day out on the water for Australia’s 49erFX team of Tess Lloyd and Jaime Ryan today. The pair posted a set of keepers as they maintained contact with the top half of the fleet at the half way point of the competition.

“Today was one of those full on Enoshima days that we have all been hanging out for,” said Ryan after racing. “We were on one of the outside courses so we had some good waves out there. At this point we feel like we are sailing nice and consistent.”

The duo ended up in the drink after the conclusion of their last race, something they were not too unhappy about. “We crossed the line and looked at each other for one second to say ‘good job’ and we lost concentration and put the bow in and had a nice little swim,” explained Ryan. “To be honest I think we were both pretty wrecked so we were happy to take a breather for a second.”

Experience counts at an Olympic Games, and Rio 2016 veterans Jason Waterhouse and Lisa Darmanin used all of it and more to sneak home ahead of old rivals Argentina for 4th place in an exciting finish to the final Nacra 17 race today.

“We knew there was a massive right shift coming and everyone overlayed the first lap so we wanted to make sure we were ready to take advantage of people to do the same,” said skipper Waterhouse about that blistering last beat. “That just shows what the Olympic Games does. Everyone knew the breeze had gone right and everyone gybed late so were really stoked to squeeze home in that finish.”

The cousins from Sydney’s Northern Beaches are happy enough sitting third at the close of today’s racing, but know there is plenty more racing to come.

“The second race was a bit of a bummer being back in the fleet,” continued Darmanin. “But It was just great to be racing again after not having raced in a long time. We were happy with our starts, we are doing most things right and hopefully we can do more things right tomorrow.”

Today was another day of “snakes and ladders” in Finn sailor Jake Lilley’s pursuit of perfection. The Royal Queensland Yacht Squadron sailor posted a strong first race, but couldn’t quite back it up as a small slip led to an 11th-place finish in his second race.

“There was a nice breeze and I managed to use my speed and put a good one together,” said Lilley in reference to his first race. “But it was just another one down, one step closer and a step in the right direction with a long way to go.”

In reference to his second race he continued “I think we had pretty good speed and I was sailing pretty well, but I just had one bad moment which just set me back a bit. I will be trying to make up for that the rest of this week.”