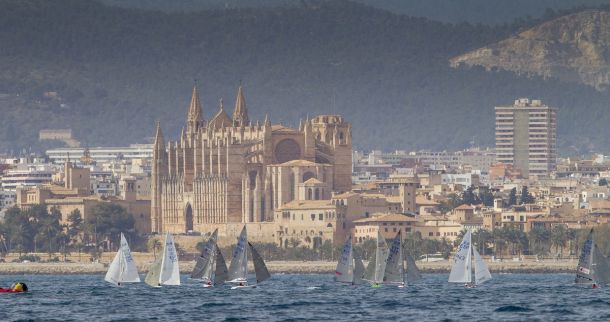 The Princes Sofia Regatta IBEROSTAR in Palma de Mallorca, Spain (30 March to 4 April 2015) marks the start of the European season and kicks-off racing in the Northern Hemisphere for the Australian Sailing Team. Over 1200 sailors from 65 nations will compete in the 46th edition of this international regatta, which has become a regular feature on the international regatta calendar. Racing starts in Spain today, Monday 30th March and runs for six days with the medals set to be decided on 4th April (evening AEST).

Three Australian Nacra 17 crews are competing for one Olympic selection spot this season and all three will race in Palma as a warm-up to the World Cup in Hyères. AST cousins Lisa Darmanin (NSW) and Jason Waterhouse (NSW) finished 2014 as the most successful Australian crew after they won bronze at the 2014 ISAF Sailing World Championships in Santander in September and were the first Nacra 17 pair to qualify for the Abu Dhabi ISAF Sailing World Cup Final when they took the Melbourne title in December.

“It's great to be back in Europe despite the cold conditions, Jason and I are really excited to get back on the race track to give us a benchmark of where we are at leading into the final Olympic year” Lisa Darmanin said on the final day of training in Palma.

“Training has been going great for Team Nacra here in Palma. We have had pretty tough training conditions but overall have had some really productive on water sessions. Racing in Palma is very challenging so it will be a good indicator of how we are all tracking. The Nacra 17 still being a relatively new class, the way people are sailing the boats changes all the time. We've been working extremely hard over the Australian summer so it will be interesting to see what the rest of the world has been up to.”

In addition to the two events with AST representation, Australian Sailing Squad (ASS) athletes will race in seven of the ten Olympic events. The remainder of the team is to arrive in Europe over the next of couple weeks.

For most athletes the Trofeo Princesa Regatta Palma de Mallorca will be a warm-up event for the upcoming ISAF Sailing World Cup in Hyeres. The event also offers the opportunity to those who have not yet qualified for the ISAF Sailing World Cup in Hyères, France (20-26 April 2015) to secure their World Cup spot. This includes Australian Sailing Squad’s new 49er combination of Will Phillips (VIC) and James Wierzbowski as well as Women’s 470 crew of Carrie Smith (WA) and Jaime Ryan (QLD). To qualify for Hyères, they will need to finish in the top ten boats not already qualified by ranking in the top 30.

The Trofeo Princess Sofia regatta will be followed by the ISAF Sailing World Cup Hyères soon after (20-26 April). The third ISAF Sailing World Cup of the 2015 series will be the first major benchmark event and will see all Australian Sailing Team and Squad Olympic contenders compete in France. The ISAF Sailing World Cup in Weymouth (8-14 June), the London 2012 venue, follows the Medemblik Delta Lloyd qualifying regatta in May. Several European and World Championship Regattas in the individual classes fill up a busy competition calendar for Australian Sailing up to the Rio Test event to be held at Marina de Gloria from August 12-22.