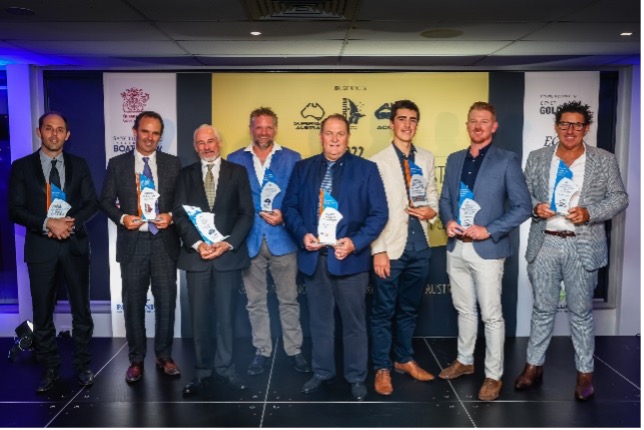 The 2022 Australian Marine Industry Awards were held on Wednesday, recognising and awarding outstanding achievers across the three industry sectors, held at a Gala Dinner at Southport Yacht Club.

Commencing with pre-dinner drinks and canapes sponsored by Benetti Yachts on the Club’s recently opened Megayacht berth, followed by dinner in the Compass Room for 200 guests, the presentations honoured winners across eight competitive categories.

There were two awards in the Commercial Category. The first, ‘The 2022 Commercial Marine Project/Design or Manufacturer of the Year’ was presented by Sydney City Marine to Spear Green Design for its impressive work on two new vessels that will service the Isles of Scilly and for designing the marine interior of a fleet of 12 new vessels to service Windfarms in south eastern Asia and Europe.

The award was accepted by Jeremy Spear, Director of Spear Green Design and presented by Brenton Fischer of Sydney City Marine.

‘The 2022 Commercial Marine Service Provider of the Year’, presented by Volvo Penta, was won by The Yard Brisbane. Judges were impressed by the facility’s ability to support myriad commercial clients, enabling them to deliver and maintain a high-quality service to the Australian transportation, logistics and marine industry, in Queensland and nationally.

In the Superyacht segment, the most hotly contested category of the night was ‘The Superyacht Industry Service Provider of the Year Award’ presented by Bank of Queensland – Business. The Boat Works was selected by judges for its impressive expansion over 2021, designing and marketing as a resort for boats. Nav Bajwa, Senior, Client Acquisition Manager Foreign Exchange & Trade Finance, Bank of Queensland – Business proudly presented this award to Shane Subichin, General Manager for their outstanding Gold Coast facility.

“The Service Award is a tribute to teamwork, owners, managers, staff and the vision of Tony Longhurst and his investment in the dedicated Superyacht facility,” said Shane Subichin, General Manager.

The Boat Works was also successful in winning ‘The 2022 Superyacht Industry Project/Design or Manufacturer of the Year Award’, presented by Echo Yachts.

The outstanding submission detailed a significant project that involved installation of an upgraded stabilizer system on a 30m charter yacht, requiring a complex reinforcement of the vessel’s hull – the second time only that such a project has been undertaken in Australia. Chris Blackwell, Sales & Marketing Manager of Echo Yachts presented the award once again to Shane Subichin, General Manager.

Charmaine Webb, Marketing Manager, The Boat Works said, “The Project Award is a nod to our ethos of collaboration with a positive approach, skilled people and a passion for this industry that are characteristic of every project undertaken at The Boat Works to ensure the customer gets the best experience every time.’’

‘The 2022 Australian Exporter of the Year’ award presented by The Whiskey Project Group went to Fliteboard and reflects an extraordinary success story which has seen an increase of 126 per cent in export sales and export revenue growth from January – December 2021 compared to the previous year representing more than a doubling of export business performance to AUD $38.6 million.

This award was received by David Trewern, founder of Bryon Bay-based company and was presented by Ryan Carmichael Chief Operating Officer, The Whiskey Project Group.

Notably, the company held the first-ever ‘Flite Cup’ showcasing the performance side of the innovative product and hosted a community fundraiser that raised $50,000 for two indigenous-led organizations while also making history, being the first-ever eFoil to cross the English Channel.

‘The 2022 Apprentice of the Year Award’ presented by TAFE Queensland rewards the winner with a return trip to the world’s largest marine equipment trade show, METSTRADE in Amsterdam. This year’s proud recipient was Blake Frazer from Onboard Engineering.

Blake started as a marina attendant at the Royal Motor Yacht Club Port Hacking, progressing to work experience at Onboard Engineering which led to an apprenticeship. He is currently a third year Mobile Plant Mechanic. Additionally, Blake works as a casual deckhand on the superyacht Royal X. Blake Frazer received his award from Simon Hislop, Director Business Development from TAFE Queensland and last year’s Apprentice of the Year, Robert Smith from Superior Jetties.

Damian Mercieca, Director, Onboard Engineering said, “Blake’s problem-solving abilities, enthusiasm and passion for the industry is well recognised within the business, winning the company’s monthly employee award on several occasions. His work ethic and ability coupled with his passion for his culture and community will ensure his success and we wish him all the best for his future.”

The final award of the night, ‘The 2022 Marine Industry Champion’ was presented by Rivergate Marina & Shipyard to Wes Moxey from Riviera. Wes Moxey began his career in the marine industry as an apprentice shipwright for Carrington Slipways in the late 1970s. Wes then joined Riviera in 1982 as a shipwright, just two years after the company was founded. His career quickly progressed, leading him to become CEO of Riviera in 1998.

Wes established Riviera’s award-winning apprenticeship program, with Riviera currently training 107 apprentices on-site as the company works to meet global demand for its world-class motor yachts. Over many years, Wes has become a champion of the industry by learning from the best and now he imparts that knowledge freely to benefit the wider industry. Wes accepted this award from Steve Fisher, Director of international Business, Rivergate Marina and Shipyard.