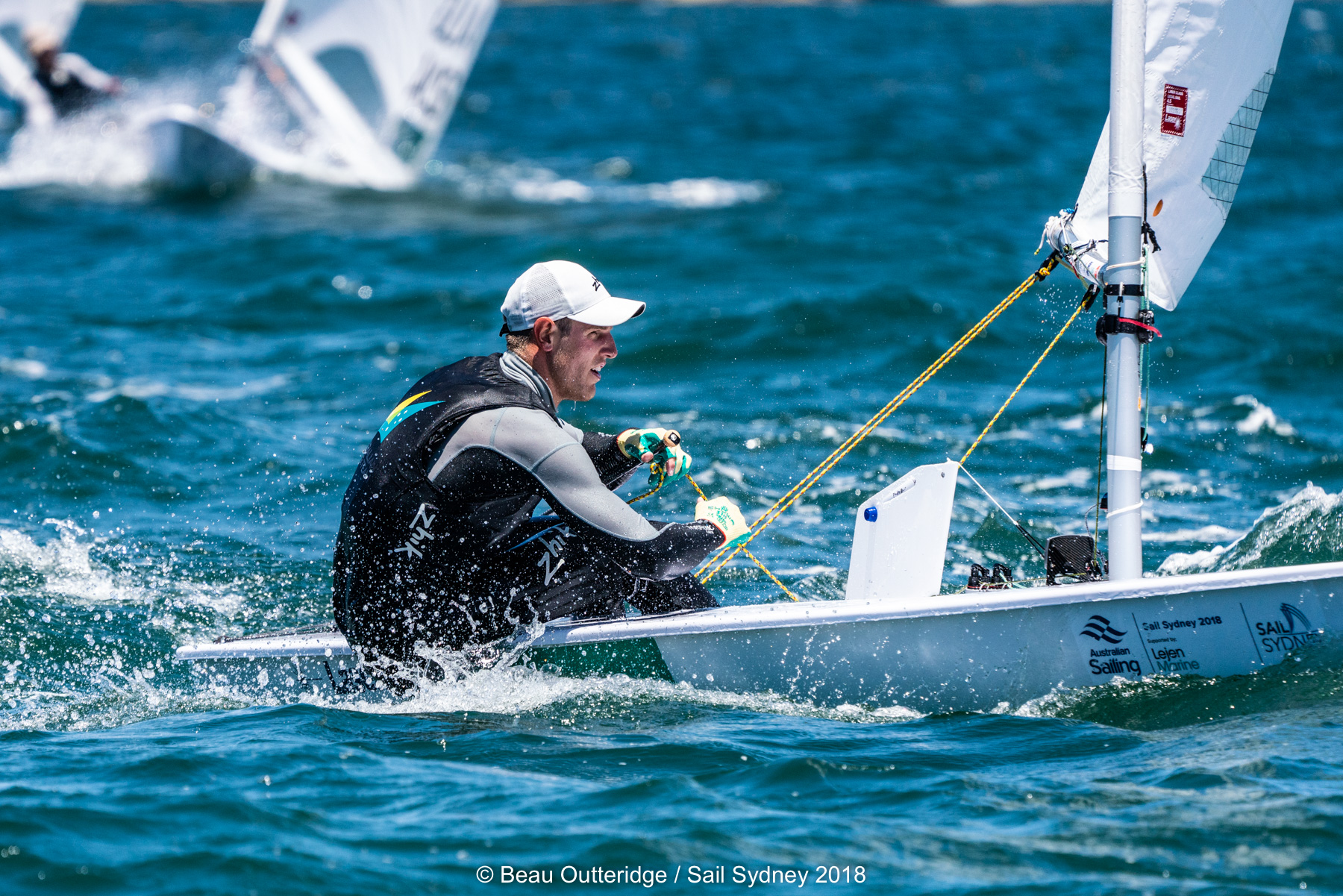 There may be some early celebrations in the Italian city of Civitavecchia tonight after their local duo won all three of the races in the men’s RS:X on the second day of the 51st Semaine Olympique Française in Hyères.

Daniele Benedetti followed the magnificent first day of his compatriot, Mattia Camboni, by winning the first two races comfortably before Camboni won the third to open up an already significant gap as the overall leader.

“Yes, just one city won today, “Camboni said. “I'm always competing with him (Benedetti). We're always together; we live in the same city and the same building close to Rome on the sea in Civitavecchia.”

Almost perfect stable racing conditions graced the second day and the big names made it count. If Monday was about staying calm while waiting for the wind, Tuesday was about knowing how to capitalise.

The forecast filled in overnight and the sailors were greeted with easterlies of up to 12 knots as the morning wore into lunchtime.

RS:X Men
Poland's Piotr Myszka, fourth at 2016 Rio Olympics, splits the Italians at top of the leaderboard, but Camboni has no significant discard yet after not finishing out of the top three in six races. He leads by 17 points already.

Camboni pushed increasingly hard at the starts and it paid out in the third race.
“In the second and third starts I risked a lot,” Camboni said, “I pushed and I was afraid about UFD (being disqualified for being over the line). Daniele and I always started in different places, but found our way back together.

“He had better starts than me in the first and second. In the last race I managed to control Bing Ye, the 2017 world champion, who's very fast, but I think he had a lot of mistakes – too many tacks at the wrong moment.

“They all have a discard and I haven't yet, but anything can happen, we'll see, I'm trying to be consistent. I felt really fast again as soon as I went out, I had a really good feeling with the equipment. I'll go home, a massage and maybe some good pasta.”

RS:X Women
In what could almost be an Olympic fleet, Charline Picon, France's 2016 Olympic Champion, took the overall lead with a second consistent day, winning the first race and following it with two fourths.

But with so much racing to come Picon knows that China's Peina Chen and Yunxiu Lu, who won the second race, are lying just behind her and will push her all week.

“It will be a long week because we have 15 rounds scheduled with only one discard, so you cannot take anything for granted,” Picon said.” Every day, we start again from scratch.”

“It was a good battle on the water with the Chinese and some British, Israel and Marta, the Italian. The first two races I had good starts and they were quite close. The second race was planing conditions and some girls, like the Chinese and Poland 7 (Maja Dziarnowska, who finished second), took a good option and got a good lead to the first mark and then after that led the race.

“It wasn't so easy for the last race of the day because there was a big shift on the last upwind. I was first with a big lead and I was on the left with all the girls but some of them got a better lane and I lost three places. But I'm happy with my day.”

Even more experienced, Paige Railey, America's 2005 world champion and 2006 World Sailor of the Year, continued to bounce back strongly after a UFD (disqualification for being over the start line early) in the first race yesterday. She won the second race and finished third and seventh today to move into third overall.

But the overnight leader, Hungary's young hope, Maria Erdi, showed her mettle, finishing fifth in the second race (after an eleventh in the first) to stay second overall.

“I had a good day, my speed was good,” Tenkanen said. “We had more or less easterlies today which meant we had some nice waves too, with medium wind. Yesterday was quite challenging, of course my first race (17th) could have gone better but the most important thing was not to have a disaster.

“The first upwind was quite tight and I was second at the upwind mark – my teammate Monika (Mikkola) was leading – and then Paige. I think I was first at the downwind mark.”

Such was Tuula's focus that she could not remember who finished second to her in the first race and laughs (and feels a little bad) when her coach reminds her it was her flatmate Falasca.

“In the second race, I'm not sure where Emma (Plasschaert) started but she was able to go more to the left, so she was leading at the upwind mark and then after the downwind we had quite a big separation with the rest,” Tenkanen said.” She was leading most of the race and I passed her just before the gate.”

Emma Plasschaert, Belgium's first ever Laser Radial world champion in 2018, had another split day with a 26th place in the first race as she works on new technique for her starts. She led all the way in the second before Tuula passed her.

Plasschaert remained philosophical afterwards and said she is focusing on the bigger picture with this the last regatta where she feels she can experiment.

“This is my last chance to learn and make the mistakes,” she said. “This year we've started training with a new coach, Mark Littlejohn, and a lot of new information has been brought up and I'm learning.

“I'm still trying out new things and I think now is really the moment to do that because in the year leading up to the Games then it becomes harder and then you really want to perform to keep your confidence level high.

“I'm struggling a bit with my starts, so the first race I got spat out – I keep pulling the trigger at the wrong point – and we couldn't keep to our plan. We've been working on some new things and it's time to start incorporating everything so it's a bit hit and miss.”

Laser
The Laser fleet was the last to finish, the only class affected by the wind dropping, with both fleets second races abandoned. That promises a big Wednesday as they will try to fit in three races tomorrow to catch up before splitting in to Gold and Silver fleets.

There were no significant changes in the leaderboard, with the four Australians still sitting behind the overnight leader, Sam Meech, New Zealand's bronze medallist in the Laser at the Rio 2016 Olympics.

But Meech, who won both his races on Monday, could only manage a ninth place and has a higher discard now than his pursuers. Britain's Nick Thompson, the 2015 and 2016 world champion, won that race and was frustrated in second as he was lying second when it was abandoned.

“The race we did there was nice breeze,” he said. “I always think in that direction (easterlies) there's a tendency for the fleet to want to protect the left. But then the wind was forecast to die off and swing round to the right so you had to keep an eye on that.

“So I started central, held out to the left-hand side. From there it was battle between the top four as to who was going to win the race.

“I was second or third around the leeward and then stepped up into the lead (ahead of the two Australians). I was a bit disappointed because the race that was abandoned I was second in that as well.”

But after a difficult Monday, Thompson moved into the top ten. He has not come to experiment, he has come to win.

“I certainly want to do well here. I always think Hyères is a brilliant regatta, it's always an important one for everyone, even though it's not now a World Cup (event), I don't think anyone minds, it's regarded very highly, it's generally good racing here, it's always close.”