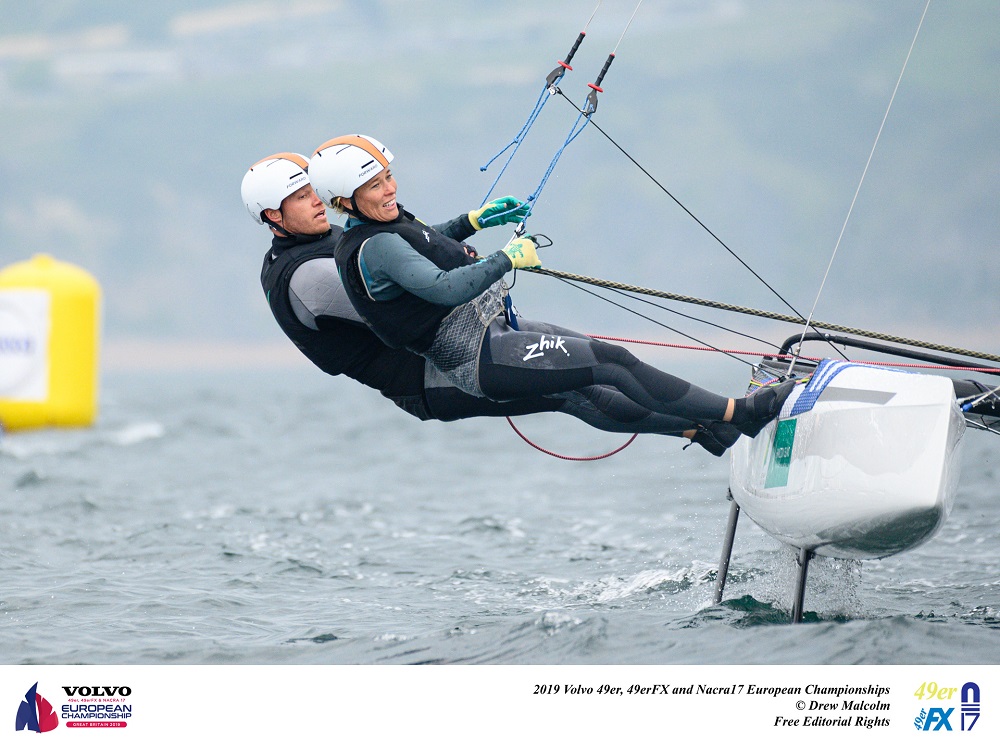 Two sets of siblings finished the best placed of the Australian Sailing Team (AST) competing at the 49er, 49erFX and Nacra 17 European Championships at Weymouth in the UK, which came to an end at 5.15pm Sunday evening local time with the cancellation of the 49er Medal Race.

Brothers Will and Sam Phillips did not get to fulfill their ambition of sailing in the 49er Medal Race, as the wind died completely, but they were the only Australians in the class to make it this far.

Officials tried, but were forced to send the AP flag up the mast and waited, but to no avail. This was hard on all in the class, who earlier in the day had sailed Race 20, in which the Victorian brothers finished 20th to place eighth overall.

Conditions on Portland Harbour when the 49ers went out for Race 20 were a portent of things to come. The race was scheduled for 10am, but a weak 4-5 knot south-westerly finally started the fleet at 11.30am.

The Phillips’ started near the boat end of the start line. Caught on the wrong side of the breeze, they ended in the back half of the fleet, rounding the windward mark for the first time in tricky light air.

At the first downwind mark, the Victorians were caught out by those coming into the mark on the opposite gybe, and trapped by others having rounded and coming straight at them. As a consequence, they could not recover and slipped back to finish 20th. If there was a prize, it was the experience of sailing on the hallowed waters of the London 2012 Olympic Sailing Competition.

Sam Phillips commented: “Obviously we’re pretty happy with how we’ve been sailing this week, but disappointed with how some things have gone, so we are looking to improve on those things.”

The Nacra 17s did have their Medal Race. It started shortly after 3.15pm local time in a shifty 6 knot west/nor-westerly, but was quickly abandoned because of a big shift. Officials waited as the shifts continued and the light breeze went up and down. Finally, the race started 47 minutes later.

Nathan and Haylee Outteridge were the only Australians in the Medal Race and started from 10th place overall and out of medal contention. The light shifty breeze meant there were big gaps between the 10 boats and positions were pretty much cemented from early in the race. The Australian brother and sister finished eighth, to end their competition in 10th overall.

Considering their relative newness to the class, and lack of competition and training time together due to some previous commitments Nathan had, they sailed very well, particularly in the lighter winds on flat water.

“Next year’s schedule looks much better time-wise. We’ll have a big run in to the Worlds in Auckland in December. The lead up there will be good for us. We have the 2020 Worlds two months later in Geelong. It’ll be good doing back-to-back Worlds and training for them, it will do wonders for our sailing,” Nathan said.

The Outteridge family as a whole is a close-knit one with strong ties to sailing. During the years Nathan was sailing 49ers at the elite level, he always made time to help Haylee with her 29er and other campaigns, often racing at the same venues. The Nacra is the first time since they were young kids that the 33 year-old has raced with his 28 year-old sister though.

“It’s a lot of fun, very rewarding for both of us,” Nathan commented. “Obviously I watched and helped Haylee where I could. She is a good sailor who has had inconsistencies in her campaigns. At the beginning of last year, we talked about doing an Olympic campaign together.

“We decided to give it a go and went in with no expectations. We got smacked back to reality pretty quickly with the Nacra. It has been a reality check. Most our Olympic selection and trials start later this year and we’ll have to do a lot of training and preparation,” he admitted.

Other big brothers take note: Nathan states, “It’s awesome to sail with Haylee. She puts in a lot of effort with her training and fitness.”

He will leave Weymouth now and head back to his SailGP commitments before he and Haylee get together again for some serious Nacra training.

He said “I’m sure Nathan (Outteridge), an Olympic 49er gold and silver medallist, isn’t happy, but I’m sure he is already looking at the things he has to work on. He hasn’t had that much time in the boat and I don’t think it will take long for him to work it out when he does. When he puts his mind to something, he usually achieves it.

“The 49ers are interesting. Burling and Tuke, Fletcher and Bithel, the top five teams, they are good at it all the time; you expect to see them there. Then there’s next batch with the Gilmours and Phillips’ who get high scores here and there. They need to work on being consistent,” Murray said.

“The 49erFX, girls are chipping away, but the need to get consistency is an agenda item for them too. You have to be 90 percent on your game all the time, that’s what the 49er and 49erFX teams have to work on,” he ended.

In Weymouth, the Australians faced the world’s best as they campaigned towards selection to the 2020 Tokyo Olympic Games.