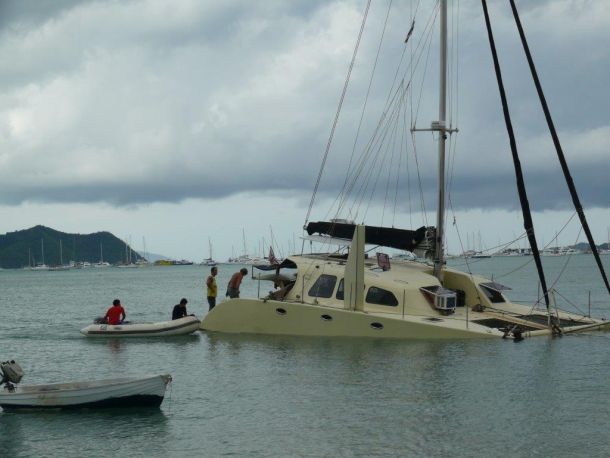 Bob Mott, who runs Charter Catamaran in Thailand has sent us photographs of a cruising catamaran that has been severely holed after a collision with an unchartered reef near Phuket.

Bob reports that the owner, Andre, is a French Canadian aged 76 who is in hospital with rib/kidney damage after the incident. Sadly, his 68-year-old wife Hazel is dying of cancer and is confined to a wheel chair. Hazel does the navigation and due to her condition she sleeps up top in the saloon. Andre does all the sailing side.

The boat's name is Sans Tambour Ni Trompete which means Quiet Achiever – the literal translation from French to English is Without Fanfare.

Andre told Bob Mott that they left anchorage and were calibrating their repaired Coursemaster autopilot, which involved doing circles to orientate the fluxgate. That soaked up around 30 minutes. They were then heading on a line out of the bay towards the Yacht Haven Marina channel on their way to collect friends. They had been underway at around 4-5 knots under outboards for about 1 ½ hours, maybe a bit less, before they struck. They were motoring not sailing. Bob says, “We haven’t established the location of the rocks as of yet and at some point I will catch up with him and try to at least get a general area to warn about.”

Weather at the time of collision was 12-14 knots straight into the bay, creating a lee shore. It was building from the WNW and quite choppy. Fetch from Phuket Island was a decent distance for it to build up. Bob says, “I would put a general warning out for now for Ao Labu Bay on Koh Yao Yai for unsafe grounds and that Navionics and other chart programs made not match the landscape perfectly and could be some 300m off until a more accurate location can be given.”

Andre and Hazel did temporary repairs with sikaflex and plywood to try to block the holes that were formed by being bounced on the rock/reef. They then motored for nine hours in the bow-down configuration back to Chalong Bay and then up on the hard soon after.

The yard owner “Manop” of CBS Boatyard Chalong Bay dropped other haul in and out commitments specially to accommodate the cat under the circumstances. They first attempted to get it on a cradle with no success so left it to dry out and jacked it onto a trailer at low tide and moved it ashore.

Bob reports a final word from the owner: “He was very impressed with his Bob Oram design that it suffered so much damage and was still afloat and he could still motor her to safety. To be honest if this had have been a mono it would probably have still be there as the one is still there on Kata Beach. Not getting into the mono against multihull debate but I do feel that would be the case.”

You can view more pictures, including a close-up of the damage, on our Facebook page.