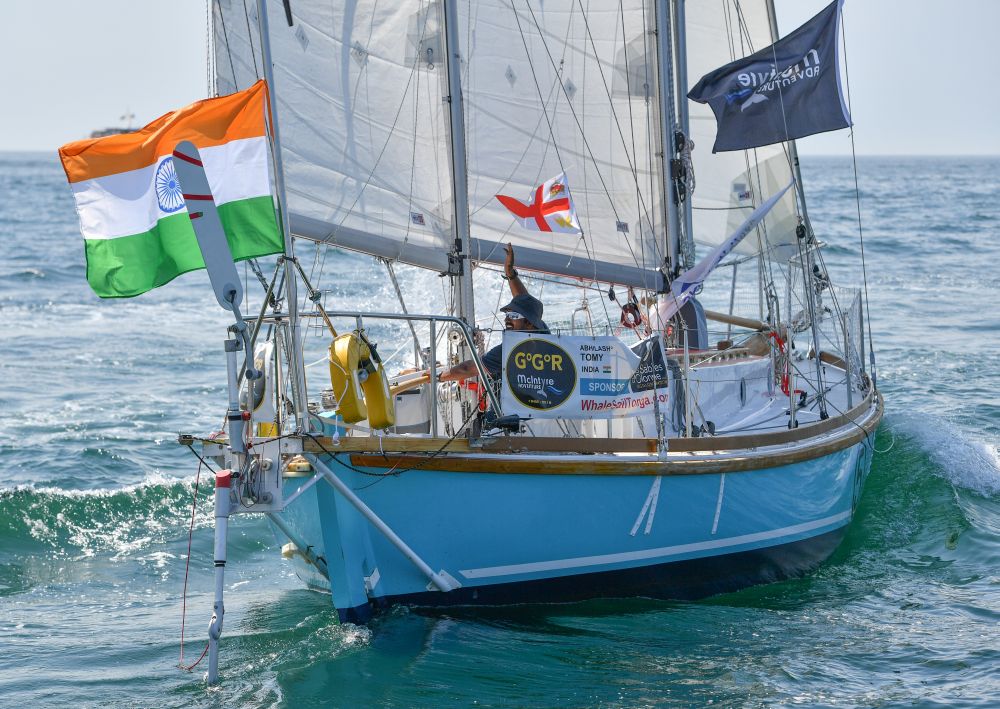 From subsequent messages, rescue authorities in Australia and India now know that the 39 year-old Naval Commander is safe on board his disabled yacht Thuriya, but lying immobilised in his bunk.

The MRCC in Canberra has subsequently picked up the yacht’s emergency signals and is now coordinating a multinational rescue mission.

An executive jet has been dispatched from Perth, Western Australia, to assess the situation and is expected to reach the area at around 02:30 UTC Sunday.

The plane has sufficient fuel to remain on station for three hours, when her crew will assess the damage to the 36ft Indian yacht and attempt to make radio contact with Tomy.

McGuckin has since set up a jury rig and is attempting to motor sail the 90-mile distance to Tomy’s position.

The Australian authorities are also repositioning a search and rescue plane to Reunion Island to assist in the rescue mission, together with the Anzac class frigate HMAS Ballarat, which is preparing to leave Perth. She will take four to five days to reach the area, but has a helicopter and full medical facilities on board.

Much closer is the French fisheries patrol vessel, Osiris, which expects to reach Thuriya some time Sunday PM UTC. She also has medical facilities on board.

Independently, Indian authorities have dispatched a military plane from Mauritius, which could reach the area around 23:30 UTC today and also diverted the Indian Navy's stealth frigate, INS Satpura, and tanker INS Jyoti Mission from exercises off South Africa to assist in the rescue.

At 10:00 UTC today, Gregor McGuckin made a satellite phone call to Race HQ. The yachtsman reported he had utilised his spinnaker pole to rig a simple jury rig, but found that the alloy tube was bending in heavy gusts.

McGuckin is also having trouble with the engine, which keeps stalling. This may have been caused by fuel contamination when the yacht was rolled and dismasted on Friday.

He is also having to hand-steer after his wind vane self-steering was smashed by the falling mast. Regardless, Gregor is making best time to Tomy and estimates he could reach Thuriya’s position between 18:00 and 24:00 UTC on Sunday.

Race organisers are providing him with regular range and bearing details.

Dutchman Mark Slats, who is some 250 miles south-west of the rescue area, has been excused from turning back to assist. He is still facing 40-knot winds and 15 metre seas, and was washed overboard during one of several knockdowns early today, but saved by his safety tether.

Slats reports he has never seen conditions as bad. One wave crashed down on his boat Ophen Maverick, smashing through the companionway washboards. It flooded the yacht’s electrics causing a small fire, which was quickly extinguished.

The rest of the GGR fleet have done well to make north to avoid a second viscous storm now approaching from the west, which should now pass south of them. There will still be big swells and strong winds, but nothing like the middle fleet experienced over the past 24 hours.

Race organisers continue to work closely with The Australian Joint Rescue Co-ordination Centre and are extremely grateful for the efforts being made by all involved.