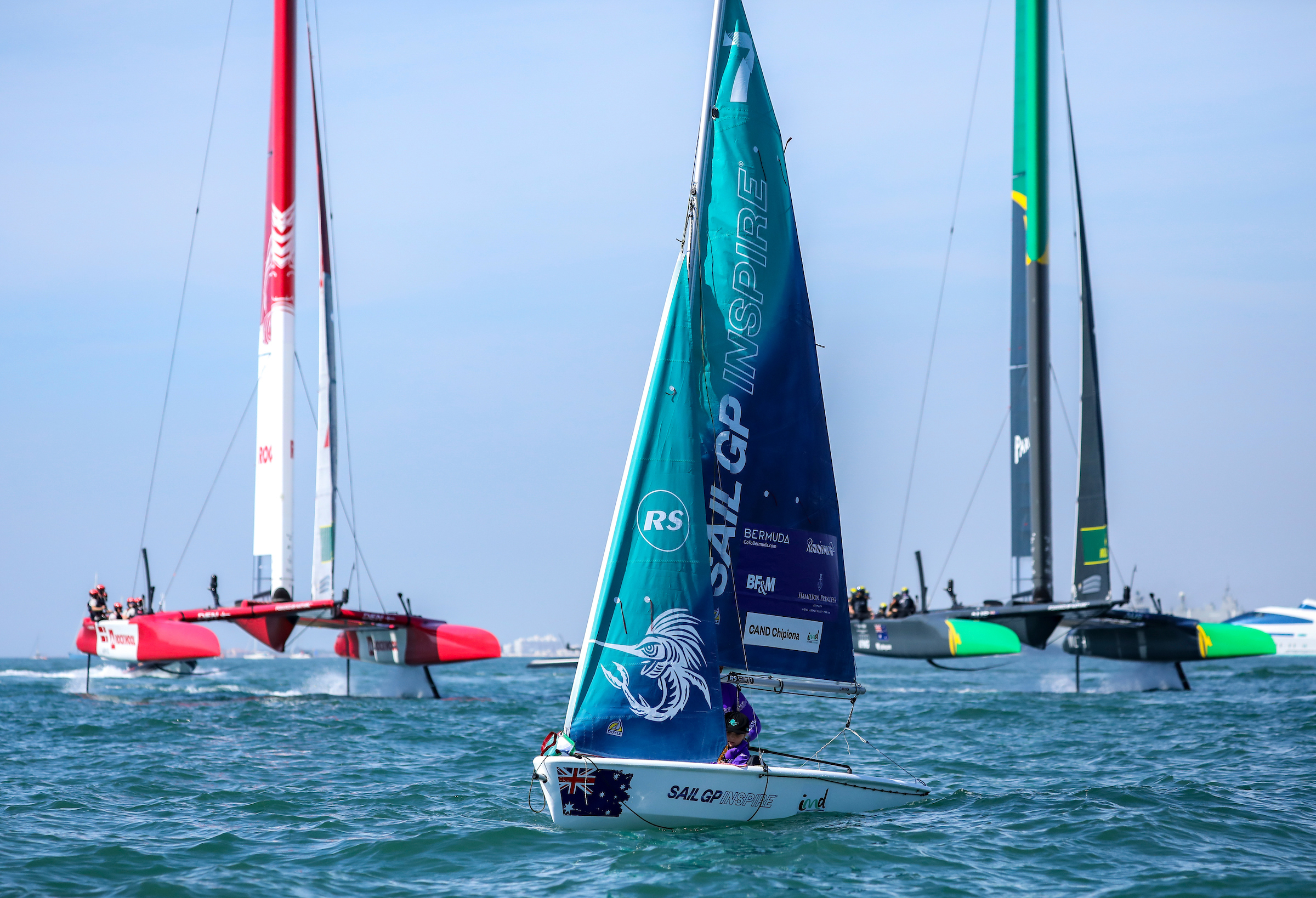 SailGP’s next installment of its Inspire Careers and Racing programmes is set to provide 42 young people with once-in-a lifetime opportunities, both onshore and on the water.

The league’s purpose-driven community outreach programmes continue to build a more inclusive talent pool – increasing diversity and accessibility to the sport – for SailGP and the wider sailing industry as it uses sport for good in its Race for the Future.

With the Australia Sail Grand Prix presented by KPMG taking place on December 17-18, Inspire Careers candidates will be participating across 10 roles supporting a combination of the league, and for the first time each of the SailGP teams during the event. Taking to the F50 race course are 32 young sailors represented by an even number of males and females – eight pairs on board the RS Feva class, and 16 individuals foiling on WASZPs – exhibiting their skills and passion for sailing as part of Inspire’s Racing program.

The future of sailing not only depends on the replenishment and development of athletes, it requires a network of exceptional support staff and crew. There to ensure the success of its respective SailGP team is dedicated and skilled personnel that work alongside the league’s operations teams, to ensure the boats and athletes can perform at the highest level.

For the first time since its inception, the Inspire Careers program will provide candidates with an opportunity to experience the inner workings of a SailGP team as part of a new shore team work experience initiative. Launching during race week in Sydney, each candidate placed within a SailGP team will be supporting the technical departments with the build and maintenance of the F50, which may include basic maintenance of winches, rigging and fairing, as well as shore team operational support with the wing, foils, and support boats.

Positioned with the league’s race management team, and on-water operations team are Riley Vallance and Luke Ingeman. Both candidates are from Australia and expressed a keen interest in the league’s operations.

SailGP’s highly anticipated return to Sydney Harbour is about to ramp up with the dazzling addition of homegrown talent getting the once-in-a-lifetime chance to showcase their skills onboard RS Feva class and WASZP foiling class boats on the same waters that the F50’s and it’s world-class athletes will race, providing real inspiration for the next generation.

Integrated with Inspire’s Adopt-a-Club programme, eight sailing clubs were chosen in partnership with Australian Sailing and include ones that are not only centrally located in Sydney but on the fringes of the city as well. While proximity to SailGP’s event played a role in the overall club selection, the strength of the club’s youth sailing programme was a key factor. Each of these clubs were then able to nominate two young rising stars to represent their respective clubs in the RS Feva class. Training on the RS Feva will kick off on the morning of December 17, followed by racing action that same afternoon and continuing on Saturday, December 18 ahead of the main event.

Australian Sailing manager for NSW/ACT, Emma Humphries said: “SailGP’s Inspire programme truly is inspirational. Australian Sailing was very pleased to facilitate the pairing of local clubs with SailGP teams for Inspire’s Adopt-a-Club community outreach initiative, which is tied into its Racing component featuring the RS Feva boat class. Collectively, SailGP Inspire’s Learning, Careers, and Racing programmes are giving young sailors a once-in-a-lifetime experience both on and off the water while also leaving a legacy for the clubs involved.”

A strong contingent for Season 2, all 16 WASZP racing candidates – eight male and eight female sailors (U21) – represent the host country, Australia. The thrilling experience of foiling technology is amplified for these young sailors as they take to the F50 race course in Sydney Harbour for the first time in front of family, friends and sports fans.

Australia SailGP Team athlete Nina Curtis said: “It’s been so refreshing to see young Australians applying for the Inspire program, with so much talent across the country and especially seeing young female athletes getting themselves on these high performance foiling WASZPs. Inspire Racing is a great way to create a pathway through SailGP that can connect to the teams and the Women’s Pathway Program.”

The Australia Sail Grand Prix presented by KPMG will be teeming with spectators this Friday, December 17, and Saturday, December 18 both onshore and out on the water. Event details, including any remaining ticket sales, can be found at SailGP.com/Australia. For those unable to attend, following all the action is just a click away. Visit How to Watch for more viewing options.