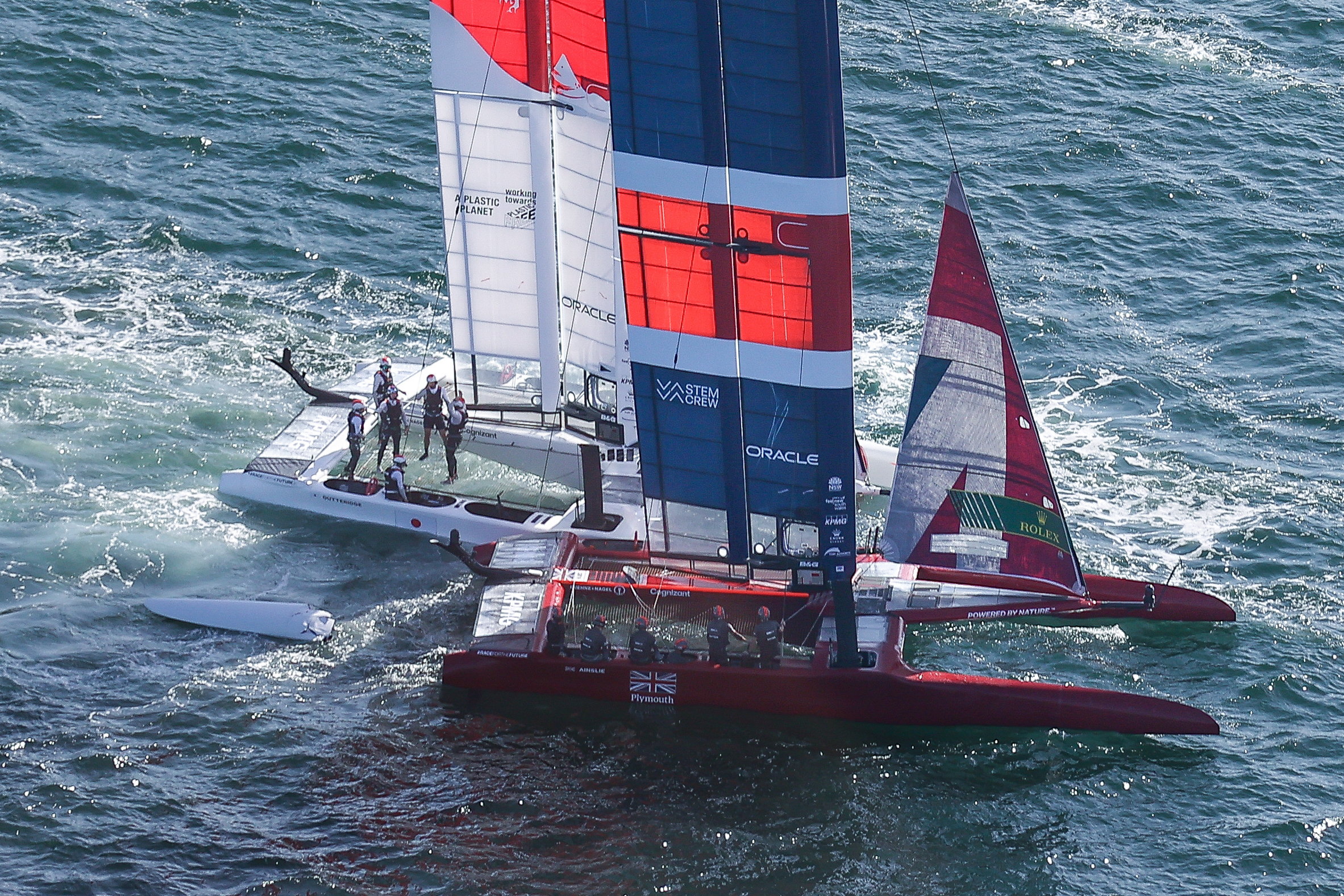 Great Britain SailGP Team pulls up alongside the Japan SailGP Team F50 catamaran after the two collided before the start of Race 3. Pic - David Gray for SailGP.

The opening day of SailGP’s seventh and penultimate event of Season 2 saw destruction on the harbour, as Sir Ben Ainslie, the most successful sailor in Olympic history, sent the Great Britain SailGP team right through the bow of the Japanese boat in race three – clearing the way for Tom Slingsby’s Australian team to win their first race of the day.

Ainslie claimed to have not seen the Japan boat, saying he was focused on Jimmy Spithill’s USA F50 as he approached the start line, and he admitted he was entirely at fault for the collision. All sailors were unharmed in the crash.

For the hometown hero Australians it was a rollercoaster day, with a solid third place in the first race before technical difficulties saw them come second last in the second. Running repairs were quickly applied, and in the wake of the collision drama, Slingsby drove the Australian F50 home fastest in the third race, delighting the home crowd who turned out in their thousands on the harbour and on Shark Island.

Slingsby said: “We had a nice first race, battling away with Ben Ainslie’s Great Britain team and the Spanish team, but we had a really tough second race, and we were actually lucky to beat even one boat.

“In the last race, we finally got some clear air, we got off the line well and were able to catch the Spanish at the second beat. Life is easy if you’re around that first mark in good shape. The racing is just so hard and tight when you’re back in the pack, with everyone slowing each other up. If you get clear air – it’s a different race.”

Surprisingly, the most consistent team on Day One were the Spanish, Phil Robinson’s team taking maximum points in winning the opening race, and finishing second and third in the following races. Jimmy Spithill’s USA team improved as the day went on, finishing second behind Slingsby in the final race after earlier coming sixth, and then third.

The Japan SailGP team boat has been ruled out of racing tomorrow due to the extensive damage caused. For Ainslie, the consequences of the crash would appear to extend far beyond the Sydney event, with his team certain to miss tomorrow’s racing for causing damage to the Japan boat. The Chief Umpire has determined Great Britain will also incur a six-point penalty for the incident in the Sydney event and lose two points from its overall season standings.

Heading into this event, the Australia team were topping the leaderboard with 45 points, one point clear of Japan and the United States, with Great Britain in fourth place. The grand final in San Francisco, March 26-27, will see the top three teams on the championship leaderboard fighting it out for sailing’s top prize of US$1 million.

Today’s incident will have monumental implications for the broader championship standings, and it remains to be seen just how much it will impact Japan’s chances of featuring in that grand final – having seemingly already ruled out Great Britain.

Great Britain SailGP Team Driver, Sir Ben Ainslie said: “We were coming back into the final moments of the start of Race Three and there was a group of us fighting for the top end of the line. We were very close against the Americans so we were in a defensive mode against them, and I just completely didn’t see the Japanese boat at all. There was a moment where someone on board said they could see the Japanese but by that point we came in sideways which was obviously devastating for both teams.”

Japan SailGP Team Driver Outteridge said: “It’s just reckless sailing and we can’t believe no one was squashed. It was a situation where we had nowhere to go even though we had full right of way. We know that it was never Ben’s intention to run into us like that, he just never saw us and we were a bit of a sitting duck – there was not much we could do to get out of the way.

“It’s definitely ruined our boat and is extremely disappointing considering all the work that has gone into this.”

Tomorrow sees two more fleet races, before the top three teams compete in the final, with racing kicking off at 4:00pm. The action can be watched in over 175 territories, including live on Fox Sports and KAYO in Australia. Full details can be found at SailGP.com/Watch.