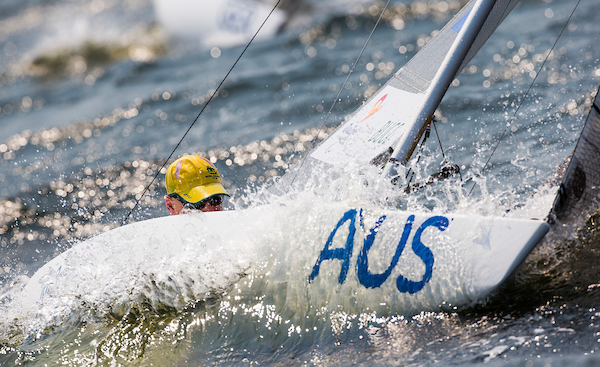 Australia moved to the top of every fleet at the Rio 2016 Paralympic Sailing Competition thanks to a thrilling finish in the final race of the day in the One Person Keelboat (2.4 Norlin OD).

Already sitting very pretty at the top of the Two Person Keelboat (SKUD18), the Australian Three Person Keelboat (Sonar) team sailed consistently again to hold on to top spot before a determined Matt Bugg made it a clean sweep for his nation at the end of race day four.

With world champions galore in the 2.4 Norlin OD fleet, Bugg can mix it with the best calling upon a wealth of competition experience. But it wasn't until April 2016 that the Aussie sailor won his first international regatta. Now he is threatening to take the biggest prize of all from under the noses of a high calibre fleet.

Sailing consistently, and it seemed quite quietly, Australia's Matt Bugg has been hanging around the top five positions in every race.

While the attention has been on the world champions and Paralympic gold medallists in the fleet, Bugg has just been plugging away, getting good results. Now he can no longer fly under the radar with two bullets and a second place from three day four races.

Bugg sit's just one point ahead of Great Britain's defending champion, Helena Lucas, thanks to a photo finish in the final race of the day. Talking about his ongoing duel with the Briton, Bugg said, “It was really close. That's twice today Helena and I finished with a metre between us and now there's one point between us as well,” he chuckled.

“It's amazing, you know, the difference between coming first or second in the last race of the day and what sort of mood that can put you in for the rest of the night. Yesterday I was annoyed because Helena got me right on the line and today I'm stoked because I got her right on the line.”

The Australian has been the most consistent sailor so far in the fleet, but even he can't put his finger on why that is, “I'm not sure how I've done it. There's still a few races left where I can ruin that [consistency] though. But I think on these race courses you've just got to never give up. There's always a chance that you can get back in again and the same when you're leading, as someone can always catch up. You've really got to concentrate from the start of the first race to the last moment of the final race.”

On his day Bugg can, and has beaten everyone in the fleet, but it wasn't until the Sailing World Cup Hyeres in April this year when he beat everyone together at the same event, “I've always known I can beat these guys but until then [Hyeres] I'd never beaten them all in the same regatta. Of course it gave me the confidence that I could win races and also win regattas. Confidence is very important in this game.”

More confidence can be taken from sitting on the top on 16 points looking down at the rest of the field behind him, but only just behind in Lucas' case as she has 17 points.

There are always two sides to a story and hearing from Bugg on his budding rivalry with Lucas, it was only right to ask the Briton the same question, “The last race was all going quite well and I was feeling quite chilled, playing the shifts and then literally, I was keeping an eye on Damien, the French guy, because he was second and I didn't really think I needed to worry too much about Matt. But literally I looked over and he's got this massive lift and caught up loads.

“We went round neck and neck at the top mark and then down the run it was neck and neck. Across the finish I caught a wave and surged forwards and I thought I'd got it so it was that close.”

Lucas may have been shocked to see Bugg in her rear view mirror in the last race, but not at the top fighting for gold, “Matt's had a great year. He's really found his form this year. I always thought Heiko [Kroeger] and Damien [Seguin]. Damien still is certainly one to keep an eye on. Matt's showed some really good performance this year and I always knew he'd be somebody to keep an eye on.”

With Christ the Redeemer looking down on the sailing areas, Lucas is hoping for a bit of divine intervention of her own to get Bugg out of his top five streak, “I'm hoping the gods of Brazil might be able to rustle something up tomorrow for me.”

Sitting in third on 23 points is former world champion Damien Seguin (FRA). With three races still to go, the Frenchman is not going to give up on a medal, and as he walks through the mixed zone he stops and says, “For now, I have one foot on the podium and I want a medal.”

To get that medal he needs to hold off the chasers, and with a gap opening up to fourth placed Dee Smith (USA) who has 31 points and Heiko Kroeger (GER) and Bjornar Erikstad (NOR) who have 35 points, Seguin will feel a hint of confidence.

How do you stop two Australian's in a boat? Well in the SKUD18 fleet it would seem that no one can answer that question.

London 2012 gold medallists, Daniel Fitzgibbon and Liesl Tesch, have continued to dominate the class and took two more bullets on day four to cement their place at the top of the pack. With a commanding 15-point buffer from the second and third placed Canadian and British teams heading in to the final stages of the competition, it would look like a Paralympic defence is inevitable, barring a complete 'disaster' of course.

With the Australian's on eight points, Canada's John McRoberts and Jackie Gay and Great Britain's Alexandra Rickham and Niki Birrell are continuously falling back and sit on 23 points. And there is a sense of defeat from both teams creeping in.

With a 2,5 for the day, Gay talks about the Aussie chase ahead of her, “Obviously we have three races left, I guess the Australian's could have a complete disaster. It could happen and it does happen. But we are just looking to maximise our performance and finish off this regatta as we started.”

The race for a medal is still on, even if it isn't gold, and Gay has a plan in place ready to go – avoid any disqualifications, “Tomorrows plan will be to stay clean. No one wants letters on the scorecard. People want numbers. So race clean is our thing. We never do that engaging thing anyway, we just race our race and do what we do best and sail hopefully.”

Not thinking much further than the next day's racing, Gay said, “To finish on the podium is just too much to think about at the moment, it would be amazing.”

Equal on points, Birrell talked through his teams 4,5 day, “The racing was great today in Rio, with good courses and good wind. Unfortunately, we didn't have a great day with not being able to get the boat going fast at all. The next three races are really important now, as it is super close between second, third & fourth now, and no one wants to finish fourth.”

Someone will have to finish in fourth and someone has to take gold, but Birrell is resigned to the fact it will probably not be his team, “I don't like to be negative and anything can happen, but we put on a lot of points today and the Australian's went 1,1.  I'm a positive person, but I think the gold is gone.

“I'm quite a positive person normally, or deluded normally, but now the gap is far too big. And our biggest concern is to sail well enough tomorrow to grab the Silver.”

The Britons will have to better the Canadian's scores to take the silver, but both teams will also need to keep one eye on Monika Gibes and Piotr Cichocki (POL) behind them. Sitting in fourth on 29 points, the Polish team took a second and a third to edge ever closer to the podium positions.

With not quite the same dominance as their compatriots in the SKUD18, the Australian Sonar team remain on top of the fleet to help their country lead across the board.

A bullet and a third gave Colin Harrison, Russell Boaden and Jonathan Harris another solid day of scoring, leaving them on 16 points to lead the fleet at the end of eight races. The Aussie team have been on it all week posting consistent top finishes, but to USA's Alphonsus Doerr, that isn't really a surprise, “Here's the thing, they have been the most consistent all year. Way back in Melbourne [at the 2015 Para World Sailing Championships] at the end of last year they were leading the regatta and just missed out at the end. Since then they have been on the podium in just about every regatta. Sailing World Cups. World Championships.

“It's consistency that wins and they are playing great ball right now. We would love for them to go haywire and we jump them, but we can only focus on our job.”

Doerr, along with teammates Hugh Freund and Bradley Kendell, are the closest challengers to the Australians and had a mixed day with some indecision counting against them in race one, “There were lots of debate for us other whether we played the current or the wind shifts and it confused us a little bit. We were just overthinking it.”

All singing from the same hymn sheet in race two, the Americans got back on track, “The second race you could use the current more. We did that and got a second after a fight with our mates and training partners, the Canadians. Overall we are pleased with the day though and we will take second on the leaderboard.”

With Australia on 16 points, USA on 27 points in second and Paul Tingley, Logan Campbell and Scott Lutes (CAN) on 35 points leading a chasing pack in third, it's hard to know which way Doerr and his teammates need to look, “I'm trying to figure if it's a 50/50 or 60/40 thing. We still look forward, and we always will look forward. But it's a tough question. We have to look forward but also look back at what's chasing you.”

Anyone in the top nine is still in with a shout of a medal in the Sonar. With a gold medal from Athens 2004, Israel's Dror Cohen is hoping that him and his teammates Arnon Efrati and Shimon Ben Yakov can sneak in above a tough field for another Paralympic medal, but he knows it won't be easy, “At last we had a consistent day today. I need to see the scores but I know it is close. We will fight to the end and try to get it but it's going to take persistence and whoever wants it more will get it.”

The obvious next question. How much does Cohen want it? “I want it the most.”

Cohen sits in seventh place on 38 points, in the mix of six teams separated by five points currently chasing the bronze medal.

The racing continues at the Rio 2016 Paralympic Sailing Competition on Friday 16 September with all fleets scheduled for two races. The Sonars are on the Escola Naval course at 13:00 local time with the SKUD18 and the 2.4 Norlin OD fleet on the Pao de Acucar (Sugarloaf Mountain) area at 13:00 and 13:10 respectively.