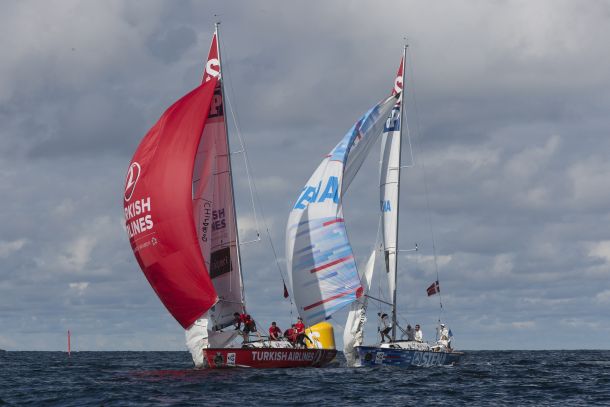 At the end of play of day one on this second stage of the 2014 Alpari World Match Racing Tour, it is the Waka Racing and Team Alpari FX teams of New Zealand’s Phil Robertson and Australian Keith Swinton respectively, who lead, both currently on 5-0.

Robertson’s most exciting race was against Swede Johnie Berntsson. As he recounted: “We had a touch in the start, possibly a rig clash. We got the penalty and were behind for the whole race and were slowly chipping away at him. We managed to catch him at the second top mark and did a really good set, got down inside and gave Johnie a bit of heat. Then he tried to gybe at us, but we managed to wipe the penalty off and get the lead. That was a perfect win.”

“We had a lot of exciting ones today, which isn’t what we’d hoped for,” admitted Williams.

“We had three races where penalties were crucial. In two of them we got the penalty and one of them we were able to shake it off and the last one with Taylor [Canfield] there was a crucial penalty at the top for gybing too close. We were pleased because he had a good lead on us up the first beat, but we managed to track him down, get the hook and get back really into the mix.”

Canfield, the defending Alpari World Match Racing Tour champion, ended up receiving a red flag penalty on the run, but was then deemed by the umpires not to have dropped his spinnaker adequately and had to carry out the penalty again. As the USone team was attempting to untangle its spinnaker and forestay, Williams was untouchable.

Williams lost his one match today to the youngest skipper at Stena Match Cup Sweden, 20 year old Dane Joachim Aschenbrenner. Williams received a pre-start penalty, but then the two boats were never separated by more than a boatlength for the rest of the race. At the second top mark rounding, Williams, in the lead, tried to expend his penalty, but Aschenbrenner was able to slip out of trouble and then carefully covered his opponent all the way to the finish.

Luna Rossa skipper Francesco Bruni took on both of the ‘Tour legends’ today – American Ed Baird and Swede Magnus Holmberg – and won against both. “It is always good to win against ‘the old foxes’,” said the Italian America’s Cup team skipper. “They really know the game and they don’t make too many mistakes. It is hard to beat them. We had a couple of days of training before coming here, which I’m not sure they had. So that may make the difference.”

Stena Match Cup Sweden founder and former America’s Cup skipper Magnus Holmberg felt that his 1-5 score line didn’t reflect how well his team had sailed today. “When you are out of form, it is usually just a small thing here, and a small thing there – not the big things. We are on the steepest learning curve. I just hope we keep getting better and keep moving on.”

Particularly painful was losing the matches against Tour Card holders, Phil Robertson and Mathieu Richard, despite having led them most of the way around the course. “With Robertson we lost out on a tacking duel, with a new rule I wasn’t used to, so that was a learning situation.” Then after winning the start in their match against Francesco Bruni, they misjudged sailing around an obstacle on the course and ended up falling behind.

“We are not far off, we just need to get the details right,” Holmberg concluded.

The full replay of today's Qualifying matches are available on new.livestream.com

Qualifying at Stena Match Cup Sweden continues tomorrow with racing due to get underway at 0930CET and is being streamed live on www.wmrt.com or via https://new.livestream.com/WorldMRT/smcs14-qs2. More updates are also available on the Official Facebook Page and Twitter Page @worldmrt