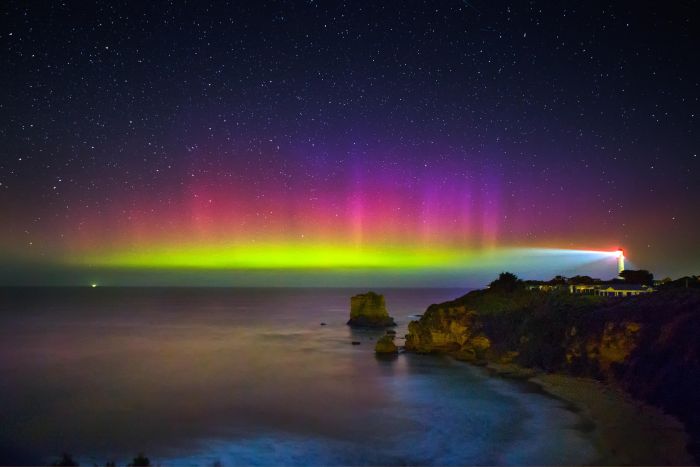 The aurora australis at Aireys Inlet

Sky gazers may be in for a treat this week, with increased solar activity bringing the potential for dramatic light displays to occur in skies over southern parts of the country.

The heightened chance of aurora activity is expected to occur from Wednesday and into Thursday this week and will be best viewed from parts of Tasmania and southern areas of Victoria.

Bureau of Meteorology Space Weather expert Dr Zahra Bouya said the colourful light shows are relatively rare for this time of the solar cycle and are due to a number of solar eruptions from the sun's visible surface.

“We are currently monitoring two coronal mass ejections (CMEs), which are large clouds of plasma that are ejected from the sun and travel at high speeds through space. They are both relatively slow moving and our model predictions have them passing over us on 15 and 16 May.

“When this material reaches Earth, most of it is deflected by the planet’s magnetic field. But as the CME passes over the Earth its magnetic field may connect with ours allowing huge amounts of energy to be transferred to our magnetic field, generating geomagnetic storms that can last for two or three days and produce dramatic auroras over successive nights,” she said.

“While there is a greater chance that aurora australis enthusiasts may witness the spectacular show of lights this week, it's never guaranteed. To see the aurora, you'll need a very dark and clear night so early morning, after the moon sets, between 3am and 5am, is best over the coming days. Headlands or a dark beach are usually the best viewing spots,” Dr Bouya said.

Bureau meteorologist Philip Landvogt said the best viewing conditions in Tasmania would be along the east coast, north of Hobart, although partly cloudy conditions were currently forecast.

“In southern Victoria, cloudy skies are forecast on Wednesday with the best viewing conditions expected on Thursday night when it will be mostly clear with just some isolated fog patches,” he said.

For more information about Aurora australis visit the Bureau's Blog or watch the Ask:BOM What is an aurora video.