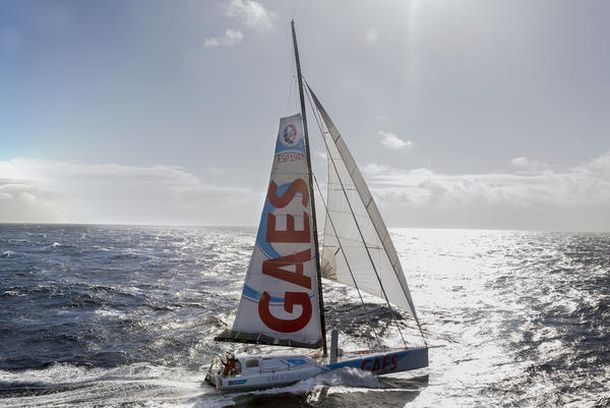 On this 60th day of racing since leaving Barcelona on a warm, sunny winter's afternoon, 1300hrs local time Wednesday 31st December, each of the top three are dealing with their own different options.

Bernard Stamm and Jean Le Cam are working strong W and SW'lies. But with the dominant high pressure to their west and moving east off the South American coast they are riding the top corner of a Roaring 40s' low. The combination is pressing them ever further east.

Later this Sunday evening their breeze will drop away until they gybe tomorrow into the stronger downwind flow. While the Swiss-French duo had lost over 100 miles to the chasing pair, Neutrogena and GAES Centros Auditivos who were both fast coming into Cape Horn, the net gain today is back to Cheminées Poujoulat, returning their advantage above 1000 miles.

Neutrogena, in second, are heading west of north. Sailing upwind, they have tacked this morning and again early this afternoon and are making a steady 9.6kts, just NW of the Falkland Islands. Guillermo Altadill and José Munoz are set to have light upwind conditions right through to morrow and so that deficit to the leader will increase

Having been as close as five miles apart in the south Pacific, now Anna Corbella and Gerard Marín are 150 miles due south of rivals Neutrogena. And the Falkland Islands are driving a wedge between the two Farr-designed boats. GAES Centros Auditivos are going east of the island group, trying to stay with the stronger wind pressure.

Eighteen hundred miles of the Pacific, or about five to six days racing, stand between the Garcia brothers Bruno and Willy Garcia on We Are Water and their ever first Cape Horn passage.  They are set to be the race's first Cape Horn first timers. They are 194 miles ahead of One Planet, One Ocean &Pharmaton and the brothers have sailed the fastest in the last 24 hours with an average of 17.1 knots and 413.2 miles traveled.

The chances for Renault Captur to be on their coat tails by the left turn at Cape Hor n seemed to have diminished since Jorg Riechers and SébastienAudigane have slowed as they seek a solution to their rudder problems which seem to be an ongoing source of stress.

“It can be a concept or an adjustment problem from the beginning. We could do nothing about it before because we knew nothing about it. We are really cautious not to break the other rudder, because where we are now we don't want to have any breakages.” said Riechers today. “We have rudder problems again. On starbord tack it is unsteerable. That is why we are so slow at the moment. When we gybed, the rudders were always stalling to the point of broaching. The only solution was hoisting the J3 and sailing with two reefs in the mainsail. That is really, really slow. We have to wait for daylight to find a solution.“

Rest has been part of the main agenda for Nandor Fa and who were very tired when they left Bluff, NZ after a very inten se but fruitful technical pit stop. But now Spirit of Hungary are making 16kts in 20-25kts of N'ly winds.