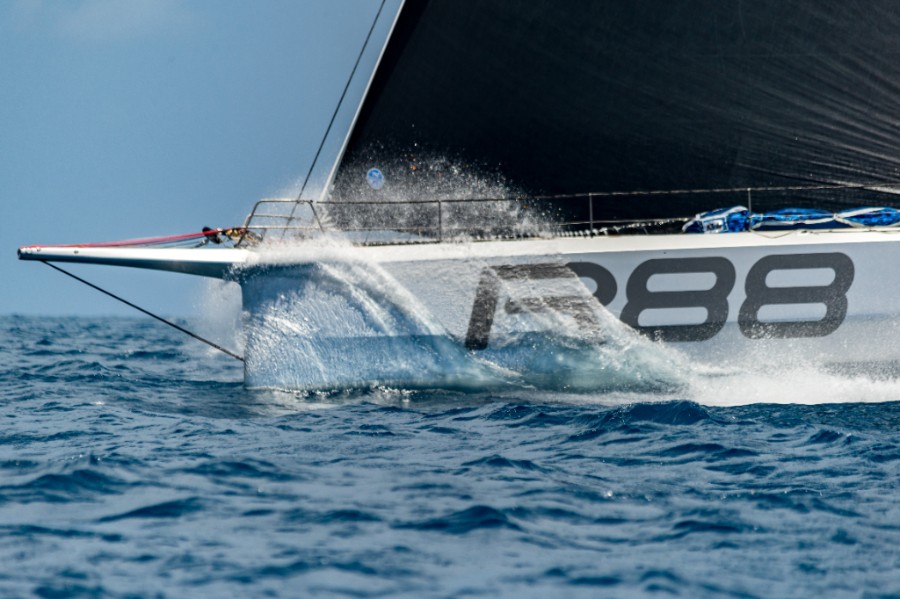 A highly competitive start was followed by a flexi-course, PRO Stefan Kunstmann sent the fleet on a two-mile windward leeward course around laid marks, with a fetch to a turning mark, before the fleet headed out into the Atlantic under spinnaker.

George David's American Maxi Rambler 88 led the fleet away at an astonishing speed. Under full main and A3, Rambler 88 was flying over 800 square metres of sail area. With a high level of squall activity in the starting area, Rambler 88 put in two uber gybes to chase the rain-storms. The Maxi is the hot favourite for line honours, and there was no holding back Rambler 88, which unleashed full power, pounding through the surf at 20 knots of boat speed. Jens Kellinghusen's German canting keel Ker 56 Varuna V was second on the water, ten miles behind Rambler 88. Boris Hermann's German IMOCA 60 Malizia – Yacht Club Monaco is third.

“Heading to the start along the Great Sound, the inshore waters of Bermuda are crystal clear and turquoise.” commented Boris Hermann, Skipper of Malizia – Yacht Club Monaco. “The start was not as easy for us, as it is more difficult to make tight manoeuvrers with an Imoca short-handed, but everything ran like clockwork and as expected. The boat's acceleration is fantastic, but we were a bit too high, so after the new GFS Model came in via satellite, we then changed to the big spinnaker for faster boat speed. The mood aboard is good, the watch system has started, and I am looking forward to not sweating as much as when I race solo!”

Catherine Pourre's French Class40 Eärendil got a good start to lead the division after four hours of racing. Mathias Mueller von Blumencron's RED was just two miles behind, and Sönke & Arnt Bruhn's Iskareen was in third place. All of the fleet are north of the rhumb line, the Azores High is positioned far north and extremely well established. A low pressure system, which has been upgraded to Tropical Storm Chris is expected to make its way north along the Eastern Seaboard of the United States. Whilst the AAR fleet are unlikely to experience the full effects of Tropical Storm Chris, stronger winds are forecast later in the race. Susann and Kay Wrede's Swan 44 Best Buddies started the race in the Cruising Division six days ago, and is currently one thousand miles ahead of Rambler on the water.

Four hours into the race the vast majority of the fleet were experiencing double-digit boat speed. Torsten Grotjahn's Swan 44 Dantes and Hanns Ostmeier's Swan 45 High Yield were bring up the rear. However, all of the fleet are out of sight of Bermuda, the next land they are likely to see, will be The Lizard, Cornwall UK, 2,800 miles across the Atlantic.

NRV Commodore Andreas Christiansen watched the start of the race, having exchanged burgies with the Royal Bermuda Yacht Club Commodore, Jon Corless. “The NRV and the RBYC have an association which started fifty years ago.” commented Christiansen. “We have been given a great welcome in Bermuda, and congratulate the Royal Bermuda Yacht Club for playing host to such a prestigious race.”