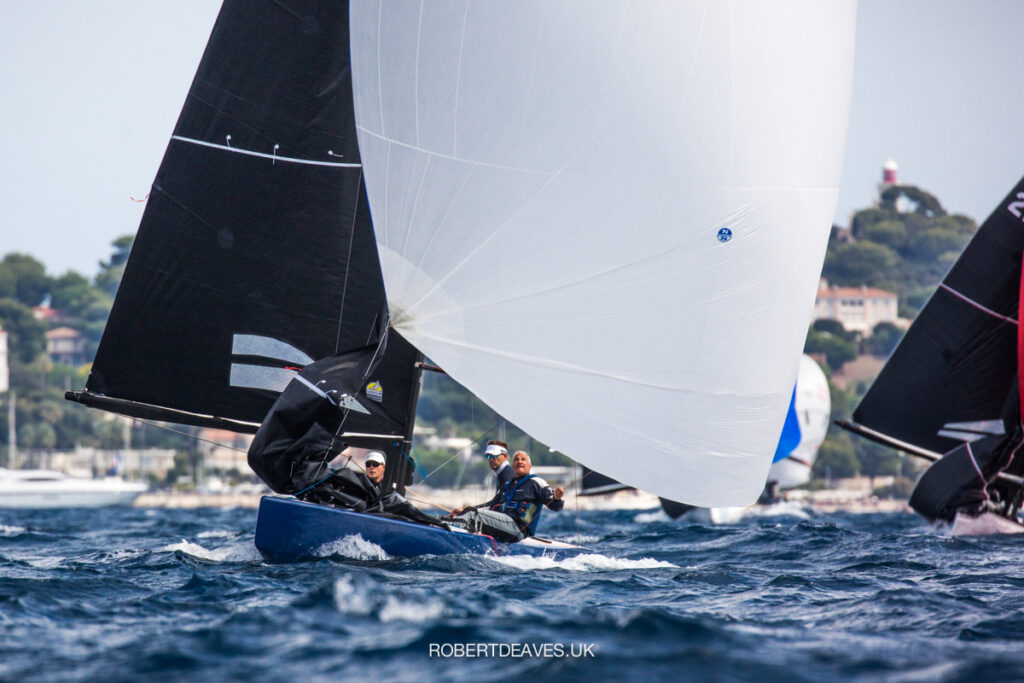 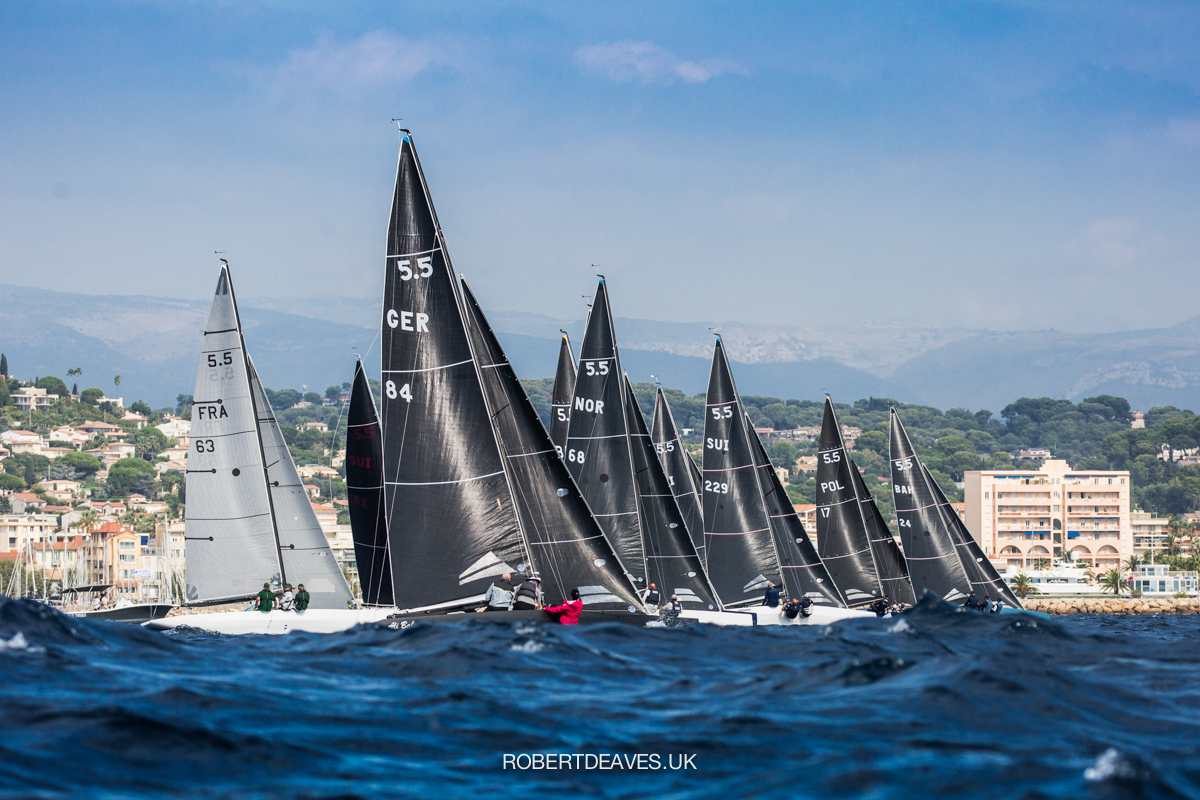 Conditions were challenging on the penultimate day of competition. Pic - Robert Deaves

Aspire (POL 17, Mateusz Kusznierewicz, Przemysław Gacek, Simon Fry) moved into a six-point lead on the penultimate day of the 2021 5.5 Metre French Open at the Régates Royales in Cannes, following a day of changing conditions and some very close racing.

The third day of competition again brought great sailing conditions with the wind quickly rising to 15-16 knots in the first race before decreasing through the day to 6-8 knots for the final race.

New Moon and Aspire fought for the start in race seven, and although Aspire seemed to get the better of it New Moon was first away to the right to cross ahead and built a huge lead to take the race win. After some mark rounding problems Aspire recovered to cross second with Ali-Baba (BAH 23, Craig Symonette, Flavio Marazzi, William Alloway) in third.

Momo was first to the top in race seven with Aspire close behind. It was tight at the gate but Aspire rounded first at the right mark with Momo at the left mark. The right paid and Aspire passed ahead to lead down to the finish, with Ali Baba again crossing in third.

The wind had started to decrease for the final race of the day with some big shifts and pressure changes down the course. Aspire was quickest away to lead at the top from Momo and held them off downwind, but on the second upwind, Black & White went furthest left, hooked a big shift and moved from third to first to lead down to the finish for a big win, from Aspire and Momo.

Black & White sit in fifth overall after winning race nine. The regular crew of Daniel Schenker and Mark Dangel have been joined this week by Renato Marazzi.

Marazzi said, “I used sail with my brother and father, but I have not been in the class for eight years and Black & White asked me to join them here this week and it’s nice. Today was a better day than yesterday with a stronger breeze and we enjoyed it. We had some difficulties yesterday, but today we went much better.”

In the last race, “It shifted at the start and we were behind the line and had to tack and we were on the good side on the right and could take a good shift. We saw the compass and the course and hoped it would shift that way and in the end it did and it paid off. After the downwind we went to the left as there was a left shift and we could make good use of it. It was a big help.”

On sailing in Cannes, “I think it’s great to sail here with all these other classes. It’s the perfect venue being at the old harbour and seeing all these people and boats. It’s beautiful. Up to now we had perfect weather and have sailed do all the races and tomorrow we have two more races to see what we can do.”

Richter said, “It’s my fourth time here in the 5.5 and I was here before in the Dragon in the 1990s four times.

“It’s very nice – the weather, the wind, the sun. All is good. In Berlin it is raining and here it is sunny. And it’s very good racing here. We have wind, and have wine, and we have very good fun. It’s perfect.”

Aspire seem to be the team to beat and with a six-point lead they just need one more good race to seal the series.

They scored 2,1,2 today. Middle man, Przemysław Gacek, said, “We had good starts today, though we had a problem with the jib in the first race when it was very tight going into the gate when we were closing on New Moon. We lost some time, but still managed to finish second.”

He said the third race was very tricky with the lower wind strength. “We changed the jib and were well prepared. We had a great start but then we were searching for the right wind because it was changing all the time. So we ended second, but overall we are quite happy with our performance. It was also great training for us because we had one or two almost, let’s say, emergency situations so we were able to learn more. For us everything gets better.

“Today was tough, because after New Moon won the first race they were level with us, so there was some tension.”

Helm, Kusznierewicz, added. “We had an idea where to go [in the last race] but it didn’t work out. The boat which hit the shoreline benefited from this, but this is what happens when you are sailing very close to the shore and the wind is patchy, this is just sailing and we accept it. It’s the beauty of it.

“Congratulations to Black & White today. They had this approach to attack and it succeeded so well done to them.”

The Aspire team is only sailing their second season, so has not sailed many regattas yet because of COVID.

“We have now done nine races and still two to go. All the other regattas we have done have been much less races, so we enjoy every start, every beat and downwind. We are very positive. You do not always win the race but if you can manage your average well like we are doing then we are happy.”

Racing at the 5.5 Metre French Open in Cannes concludes with two more races scheduled for Friday with quite light wind forecast.