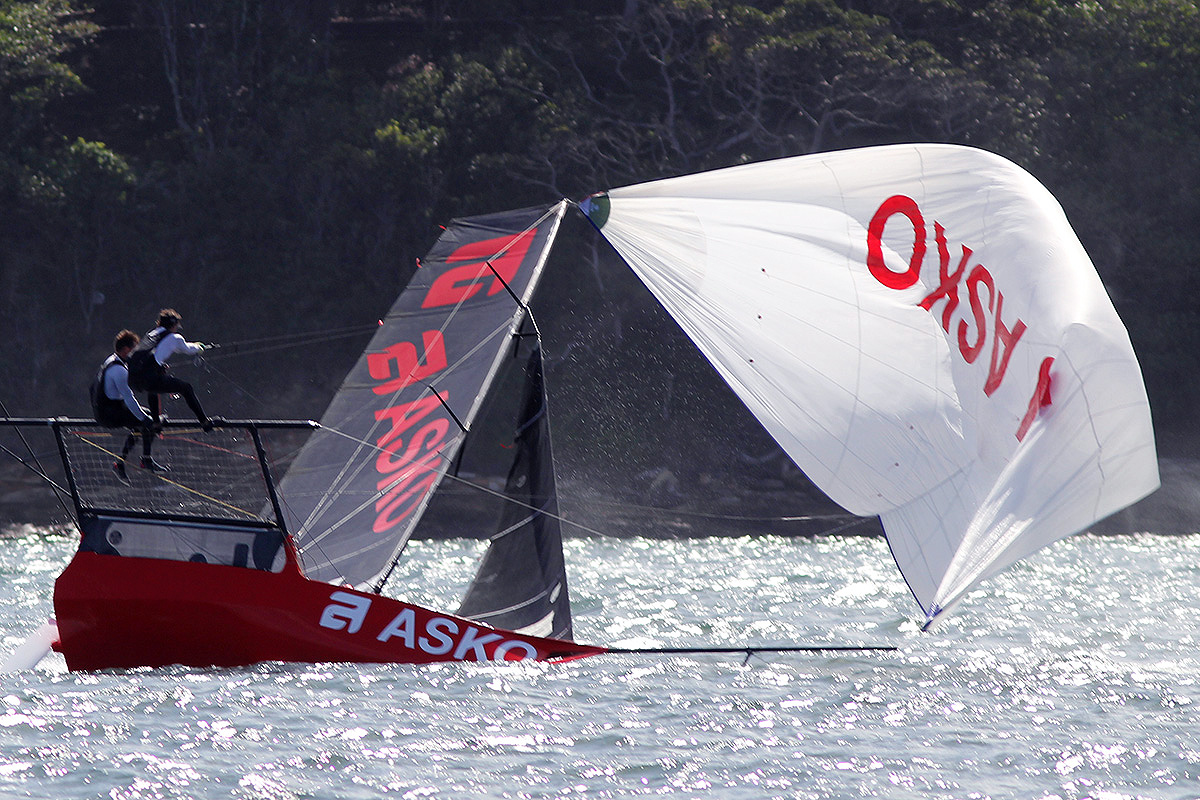 A moment which could have cost Asko Appliances the championship. Photo Michael Chittenden/18 Footers League.

The Asko Appliances team had to recover from a mid-race capsize before taking out the 2018-2019 Australian 18 Footers League Club Championship in a dramatic day of 18ft Skiff Racing on Sydney Harbour today.

Going into today's final race of the championship, Asko Appliances (James Dorron, Harry Bethwaite, Trent Barnabas) held a 3.4 points lead over arch-rival Smeg (Michael Coxon, Ricky Bridge, Mike McKensey) and had to finish no worse than three places behind Smeg to take their third championship title for the season, so far.

In a 12-15-knot South-East breeze, Smeg grabbed an early lead while Asko Appliances was never further back than third over the first three legs of the course.

Just when everything appeared to be going to the plot, Asko Appliances capsized on the tight spinnaker run from Clark Island to Chowder Bay and the team's championship-winning hopes seemed to out the back door as Smeg held a handy lead over Finport Finance (Keagan York, Matt Stenta, Charlie Gundy) and Bing Lee (Micah Lane).

Winning Group (John Winning Jr., Seve Jarvin, Sam Newton) was back in fifth place at the Clark Island windward mark, but the team went up a gear over the next four legs of the course and gradually chipped away at Smeg's lead until Winning Group took a 12s lead at Rose Bay on the final lap.

With just one downwind leg into Athol Bay and a windward beat back to the finish off Clark Island, the two experienced teams went leg-for-leg before Winning Group finally crossed the finish line 16s ahead of Smeg.

The consistent Finport Finance finish a further 39s back in third place.

Bing Lee faded a little over the last few legs of the course and fell back to finish in fourth place, ahead of a hard-charging comeback by Asko Appliances, to take the championship by a mere 0.4 of a point ahead of Smeg.

Final points in the championship were: Asko Appliances on 63 points, Smeg on 63.4, third place went to Winning Group on 92, followed by The Kitchen Maker-Caesarstone on 114, Finport Finance 115, and Bing Lee on 121 points.

The conditions were perfect for each team's final hit out before next week's JJ Giltinan (world) Championship and the fleet took full opportunity of the conditions with some spectacular down wind racing.

Katie Love, the US representative in the Giltinan Championship, finished 16th in today's race.

The club will have a spectator ferry following each of the seven days' racing, leaving Double Bay Public Wharf at 2pm.
NOTE: THERE WILL BE TWO SPECTATOR FERRIES ON SUNDAY MARCH 3 & SUNDAY MARCH 10.