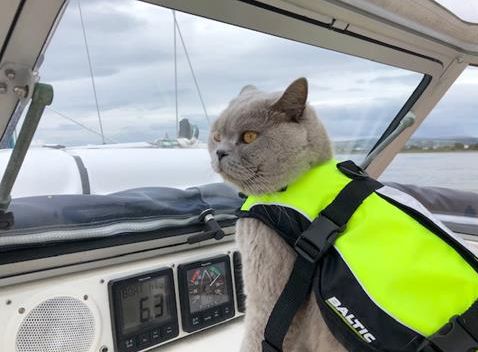 Artie, seen here in his feline lifejacket, snoozed quietly through the dramatic mission to rescue the yacht. It was snared on lobster pot-lines six miles north of town early on Monday morning (24 AUG).

'The cat was asleep in its cage but the door was open', reported Paul Huggins, the volunteer who boarded the yacht to cut one of the lines. 'It was just quite happy in its bed.'

Now Artie’s owners – or is it the other way round? – have contacted Scarborough RNLI to express their appreciation. 'We can’t thank you enough for all your help at silly o’clock in the morning,' said Tim and Row Heale.

'Sorry to have got you out of bed but, hey, cheers guys, we really appreciate your help and genuine attitude to helping those in need.

'We have made an online donation to the RNLI. Our meagre contribution probably wouldn’t cover your pager bill let alone the boats’ fuel bill, but from our hearts, and Artie the ship’s cat, we thank you.'

Tim and Row are members of the Army Sailing Association and the Royal Yachting Association. They keep their boat at the Hornet Services Sailing Club in Gosport, where they live.

Artie is a British short-haired smokey grey. He has a passport and all his inoculations are up to date. He’s well travelled and has been sailing since he was a 12-week-old young kitten.

Row says: 'He’s now into his second life jacket – he outgrew the first one – and he loves going ashore in the dinghy or our kayak.'

Being a cat, Artie avoids water but once got his tail wet when Tim and Row forgot to put his lead on the extended setting, when leaping onto a pontoon. 'He went donk mid-flight into the oggin, but he was hooked out to safety immediately,' Row says.

'Don’t be fooled by his grumpy look, he loves being on board.'

The couple’s favourite places to sail are around Denmark, Sweden, Norway and the Baltic. 'But this year, due to Covid-19 and quarantine regulations, we are sailing clockwise around the UK, anchoring as much as possible and only going ashore for water, food supplies or to wait for gales to abate.'