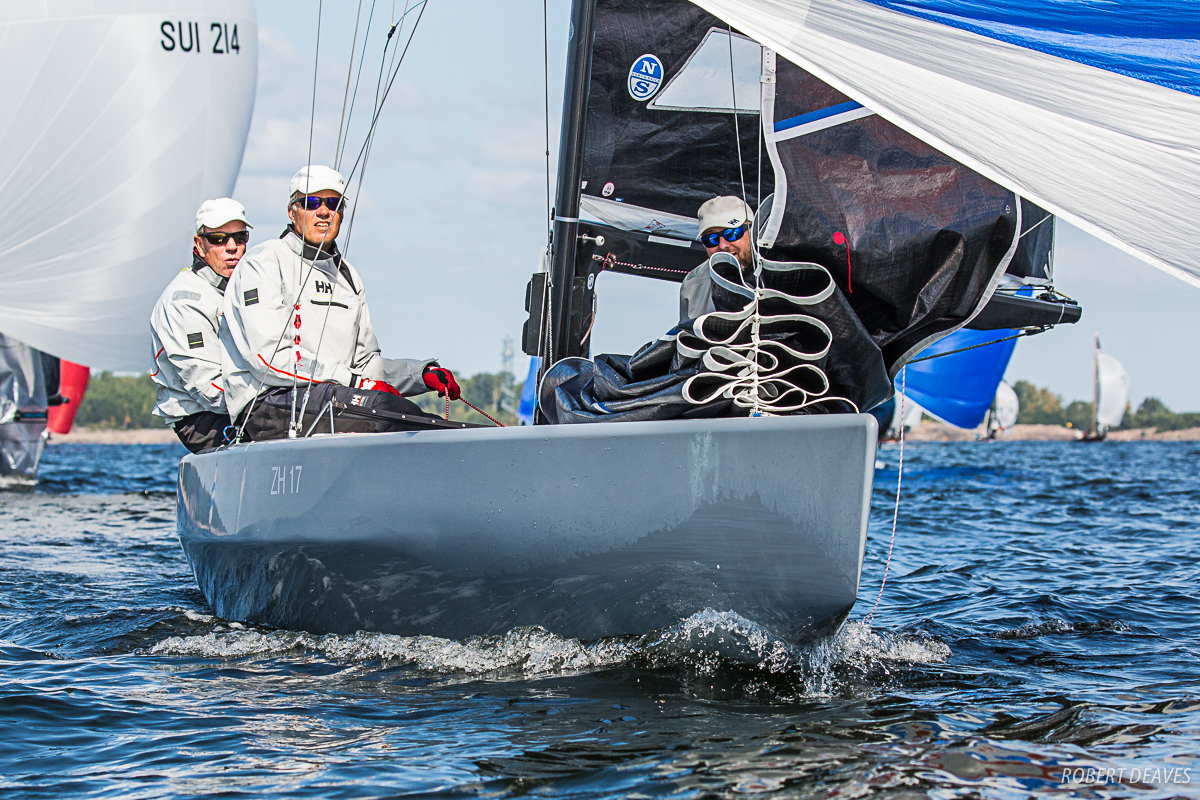 Artemis XIV (NOR 57 Kristian Nergaard, Johan Barne, Trond Solli-Sæther) has won the 5.5 Metre World Championship in Helsinki, Finland, after a dramatic final day in which they first lost the overall lead and then reclaimed it in the thrilling final race.

In winning the world title, Artemis XIV also takes the double after winning the Scandinavian Gold Cup last week, the first time this feat has been achieved since 2011, when it was also sailed in Helsinki. It was a dramatic last day with fortunes changing throughout the first race followed by a final race clincher for Artemis XIV.

The fleet set out an hour earlier than usual to try and make the best of the morning breeze, but the best breeze of the day had been reserved for the afternoon. The first race was beset by huge shifts and mark changes as the race committee tried to keep pace with the changes.

Artemis XIV led at the top and looked to have the race sealed, but with a 60-degree shift on the second upwind, Caracole (SUI 214 Bernard Haissly, Nicolas Berthoud, Daniel Stampfli) came through to take a commanding lead to win. Then on the final upwind, New Moon played the shifts well to pass Artemis XIV just short of the line.

This left New Moon with a one-point advantage over Artemis XIV with one more race to sail. The final race would be the decider. The wind was less than cooperative and after several course changes and one recall, the fleet got away in a building breeze that peaked at about 15 knots on the final leg.

Artemis XIV came out of the start of the final race with speed and protected the left to lead the fleet round every mark. It was tight at times, but she covered and watched the race develop from ahead and then when the breeze filled in on the final beat extended for a great win and another world title for Nergaard.

It was Nergaard’s ninth world title at the helm, and the fourth for the team with Johan Barne and Trond Solli-Sæther.

Marie-Françoise XIX (SUI 228 Jürg Menzi, Bo Selko, Knude Rasmussen) rounded off her best day of the week with a second after a fourth in the morning, with New Moon crossing in third.

Nergaard explained his day “To win the world championship today was great for the team, for Trond and Johan, as New Moon beat us in the first race and it was very uncertain, so we said we cannot be defensive in the second race and had to get the best start. And that’s what we did, while New Moon had a bad start and we had the advantage at the start and were on the right shifts and in the right place all the way.”

“If you win the Gold Cup, winning the worlds seldom happens. So we said if we win the Gold Cup that’s a bad thing. It’s not very often you win both, so we are really happy to do that.”

Which was more satisfying? “It all depends on the match and the sailing and the competitors. Sometimes it’s really good to win the Gold Cup and other times it’s the Worlds.

“This time around, winning the Worlds was a greater feeling, though that’s not saying that the Gold Cup wasn’t important, because it was, being 100 years old this year, so we are very happy to come back here and do that.”

On defending their title in Australia: “In Australia, they have a lot of boats and a lot of enthusiasm, both in the Evolution and the Moderns and that’s good, and that’s why we should go to Australia and support the class in that region. I was there in 1991 sailing the worlds with my father and the sailing is fantastic, so I look forward to that.”

On the current level within the class: “This week all the good guys had a bad result and it was about trying to get a good average. All the other guys in the fleet are getting better and better. It is very professional the way they work and the way they set up the boats and do tactics. I would say from that four or five years back it’s actually been tougher to win the worlds at this point.”

In the Evolution fleet, Ku-Ring-Gai (AUS 62 John Bacon, Terry Wetton, James Mayjor) has dominated all week, as she did in last week’s Hankø Evolution Cup, and finished 11th in the overall standings. They take the Frank Tolhurst Perpetual Trophy back to Australia, where it came from, ready to be raced at Pittwater next year

Likewise in the 10-strong Classic fleet, Tara (FIN 53 Roope Juhonen, Janne Heikkilä, Pekka Honkavaara) has been consistently the best boat over the two weeks and takes the Quail Trophy, though a strong finish from Trial (FIN 4 Ville Harkke, Sami Ekblad, Pete Lindström) left them only one point behind Tara.

Trial takes The Trofeo Italia for the best Classic Boat with an attached rudder. The strong Finnish Classic fleet this week is proof the there is gaining interest and enthusiasm for racing the older boats and they certainly bring some extra beauty to the fleet, and given the right breaks have shown more than a few transoms to the newer boats this week.

It has been an interesting and pleasurable two weeks in Helsinki, sailing from the magnificent city centre location of the Nyländska Jaktklubben (NJK).

During the event, competitors experienced the hottest day in Helsinki in 175 years last Sunday, and a range of wind conditions. Though many days have had light winds, it was ironic that the prizegiving on the club lawn overlooking Helsinki was held in strong winds.

The new world champions will not be able to enjoy the fruits of their labours for as long as usual.

The next world championship is just five months away, at the Royal Prince Alfred Yacht Club, in Pittwater, Australia. Beginning with the Scandinavian Gold Cup, racing will begin on January 4, with the 2020 World Championship running from January 9-13. With a large Australian entry, and lots of visitors from around the world, it is looking like being another classic event for this iconic class.