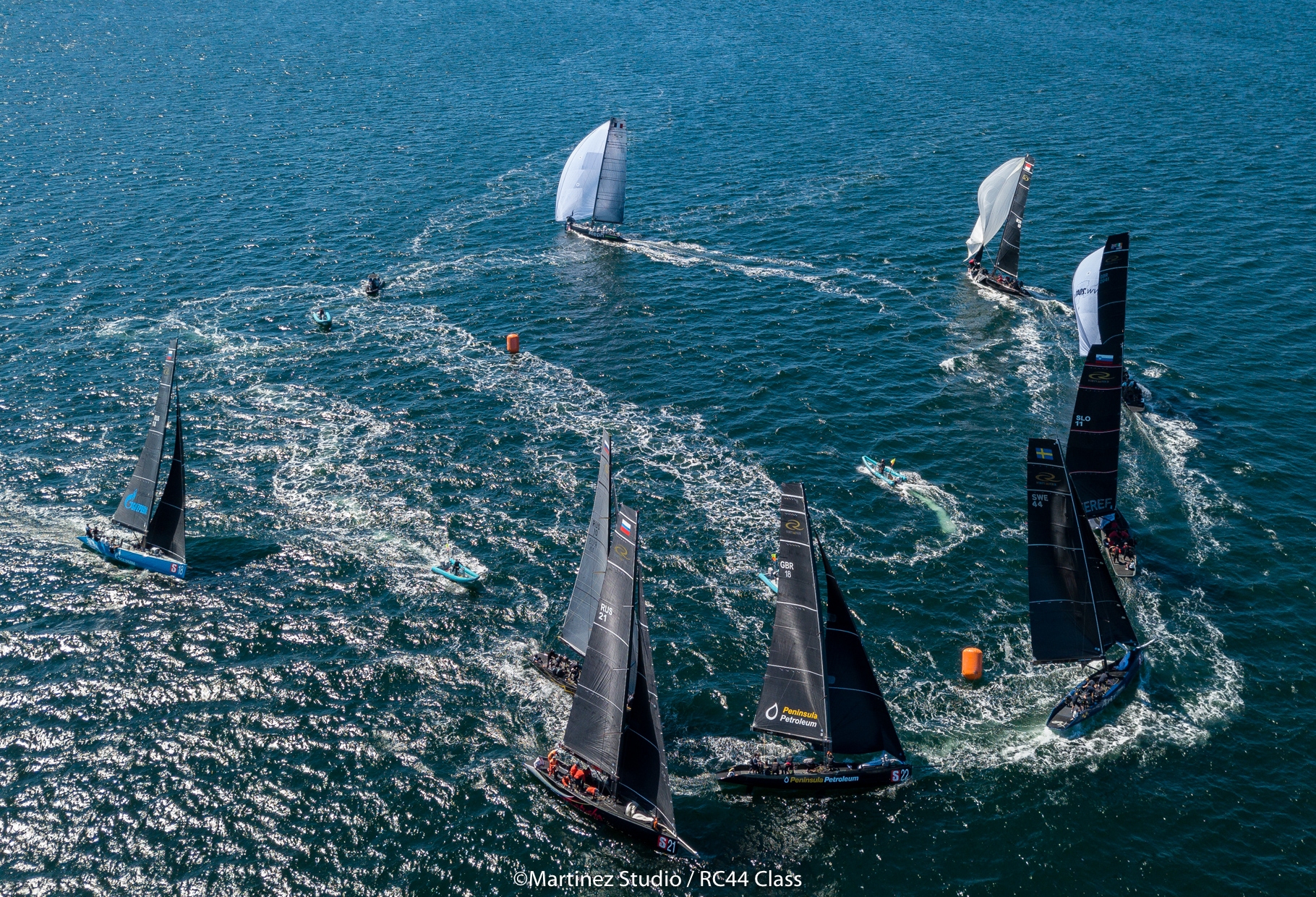 Marstrand, Sweden: Torbjorn Tornqvist and his crew on Artemis Racing continued their progressive form on a closely-fought third day at the RC44 Marstrand Cup off Sweden's west coast, moving from second place to first overall after nine races.

The dark blue-hulled, all-carbon one-design, with Tornqvist on the wheel scored a third place in the first race of the day – heat seven of the series – then second in race eight, and recovered well to finish fifth in race nine when they briefly dropped from first to eighth at the leeward mark.

Stu Bettany, the veteran Kiwi Volvo Ocean Race and America’s Cup sailor, who is manning the pit on Artemis, said the team has got the boat moving nicely on all points of sail.

“We are pretty happy – the boat is going well and we feel very comfortable with our speed upwind. And downwind it’s good, so we’ve got back into the mix. It’s great racing in this class – everyone is so close – it’s good fun,” he said.

Bettany emphasized that the game plan for the last day is to keep going consistently and avoid mistakes.

“You can’t always win,” he said, “but as long as you can be in the top three or four in each race then you are going to end up at the top of the leaderboard. So that’s what we are looking at – just keeping it clean and no penalties and things like that.”

Artemis now leads the overall rankings on 37 points and by two points from Nico Poons’ crew on the much-improved Charisma, which jumped four places from sixth to second with the best overall performance of the day. They scored a win in race seven, were fifth in race eight and were second in race nine.

Poons is having a lot of fun during a regatta which saw his crew start with four indifferent races, before going on a run of excellent form ever since.

“It’s going well,” he conceded, “but there is another day to go – let’s wait until tomorrow before we jump ahead of ourselves.”

Poons quipped that Tornqvist was not being a very good host by surging to the top of the leaderboard on the waters of his native Sweden. “I think it’s very impolite of our host,” said Poons with twinkle in his eye.

In third place, another two points behind Poons’ crew, is Bronenosec Sailing Team jointly skippered this week by Vladimir Liubomirov and Kirill Frolov. Then comes their fellow Russian Vladimir Prosikhin on Team Nika in fourth place. Meanwhile Igor Lah’s CEEREF – which led after the first day and won today’s final race – is now in fifth place.

Cameron Dunn, the tactician on Bronenosec Sailing Team, says the boat has been flying downwind which has enabled the crew to finish some otherwise mediocre races in good positions. “We’re not necessarily sure why, but we feel like we are going pretty fast downwind in general,” he said.

Dunn added that he believes winning this regatta is definitely on for the Russian team, but he and his teammates will not be thinking about that until the start of tomorrow’s final race.

“Tomorrow we will just go and do our own thing – nothing different,” he said. “We will worry about (trying to win) with a race to go.

“Four points is definitely doable but we could also finish sixth. It is always like that in this fleet – it always comes down to the last race – so our goal is to make sure that going into the last one, we still have a chance and don’t do anything stupid in the first two races.”

Currently in sixth place overall is Englishman Chris Bake’s crew on Team Aqua which is one of only two boats – alongside Charisma – to have won two races. But it has been a bit up and down for Bake whose crew this week includes, for the first time, his 19-year-old daughter, Grace.

“Conditions have been hugely shifty, so it’s either feast or famine out there and probably I haven’t been as consistent as I need to be,” said Bake who has been loving racing out of Marstrand in such superb weather.

“This is phenomenal – it is so great,” he said on the dockside in Marstrand harbour. “It also helps when you are sailing sober. Yesterday was a bit sketchy after a very intense owner’s dinner on Thursday night.”