Flavio Marazzi and his Armin Strom Sailing Team crew came out all guns blazing today to claim first place in the GC32 foiling catamaran class at the inaugural edition of Marseille One Design.

A light forecast didn’t look promising for the fourth and final day’s racing on Marseille’s Roucas Blanc, but the breeze filled in and built to around 15 knots at lunch time and the race committee was able to squeeze in four races before the final cut off of 15:00 local time.

For the first time in this regatta, the sea breeze today was from the southwest, blowing into the bay and surprisingly was more volatile than on previous days, very shifty and ranging in strength from 5-15 knots. As a result much came down to the tactical calls and there was more tacking and gybing and splits to opposite sides of the race course. This made for an exciting day with plenty of lead changes and close calls. It was also challenging for the crews with their boats at times fully powered up and foiling, or, at others, coming off the foils and ‘low riding’ when the wind dropped.

“This is the first official GC32 event that we have won,” enthused Marazzi. “I hope we can win more next year with 10 more boats on the race course.” 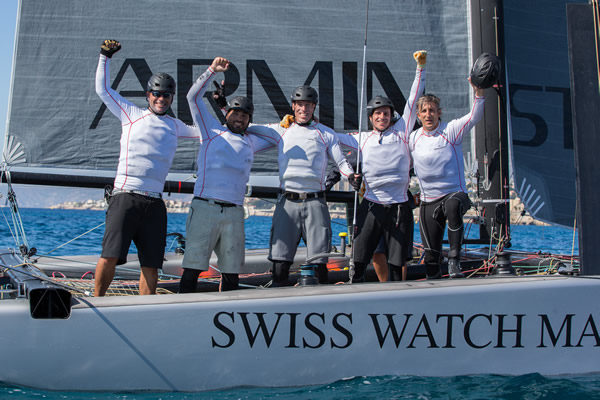 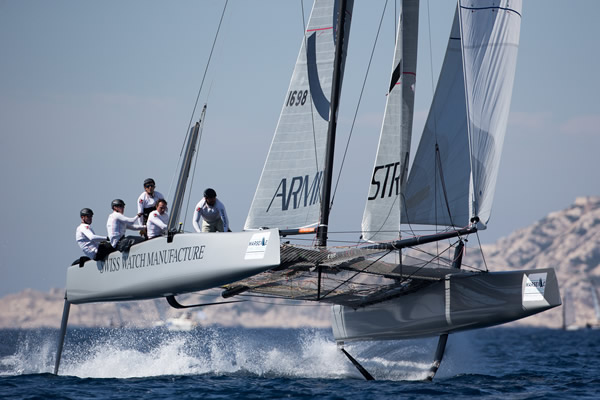 Marazzi, formerly an Olympic Star sailor, said that his team’s strength today was improved starting: “We went out there to win more races and to make our life easier and not to get into trouble. We tried to focus on speed upwind and to change the trim a little bit: We are the heaviest team, so it is important to move your weight around.”

Despite this being his first ever regatta on the foiling GC32, Sebastien Rogues and his GDF Suez crew would have won Marseille One Design had it not been for a rudder breakage on the opening day that forced them to count two ‘DNSes’ in their scoreline.

“It was not so bad today,” said Rogues. “We knew it was going to be difficult to recover six points on Flavio.”

While he now returns his attention to the Class40 and the prospect of winning this November’s Route du Rhum singlehanded transatlantic race for which he is favourite, Rogues is confident he will be back to campaign his GC32 next season. “It is just an amazing boat,” he said. “Plus I love the spirit of this class and the boat has a lot of beautiful years ahead of it.”

Tactician on board GDF Suez for this regatta was two time America’s Cup helmsman Sebastien Col, who felt he had had his work cut out today: “The wind was really unstable strength-wise. I think Flavio’s team is more used to the boat and they can change modes faster. The GC32 is really different between 8 and 12 knots of wind speed, so you have to change gears quickly as a team, and that requires good coordination and knowledge. However we gave it our best, which was most important.”

Col added that they hadn’t been starting well today, while in this respect Armin Strom Sailing Team had simply out gunned them. “We enjoyed it and we proved that as a team we can have good results in the future, so we are happy,” concluded Col. 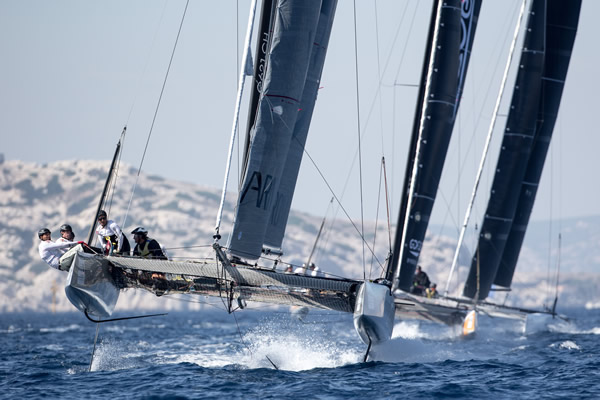 Following an injury he sustained on Thursday that has made walking difficult for him over the last two days, GC32 creator Laurent Lenne, was back racing today, taking over the helm of Magic Marine at the last minute from former A-Class Catamaran World Champion Mischa Heemskerk.

Lenne explained: “Mischa injured himself five minutes before we went sailing. So we took it on with a new crew. We finished last, but we were very close and the last race we almost won. We made a small coordination mistake between the crew, otherwise we could have nailed that one.”

As creator the GC32 foiling catamaran, Lenne said he was pleased with how Marseille One Design had gone. This event is being supported by the city of Marseille in the build-up to it becoming European Capital of Sport in 2017.

“We got a lot of national publicity for Marseille here,” Lenne continued. “And we’ve sold some boats! If I’m conservative – I think we’ll have ten boats here next year. I think everyone enjoyed the place. It is beautiful, good wind, good landscape, good food….and rosé! Having ten boats here is going to be awesome!”

While Marseille One Design concludes the racing season for the GC32s in 2014, Lenne intends to take his boat to Miami to train over the winter, where he will be joined by a new American GC32 owner, and possibly by others.

Meanwhile this inaugural Marseille One Design has been deemed to be a success by its competitors not just in the GC32 class but also those racing the new Diem 24 trimarans and foiling Moths. The event looks set to take place annually from now and is set to form part of the GC32's 2015 calendar, which is due to be announced imminently.