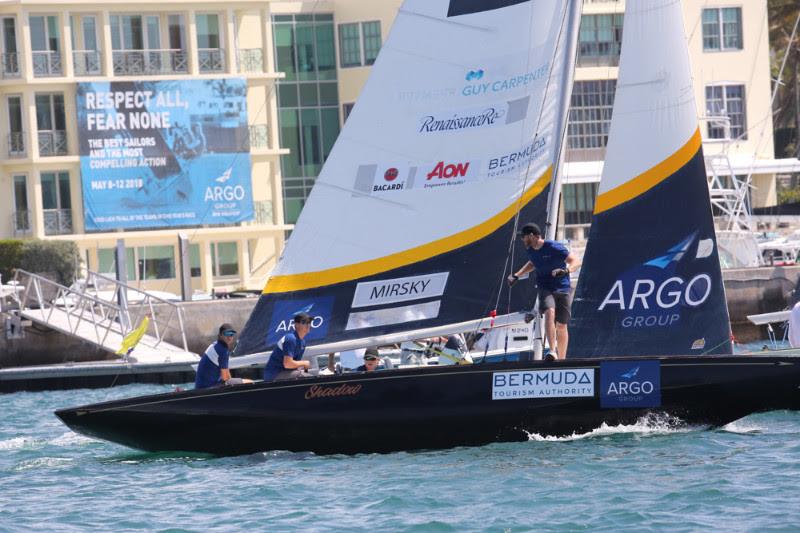 Hamilton Harbour produced a south/south-westerly breeze between 8 and 13-14 knots; slightly more stable in direction than the first three days, but the strength still varied greatly.

In the IOD sloops, a 2-knot wind speed difference can mean a difference of 10 degrees or greater in heading.

Canfield was able to pin penalties on Botticini in Flights 1 and 3, which helped his cause. Berntsson was hardly threatened in his match against Lalumiere. Mirsky played the right side of each race and had to come from behind to win Flight 3 after being on the course side at the starting signal.

As the leader of the regatta, Canfield earned the right to choose his opponent for the semi-finals and he chose Macgregor. That decision forces a match between Berntsson and Mirsky in the other semi-final.

The first warning signal of the semi-finals is scheduled for 1330 hours. The winner of each match will be the first to score three points. The race committee still intends to start the final and petit final after the conclusion of the semi-finals.

Daily Briefing: Friday May 11
With a slate of racing that calls for the completion of the quarterfinals and semi-finals and the beginning of the final and petite final, it’s frantic Friday at the Argo Group Gold Cup.

Today’s weather calls for south/south-westerly winds of 12 to 18 knots and building to 15 to 20 knots through the day as a cold front to the northwest slowly pushes through. The front brings with it showers and a chance of thunder through the afternoon.

Today’s ambitious schedule is necessary because light and variable winds are predicted for the weekend after the passage of the frontal system.

The winner of each match will be the first to score three points.