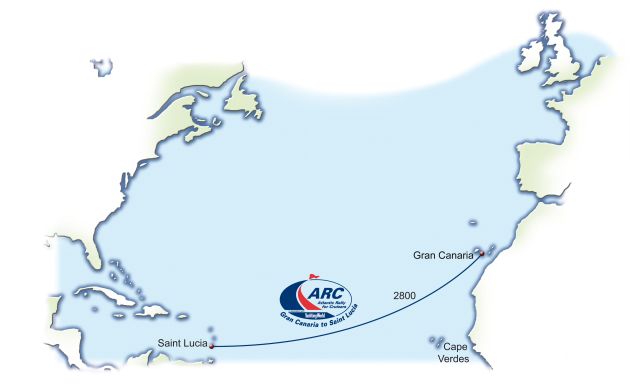 09/09/2019
World Cruising Club is delighted to reveal the twelve crew members who have been selected to sail on board the ARC Youth Team yacht as part of the 2019 Atlantic Rally for Cruisers. The initiative brings together ambitious young people from Gran Canaria, Saint Lucia and the UK to sail across the Atlantic on board a Tall Ships Youth Trust 72 foot Challenger yacht, supported by a professional skipper and mate and experienced watchleaders.
It will be a once-in-a-lifetime opportunity for the youth of today to develop their essential life skills for tomorrow.
Funding for the initiative has been raised from benefactors in Gran Canaria and Saint Lucia with a philanthropic interest in supporting these young people enhance their skills. ARC organisers World Cruising Club are financially supporting two of the selected crew as well as coordinating the planning and logistics of the project. Tall Ships Youth Trust, the UK's oldest sail-training charity, are specialists in bringing young people together for a unique, physically and mentally challenging residential experience on an ocean sailing vessel and professional skipper Gary Rutherford has sailed with the past three editions of the ARC so the Youth Team crew are in experienced hands.
“We are incredibly excited to be part of this project,” says Tall Ships CEO Richard Leaman-Grey. “Tall Ships have been taking part in the ARC for over 10 years but we have never entered such a young crew. This will be a really challenging voyage for our young people, but will undoubtedly be an unforgettable life-changing experience for all on board. This is exactly what the Tall Ships Youth Trust are all about.”
The ARC Youth Team will gather in Gran Canaria from the 16 November for a week of sail training and safety guidance before they embark on the 2,700nm sail to the Caribbean. They will join the spectacular ARC 2019 start from Las Palmas on Sunday, 24 November, alongside around 200 other yachts from over 30 different nationalities who come together to cross the Atlantic as part of world's largest trans-ocean sailing event.
The ARC Youth Team will sail as part of the Racing Division, a competitive class in the ARC, where no engines are allowed and they will be at the will of the weather for the 2,700nm crossing. Sailing the boat 24 hours a day, the crew will work together to cover all aspects of life on board including steering, sail changes, cooking and cleaning duties.
The voyage is anticipated to take 13 to 18 days to reach the shores of Saint Lucia, where a remarkable welcome will await these young sailors as they revel in achieving a truly lifechanging experience.
The ARC Youth Team Crew

From Gran Canaria, four candidates have been selected for the ARC Youth Team. Aged 19, Ada Garcia-Ferrandez Saavedra is relatively new to sailing but has a great passion for the sea and always dreamed of spending time on board a yacht on the open ocean. She has been chosen to benefit from one of World Cruising Club's funded places, bringing a great deal of enthusiasm as she seeks to improve her sailing skills through this experience.
At 30 years old, Ariana Lorenzo Zambrero is the oldest of the crew members and already working in the marine industry in the Machinery & Maintenance department at the Astican shipyard in Las Palmas. Astican are a major part of the commercial port activities in Gran Canaria and Tenerife, and are sponsoring Ariana's place on board the ARC Youth Team yacht.
José Carlos Álvarez, Managing Director of Astican, explained his support of her participation, “As well as strengthening the connections between Saint Lucia and the Canary Islands, the ARC Youth Team challenge will serve to benefit the maritime industries as a whole, as well as amplifying the love for sailing and entrepreneurship in our local communities. The values and objectives of the ARC Youth Team align perfectly with Astican's own vision, social responsibilities, and commitments.”
Michele Garcia aged 24 and Enrique Diez Fernandez, 22, are at the start of their careers in marketing and finance respectively. They are both passionate travellers, and hope to gain vital team building skills from the adventure of sailing with the ARC Youth Team.
Michele's place onboard the yacht is supported by a group of businesses based in Las Palmas Marina, Rolnautic, Alisios Rigging, Distrimar, and Embarcadero Restaurant, who have all been long-term supporters of the ARC's annual start in the city. Peninsular Yacht Services, a subsidiary company of the Las Palmas based global company Peninsular Petroleum will be sponsoring Enrique in pursuit of his “bucket list” dream to sail the Atlantic.

Applications to sail with the ARC Youth Team were also received from two young candidates from the UK. About to start their gap years between High School and University, Hugo O'Kelly and Lucas Pritchard-Jones are both 18 and will be fundraising their own sponsorship to join the crew. Both bring sailing experience having completed their RYA Day Skipper qualifications which will be an asset to the team.

At the upcoming Southampton Boat Show in September, Lucas and Hugo will be the first members of the ARC Youth Team to climb onboard the Tall Ships Youth Trust Challenger 72 that will be taking them across the Atlantic. A 90 minute sail will give them a taste of what's in store for their adventure with the ARC.

2019 is a special year for the ARC's arrival in Saint Lucia as the island celebrates the 40th anniversary of the nation's independence and the 30th consecutive year that the rally has arrived in Rodney Bay. Six lucky Saint Lucians have been selected to join the ARC Youth Team and be great ambassadors for the Caribbean island. Each hopes to bring their experiences from sailing with the ARC back to their daily lives on the island, benefiting the marine and tourism community in Saint Lucia.

Keen supporters giving them guidance on this goal are Jus' Sail, Saint Lucia's top rated day sailing charter company and the home of the Jus' Sail Youth Training Programme. They contribute to building the next generation of Saint Lucian sailors by offering training, certification and employment opportunities within the marine industry to disadvantaged local youth during the off season period. Jus' Sail have been fundamental in ensuring the success of the ARC Youth Team project in Saint Lucia, having helped to secure sponsors, find suitable crew, and assist with sail training of some of the successful applicants.
Adonai Modeste is the youngest Saint Lucian on the ARC Youth Team aged 19. He is an avid sailor with the St. Lucia Yacht Club where he heard about the ARC opportunity and will be supported by the SLYC and IGY Rodney Bay Marina encouraging his future dreams of becoming a charter boat captain. He has already represented his country at sailing regattas around the Caribbean and Europe and will no doubt bring a competitive outlook to the team as he takes part in his longest race to date!
“This opportunity is a very big one that could be a life changer in terms of the sailing industry for me as a person,” says Adonai. “I am quite anxious about the trip, but I can't wait to set sail. I am most looking forward to the good memories and friendships that will be developed with my ship mates.”
Also looking to enhance his future career in the marine industry, Neil Melius earned his sea-legs as a fisherman but now set his sights on better serving the visiting yachts of Soufriere and learning to sail. At 26, he is currently training with the Jus'Sail programme and is President of the newly formed Soufriere Yacht Service Association. He is hoping to gain a broad insight into the international sailing community and utilise this to improve the general service and experience for visiting yachts to Soufriere and the island of Saint Lucia. World Cruising Club selected Neil to benefit from their sponsorship as an ambitious individual with a great long-term vision for nautical tourism in the Caribbean.
Representing the ladies of Saint Lucia are two special female sailors joining the ARC Youth Team. Krishna Joseph, aged 21 from the village of Anse La Raye dreams to be the first female skipper in Saint Lucia, and she will be sponsored by long-term ARC supporters Spinnakers Restaurant.
The Richings family, owners of the Reduit Beach hangout, have sailed in the ARC themselves, and recognise what an opportunity this will be for Krishna. “We are sure that Krishna will not only enjoy her experience but also we hope this opportunity will help her to develop her career and we wish her the very best,” says Spinnakers' owner Michael Richings. “We chose to sponsor Krishna for the ARC Youth Team because we wanted to support the idea of having more professional lady sailors from St.Lucia, and we really admire her ambition to be the country's first female skipper.”
Gabie Chreiki takes part to further her passion for travel and hopes of working as a stewardess on luxury yachts in the future. Her father Mars, who is financing her place through the family business Taxi sportswear, says, “Gabie decided that she did not want to be involved with the business as she prefers to be outdoors and active. I wanted to help her fulfil her dream which is why I decided to sponsor her place on the ARC Youth Team. We love the concept and I know she will gain so much from this great life experience!”
20 year old Tyrus Antoine admits to being a 'bit anxious about this once in a lifetime opportunity.' He has not had much sailing experience, but recognises how life-changing this experience could be for him having never travelled before. To gain some basic knowledge, he's enrolled in the Jus'Sail training programme and an anonymous supporter in Saint Lucia will be funding Tyrus' place is enabling this unbelievable opportunity for him.
The final crew member from Saint Lucia is Crisanki Flood, the youngest member of the watersports team at BodyHoliday Saint Lucia resort. Aged 21, he was chosen for the ARC Youth Team to expand his skills and knowledge for a future in the marine tourism industry.
“We are delighted to be able to provide Chrisanki with this amazing opportunity,” says, Rebecca Platt, Sales & Marketing Director at BodyHoliday. “We are sure that he will be a great asset to the ARC youth team.”