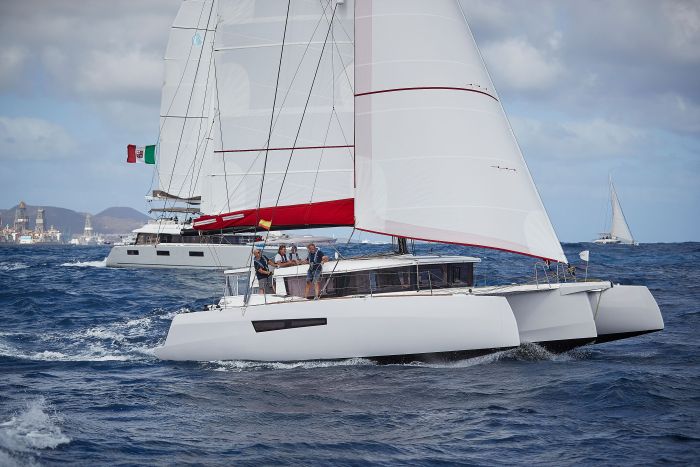 05/12/2019
At just after 2:30pm local time yesterday (03 December, 2019) the Neel 47 trimaran Minimole crossed the ARC+ Finish Line in Rodney Bay Saint Lucia, claiming line honours and leading the arrival of the 2019 rally into Rodney Bay – the first of close to 300 boats sailing with the ARC this year.
The six crew of the performance cruiser owned by Italian businessman Aldo Fumagalli and skippered by Marco Corno includes Golden Globe Race veteran Philip Phelipon and they received a rapturous welcome as they reached the docks of IGY Rodney Bay Marina. As their lines were made fast on the dock, the Events Saint Lucia team were delighted to provide the crew with a glass of ice-cold Saint Lucian style rum punch as the steel pan band struck up a special musical welcome.
Minimole's elapsed time of 12d 5h 2m 42s falls outside of the 2018 ARC+ rally record, but it is a remarkable achievement for a yacht that was launched less than three months ago. The ARC+ fleet has experienced good trade wind conditions since leaving Mindelo in Cape Verde, with the final run towards Saint Lucia seeing perfect easterly breezes of 15-18kts.
After stepping ashore, Minimole skipper, Marco Corno, explained “we had a fantastic trip with really fantastic weather. After 50NM out we took a big advantage and then we hit a slow zone and everyone was catching us up but we managed in the last 2 days to make it up. I am a bit surprised to be first. This is the first time for us and it's a fantastic dream.”
At one point it looked like it was to be a photo finish for the first arrival to cross the ARC+ finish line with an eclectic collection of front runners jostling to reach the rum punch first after the 2150NM crossing from Mindelo. Split between the rhumb line route, and ducking south into the steadier trades, the triumphant trimaran had been up against the big boys of Sunbird a CNB Bordeaux 60, Stadtship 54 Aluaka featuring a fellow countrymen from Italy on board and plucky Pogo 36 Amarys with a competitive crew on board the French flagged pocket cruiser-racer. In fact Minimole's will not be lonely for long in IGY Rodney Bay Marina with a further fifteen yachts set to arrive within 24 hours.
The first arrival is a special moment as it officially kicks off what will now be a month-long celebration in Rodney Bay, Saint Lucia. With 71 yachts in the ARC+ fleet and 191 on the traditional ARC route all set to receive a magnificent welcome, some 1,500 sailors will come ashore to enjoy the island paradise greeted by friends and family. An organised programme of tours and social events facilitated by World Cruising Club and the Saint Lucia Tourism Authority will provide a great taste of what Saint Lucia has to offer, with the finale of the ARC concluding with the final Prizegiving Ceremony on Saturday 21 December.