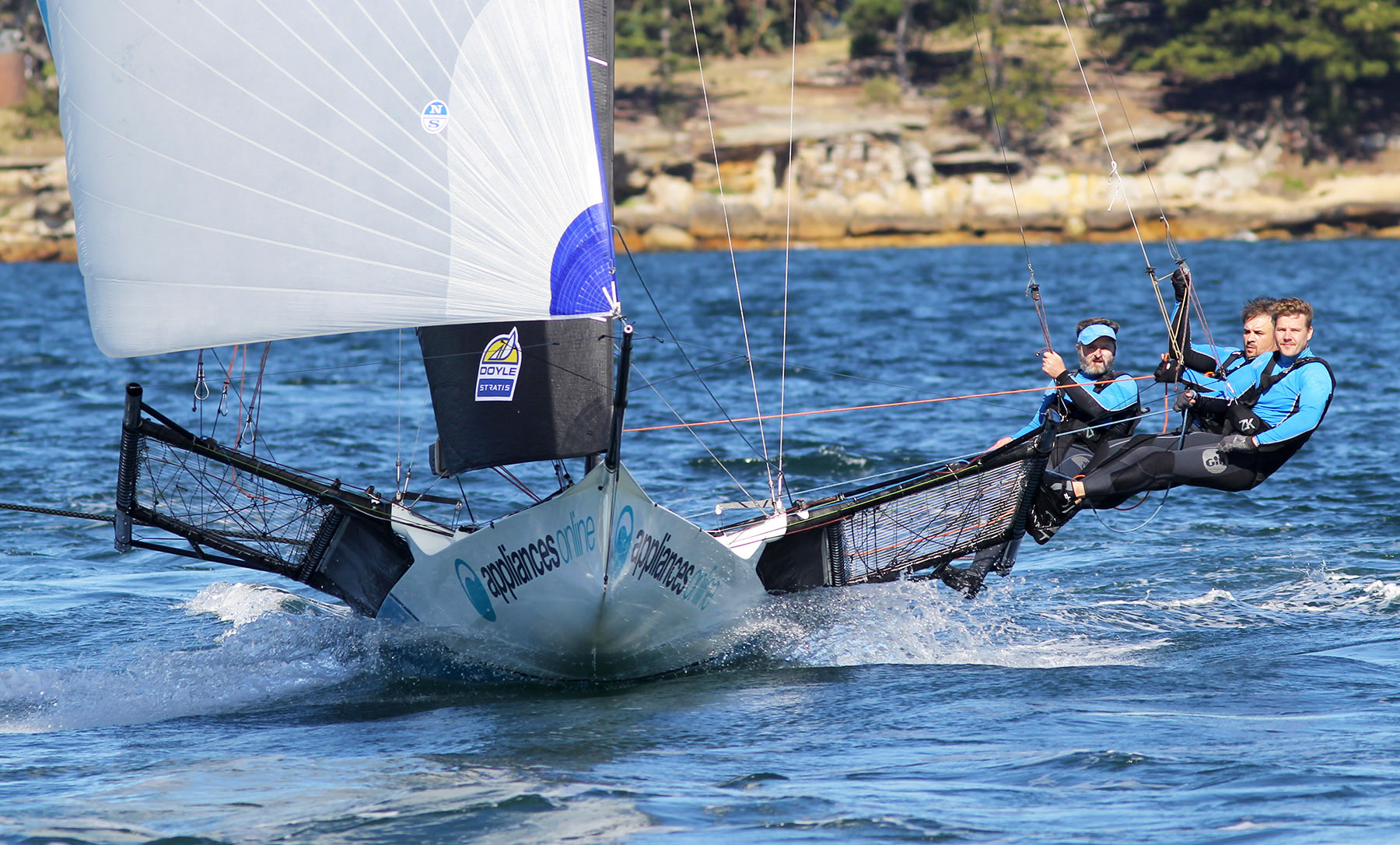 The dominant Appliancesonline team make it look too easy as they race down the spinnaker run in Race 6. Photo 8 Footers League.

The Appliancesonline.com.au team of Brett Van Munster, Phil Marshall and Kurt Fatouris only have to appear at the starting line next Sunday to take of the Australian 18 Footers League's 2019-2020 Spring Championship after a totally dominant performance in both races sailed on Sydney Harbour today.

In Race 5 of the championship, the Appliancesonline team won by 2m22s, then backed it up by also taking out Race 6 by 1m34s. The team's points total, with only next Sunday's race of the championship to be sailed in the series, is 18 points, which is a staggering 17 points clear of the equal second placed The Oaks Double Bay-4 Pines (Aron Everett, Tom Clout, Charlie Gundy) and Finport Finance (Keagan York, Matt Stenta, Angus Williams) on 35. Noakesailing (Sean Langman) is fourth on 39 points, followed by Yandoo (John Winning) on 47, with Dal Zotto (Jack Sprague) and Rag & Famish Hotel, both on 48.

With the breeze 10-12 knots from the ESE, Appliancesonline.com.au quickly led the fleet on the windward leg to the windward marks in Rose Bay. Dal Zotto continued her good form over recent weeks to be in second place, followed by The Kitchen Maker-Caesarstone (Jordan Girdis) and Yandoo, which was sailed by replacement skipper on the day, Harry West.

The AOL boat speed was incredible in the conditions and the team soon opened up a break over the fleet on the long spinnaker run back to the bottom mark at the end of the first lap of the 2-lap windward-leeward course. The Kitchen Maker-Caesarstone and Dal Zotto both retained their placings behind the leader, while Finport Finance, Rag & Famish Hotel (Bryce Edwards) and Noakes Blue (Yvette Heritage) gained to round out the keading group.

In the following Race 6, AOL's start wasn't quite as good as in the earlier race, but the boatspeed was so dominating that the team had established a 45s lead over the nearest rival, Vintec (Kirk Mitchell) as spinnakers were set for the run back to the bottom mark.

The Shaw & Partners Financial Services team continued the form from Race 5 and finished the day with a second placing, just 1S ahead of Finport Finance.

Another big improver on the day was Marcus Ashley-Jones on R Marine Pittwater, who recorded fifth and sixth placings in the two races.

The Australian 18 Footers League's 2019-2020 Season continues next Sunday when the club will stage Race 7 of the Spring Championship. The race is the last race of the Spring Championship. Spectators can see all the teams in the rigging, then follow the racing on board the spectator ferry, which leaves Double Bay Wharf, alongside the rigging area, each race day at 2pm.