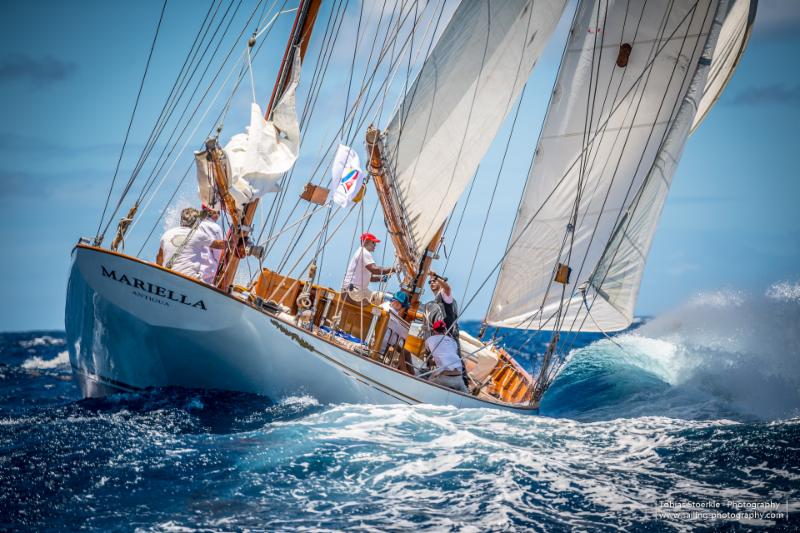 The 2019 Antigua Bermuda Race fleet set off on Wednesday 8th May off Fort Charlotte, Antigua. A perfect start saw brilliant sunshine and 20 knots trade winds combining to produce spectacular conditions for the international fleet. Close to a hundred sailors from Australia, Canada, France, Germany, Great Britain, Hong Kong, Italy, the Netherlands, Sweden, Switzerland, Russia, and the USA are taking part in the 935nm offshore race from Antigua to Bermuda.

A highly competitive start featured a yachts hugging the rugged coastline of south Antigua, making gains from the lifting pressure rolling down the cliffs. The 100ft canting keel flyer SHK Scallywag (HKG) got away to a cracking start, as did Gilles Barbot's Volvo 60 Esprit de Corps IV (CAN). At Green Island the fleet eased sheets, hoisting downwind sails and accelerating into a power reach that should last for at over 300 miles. According to weather forecasts, they are in for a spectacular treat of superb sailing on a beam reach in tropical heat, surfing through the Atlantic Ocean.

“Just perfect conditions,” enthused Les Crane, Antigua Bermuda Race Chairman. “Once again Antigua has been a spectacular venue for the start. We had a great party in Nelson's Dockyard last night hosted by Goslings Rum and Bermuda Tourism Authority.

“There is always anticipation before the start, so it is good to see them all get away to a clean start. Safety is the primary concern and all of boats have the designated safety equipment for the race, as well as satellite tracking. The Race Committee in Antigua, led by PRO Stephen Parry did a great job, and we wish all of the teams a safe and enjoyable race. A warm welcome awaits them at the Royal Bermuda Yacht Club.”

Three hours into the race all of the yachts were hitting double-digit speed, blasting through two-metre waves in 29 degrees air temperature. Sun glasses on, lapping up the sunshine and relishing the prospect of a first night at sea under a carpet of stars.

Supermaxi SHK Scallywag skippered by David Witt (AUS) passed Barbuda to starboard, covering over 50 miles in the first three hours. Afansay Isaev's Maxi Weddell (RUS), and Esprit de Corps IV (CAN) split paths to round different sides of Barbuda and were 20 miles behind the leader. On corrected time, Lombard 46 Pata Negra (GBR) was the early leader in the IRC Division and Carlo Falcone's 1938 yawl Mariella was going well in the CSA Class.

“We are racing and that's an Open 40 behind us!” commented Meg Reilly (USA), co-skipper on Pogo 12.50 Hermes. “We have just finished the upwind leg around Antigua and have cracked off towards Bermuda. That was easy!!”

All of the teams racing in the 2019 Antigua Bermuda Race are expected to pass Barbuda before dusk; the next land they will see is likely to be Gibbs Hill Lighthouse Bermuda, after close to 1,000 miles of Atlantic Ocean Racing.

All yachts are fitted with YB Trackers. Follow the front runners, an individual boat or the whole fleet via the website at: http://yb.tl/a2b2019