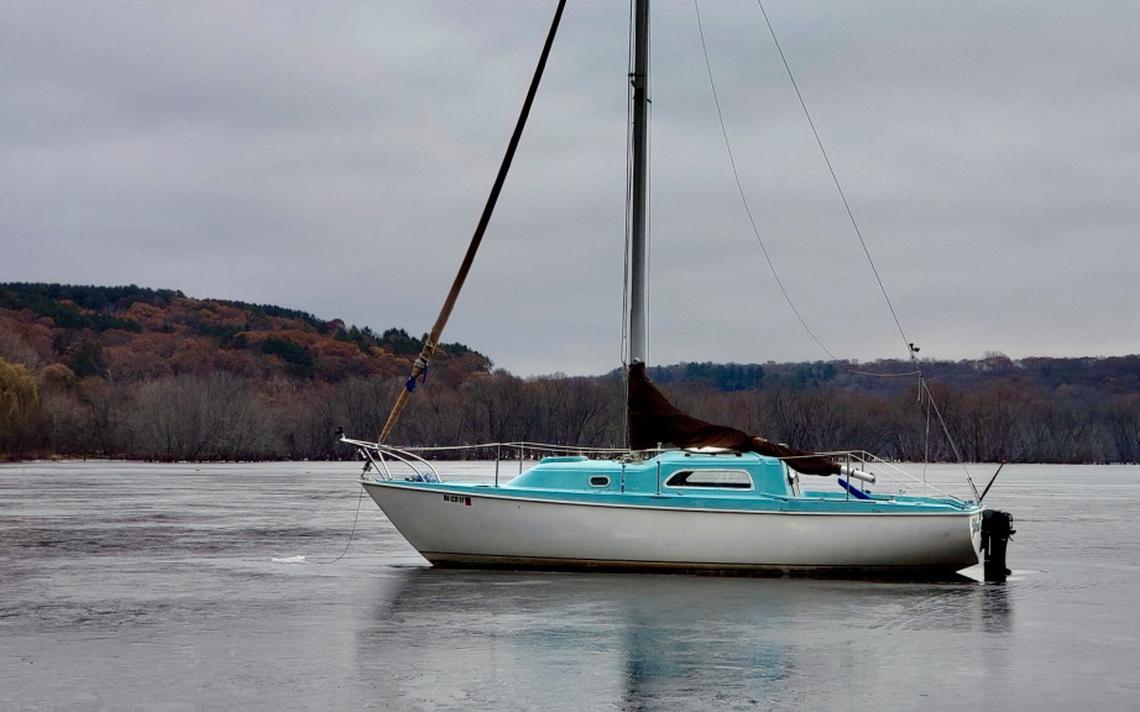 This sailboat is in danger of becoming locked into the frozen St. Croix River at the Boom Site Landing north of Stillwater. Greg Seitz via Twitter.

While Australia swelters in heatwave conditions, in northern states of the USA things are very different, as The Bemidji Pioneer reports:

STILLWATER, Minn. — Mike Olson wants everyone to know that that sailboat frozen in the St. Croix River this winter isn’t his.

“It definitely isn’t,” he said Wednesday afternoon, Dec. 2, from his house in Chisago City. “Mine is sitting out in my garage right now.”

But it’s definitely a strange coincidence that another sailboat is stuck in the river near the Boom Site Landing north of Stillwater.

Greg Seitz, the founder of the St. Croix 360 website, has been tracking the boat’s progress for the past month or so. He drives past the site a few times a week.

“It’s frozen in there now,” Seitz said. “It’s thin ice, so I don’t think you could get out to it in the first place to get it out — unless you have an icebreaker or something.”

At 3 p.m. Wednesday, Seitz shared a photo of the boat on Twitter. “I don’t know who wants to hear this, but … there’s another sailboat frozen in the St. Croix River ice near the Boom Site,” he wrote.

“There’s open water to about 10 feet from the boat,” Jacobson said. “It should still be movable at this point. I don’t believe that there is that much ice on the river that we wouldn’t be able to move it.”

He planned to have deputies check on the boat again Thursday and contact the owner to “see what their plan is as far as getting it out before it gets completely blocked in.”

The boat, about 25 feet long and named Gilead, is anchored in the river. It has the required 360-degree white navigation light in place, Jacobson said.

Minnesota does not have a formal program for addressing abandoned or derelict watercraft. If a boat sinks, however, and is not removed within 30 days, the owner is subject to a civil penalty of two to five times the cost to remove, process and dispose of it.

Leaving a boat in the water during a frozen Minnesota winter can carry numerous risks. Among them: a fiberglass hull can succumb to the intense pressures of expanding, shifting and heaving ice. Essentially, the boat can get destroyed or sunk.

“It’s just like with docks,” Jacobson said. “If you leave something frozen in the water, it could damage and potentially sink the vessel. That’s why we want to get it out of there.”

Last November, Olson made the news after his 26-foot white-and-blue fiberglass 1977 Pearson sailboat froze in the river. He and an ex-fiancee had bought the boat and a small dinghy for $1,500 in September after responding to a Facebook ad. Unfortunately, a boat trailer wasn’t included.

The boat ended up frozen in the river for almost a month before two good Samaritans, Brennen Swanson and William Gavic, took pity on Olson. The men took the day off work to tow the sailboat to the Boomsite Marina in Stillwater.

As for having two boats frozen in the same place in the St. Croix just a year apart, Jacobson agreed it was a strange coincidence.

Here at Mysailing, we're not sure if it is the same boat, and someone is telling porkies, or if the media outlet just used the file pic of the first boat to illustrate their story. Check them out – it's the same boat in both pics.

Read the story about the first boat that got stuck and check out the picture.