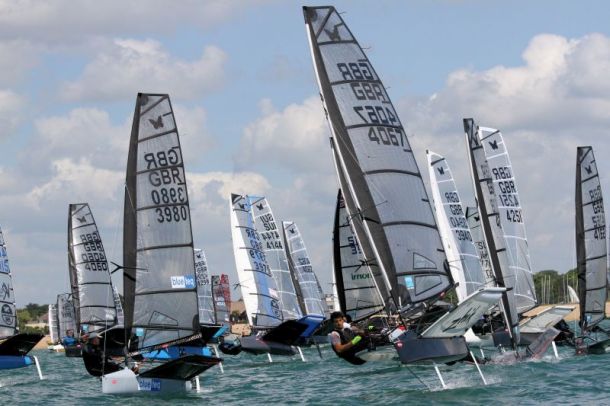 While the rest of the Solent was filled with yachts going around the Isle of Wight, the International Moth fleet were enjoying Stokes Bay at its very best. Four fantastic races were held in cracking conditions.

Chris Rashley continued his extraordinary run with four more bullets to repeat his perfect scoreline from yesterday. Today though was less straightforward as Chris explained, “It was a tougher day for me, I didn't get off the line quite as cleanly as I did yesterday and I made a couple of mistakes on the starts which put me back a little bit but I fought back through, so today was a much tougher day for me, but I think I sailed better today than yesterday.”

On where he made his gains Chris said, “I've been working hard on downwind and I'm definitely the pace-setter, there's no doubt about that, and it's making my life easier for the next beat.”

On his tactics for the final day Chris continued, “I only need one race out of three but I want to win all the races. I lost the first race of the regatta so I'm a bit disappointed about that, I came here wanting to win every race, so I definitely want to win the rest.”

The big mover in the fleet has been Ben Paton, who is now up to second overall after early gear failure during the event. Ben had some close battles with his closest competitors, resulting in yet another photo-finish with Mike Lennon in the first race of the day and then some tight moments with Dylan Fletcher around the course.

Dylan had a better day after sorting some of the teething problems with leaks in his solid-winged Moth, “She's still presenting a few issues so I'm going to have another go this evening. It wasn't quite as bad as yesterday but it still made life quite hard out there. The goal for this boat was the Europeans and we really wanted to bring it out for the nationals. It was ready but we didn't have any time to fix anything or get the boat polished for here, so although it may be a bit frustrating out there, sometimes feeling like there's more potential left in it, it's good to be finding the little problems to change for next time.”

On getting used to the new platform Dylan said, “It feels fine now and I'm getting pretty used to it. I had my rig raked back a little bit today which made my life quite hard gybing, but other than that I'm really happy with it. My aim tomorrow is to try and win some races to try and maximise the potential of the boat.”

There's been a fair amount of chat on sailing forums worldwide about the solid wings on Dylan's Moth so we asked him where he thinks the future lies. He replied, “Right now I think the future's solid, but I think it'll be interesting to see who comes up with a soft-winged version. I think there will be plenty of people having a go at maybe changing their wing angles or aero fairings, but I guess for now I'm saying solid.”

The strength in depth in the International Moth fleet is extraordinary. Former Musto Skiff World Champion Dan Henderson, who's sitting just inside the top ten at this event said, “My day started off pretty solid, I rounded the top mark 4th in the first race only to tip it in on the finish line where I lost 2 or 3 places. In the second race I rounded the windward mark 4th again but tried to stay out in the chop and just got nailed, rounded the leeward mark in about 10th but I pulled my way back to around 7th.”

On the racing today Dan said, “Glamour conditions, you couldn't really ask for much more apart from getting a load of boats going around the island out of the way!”

The general improvement in the fleet was backed by Ollie Holden, who was 23rd in the 2014 Worlds at Hayling Island and is currently lying 19th in this championship. Ollie said, “I don't think I'm sailing too badly, I just think everyone else is sailing extremely well. A couple of years ago I don't think you would have had more than about 10 boats finishing in conditions like that with the waves. Even with it not being particularly windy, the top mark was fairly rough, so that was quite interesting. There are a few people spending a lot of time in their boats, the boats themselves are becoming more forgiving and people are people are getting a bit more used to what setup they should be using.”

It will take catastrophic gear failure or an utter disaster of a day for Chris Rashley not to win the 2015 Nationals trophy, but with just six points separating the next five the battle for second overall is definitely on. Watch this space to find how it all unfolds.