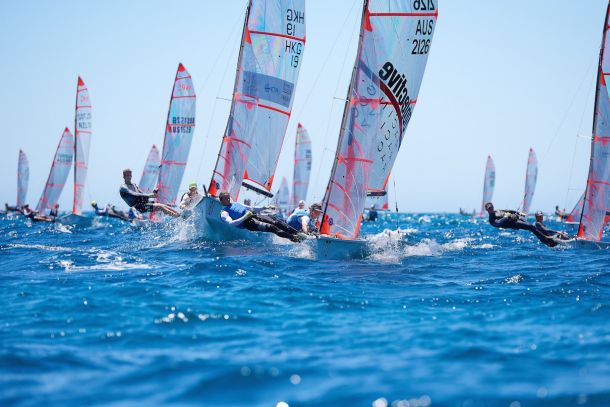 The 2015 Australian Youth Championships have reached their final stages and racing on today’s (Friday, 9 Jan) penultimate day saw fierce battles for the top spots on the leader board. The ‘Fremantle Doctor’ stayed away again and conditions remained tricky and shifty. Saturday will be the final Youth Championships race day with two races scheduled across all fleets.

One of the closest battles to watch on the final day will be in the 29er fleet after New South Welshmen Kurt Hansen and Jim Colley regained the top spot and are now tight on points with Thursday’s leaders Kyle O’Connell and Tommy Siganto (QLD).

The recent national champions scored two bullets and a second place in Friday’s three races and 2014 29er World Champion Kurt Hansen made his ambitions clear that they are aiming for the win:

“Yesterday didn’t go so well for us, but we realised we had a bit of a job to do today and make it count. So we put out three really good races in some tricky conditions and are now on equal points going into tomorrow and it should be a great day. I’ve missed out on the Youth Worlds last year to Jim, so the ambition is there to make it this year and winning this event is another step to get there.”

And new crew 2014 Australian Sailing Youth Team’s Jim Colley added: “We get another drop tomorrow which should make it interesting, so all we have to do is beat them (O’Connell/Siganto) in both races. I know, it’s easy to say and hard to do, but our aim is definitely to win this regatta.”

“We’ve been leading since yesterday and we’re pretty happy with our regatta so far, said crew Xavier Winston-Smith after racing. “We haven’t sailed any drops and have been really consistent, especially in the last five races. We’ve really been putting together everything we’ve training for and can’t complain. We were a bit disappointed with our nationals results and just wanted to come here and show what we are capable of.”

And about today’s racing his skipper Alec Brodie added: “It was really tight and good racing. The conditions were really trick and the pressure was up and down, but we just made the best of it.”

WA locals and recent 420 National Female champions Nia Jerwood and Lisa Smith moved up the ranks once again and will go into the final race day ranked overall second and top female boat. The 420 National Champions and 2014 Australian Sailing Youth have had a strong regatta and are relishing the opportunity to race in the mixed fleet on home waters in conditions, which suit them as Nia Jerwood explained:

“The ‘Freo Doctor’ has not come in so far, so it’s been good for us with some light winds and shifts. We like the tricky conditions a bit better than the heavy ones as this also means we can get the upper hand on the boys.” And crew Lisa Smith added “We had a pretty good day today and got two seconds. The conditions were tricky so we had to work hard to get there but we did it.”

There will be two more races tomorrow, but 2014 Australian Sailing Youth Team’s Jock Calvert has already locked in his third Australian Youth Champion title on points after winning the eight races in the Bic Techno 293 class in the five board fleet. No reason to get complacent though for the Tasmanian who found the conditions challenging despite being quite similar to home:

“It’s actually been pretty challenging these last couple of days with the shifty and gustiness, but it almost feels like home so it’s been nice to have similar conditions. Especially on a day like today when it’s so gusty, one person can just go out, bang the corner and get back 100m in thirty seconds so you got to be on your toes all the time.”

In the Laser Radial local and recent national champion Alistair Young consolidated his lead over Fremantle Sailing Club mate Connor Nicholas by winning the first two races of the day. With Richard Maher following in third the podium spots are in the hands of Western Australia after a total of eight races. But it is tight between third and fifth with only one point separating Maher from New South Welshmen Stuart Plenderleith in fourth and Finn Alexander following in fifth ahead of Saturday’s final two races.

2014 Australian Youth Olympics team member Elyse Ainsworth (WA) posted a strong overall seventh and fifteenth place in today’s racing and is the top ranked female Radial sailor ahead of her sister Jacinta Ainsworth after eight races. Marlena Berzins had the best final race of the day amongst the female sailors after posting a 12th place overall – a great result for the NSW sailor who only started sailing last year.

In the Laser 4.7 fleet local Zac Littlewood goes into the final race day in the lead ahead of Jordan Makin (NSW) and Caelin Winchcomb (WA) in third. WA’s Zoe Thomson is the top female Laser 4.7 and overall fourth.

In the Hobie 16 2014 Australian Sailing Youth Team member Shaun Connor and Sophie Renouf (NSW) just hold onto first place with only one point separating them from Lachlan and Ethan White (NSW) who posted another two race wins today.

Racing is scheduled to resume at 12 p.m. tomorrow, Saturday, 10 January 2015 with the final two races of the regatta.

About the 2015 Australian Youth Championships

The 2015 Australian Youth Championships see 175 U19 sailors from six states and two territories compete in six boat classes (420, 29er, Hobie 16, Laser 4.7, Laser Radial, Bic Techno 293) for the National title honours. In addition, four sailors from Japan as well as 12 from New Zealand and one Hong Kong crew are contesting the Championships. Host Western Australia has the biggest contingent at the start line with 94 sailors, followed by New South Wales (54) and Victoria (38).

The 2015 Australian Sailing Youth Championships together with the National Class Championships as well as the 2015 Queensland Youth Week in July count as a selection event for the 2015 ISAF Youth World Championships to be held in Malaysia in December 2015. See Yachting Australia Selection Policy for further details: http://www.yachting.org.au/performance/youth-sailing-team/2015-youth-team/asyt-selection-policy-2015/.