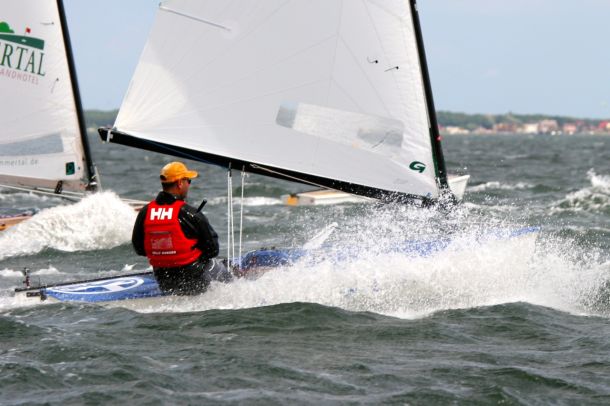 Andre Budzien (GER) has taken the lead at the OK Dinghy World Championships in Puck after two more races were sailed in an extremely shifty offshore breeze. Jørgen Svendsen (DEN) moves up to second while Charlie Cumbley (GBR) stays in third. Race wins went to Pawel Pawlaczyk (POL) and Budzien.

It was a big day in Puck. Big winds, again, a big fleet and BIG shifts. Everyone was on the wrong side of one at some point, but the racing was intense, with no let ups and no place to hide. Many of the leaders picked up some high scores in the second race, while the regatta leader couldn't repeat his perfect day of yesterday. It was a day of throwing the dice for many, and there were more than a few double sixes to be had.

Race 3 took a while to get away after some big shifts to the left meant the course had to be reset, and then a second start under black flag. It was a gruelling race for everyone with huge wind changes in both direction and speed with large black clouds coming off the land.

Pawlaczyk led around the top mark in race 3 after another left hand shift brought those on the left across the fleet. He rounded just ahead of Ricard Burton (GBR) and Jonathan Fish (GBR). While Burton has his knots right today, he forgot how to gybe and with the wind now up to 20-22 knots, both Pawlaczyk and Burton capsized at the gybe mark top let Fish lead down the reach. However Pawlaczyk found the best route on the second upwind to take the lead, which he held to the finish. Jim Hunt (GBR) came through for second with Greg Wilcox (NZL) gaining on a big right shift on the final upwind to take third.

The biggest casualty of the black flag was the regatta leader Bo Petersen (DEN), and with no discard yet in place, he drops out of the top 10.

The next race was even more tricky with a very shifty first beat and a very crowded first mark rounding. Budzien started midline with a big enough gap to windward to tack off and cross to the right. He got the first shift spot on and led the entire race. He led around the top from Pawlaczyk and Svendsen. Not much changed on the reaches but on the second upwind it started to get interesting. Budzien just managed to hold onto his lead, but a huge windshift to the left of about 60 degrees brought the middle of the course up to the top mark. Thomas Hansson-Mild (SWE) had rounded the leeward mark about 25th, and sensing the right was good, smacked the corner as the shift hit and reached into the windward mark just behind Budzien in around 16-18 knots. Only Budzien and Svendsen, in third, survived the shift, with the rest of the leading group suddenly finding themselves mid-fleet.

With the downwind realigned and the final beat again one sided, and with the wind droping to 4-5 knots, Budzien narrowly maintained his lead from a fast approaching Svendsen from the left hand corner. Hansson-Mild crossed third.

Regatta leader Budzien explain his race win. “There was this really big shift on the second beat. I was in the middle and the shift came through so I went from the middle of the course directly to the mark. Thomas was on the right but came down on a reach. I was battling Svendsen on the second beat. He was very fast and has a good nose for the shifts at the edges. I covered him at the top and just stayed ahead. The downwind marks were very hard to find and then on the third upwind Svendsen went the whole way left. He lost early on and then, as always like Svendsen does, at the right moment the shift came. And he was only three boatlengths behind me at the finish.”

On the conditions so far, “It's lake conditions, like Schwerin at home. It's shifty, tricky, and sometimes like gambling. You put some risk in, but just a bit. And that makes it really difficult. Also the wind is up and down the whole time, so you have to trim constantly to adjust for it.”

After one more race the discard comes into effect, so after Thursday's racing we will see how the cards have fallen and who will lead the fleet into the final two days. Racing continues Thursday at 11.30 with two more races scheduled. The 10-race series concludes on Saturday.