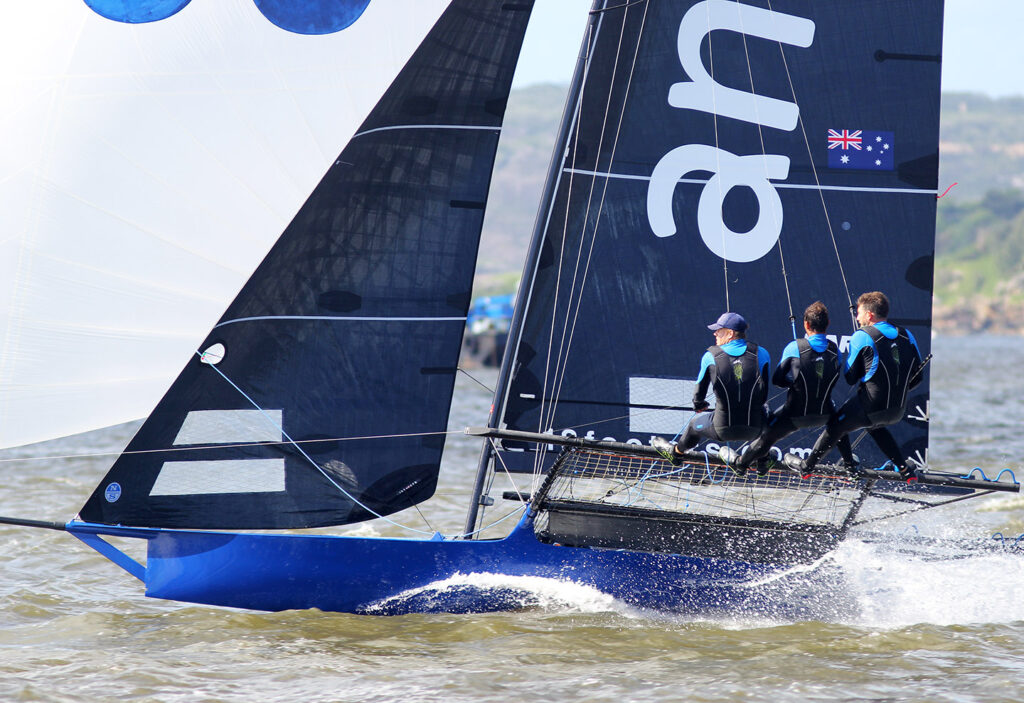 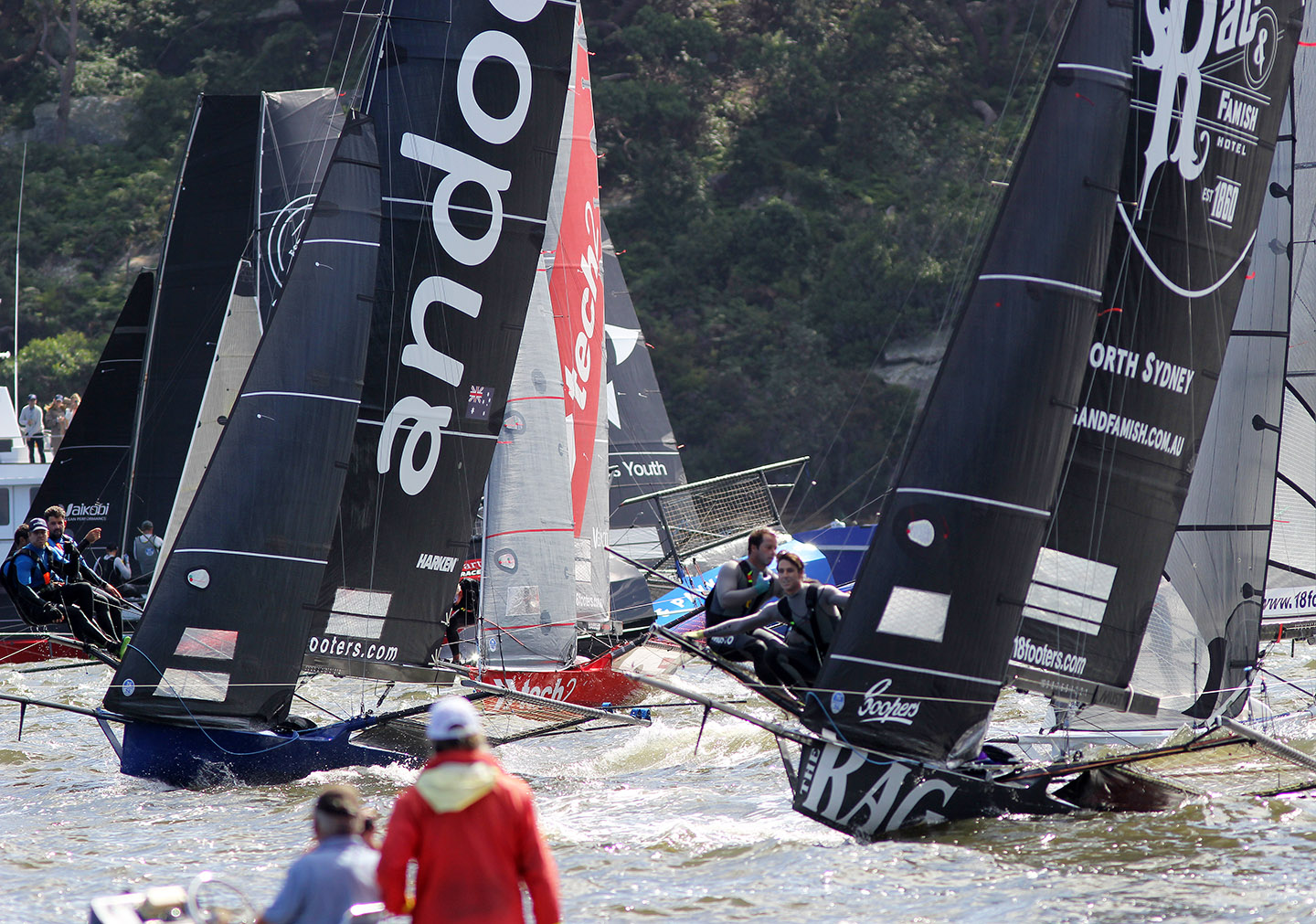 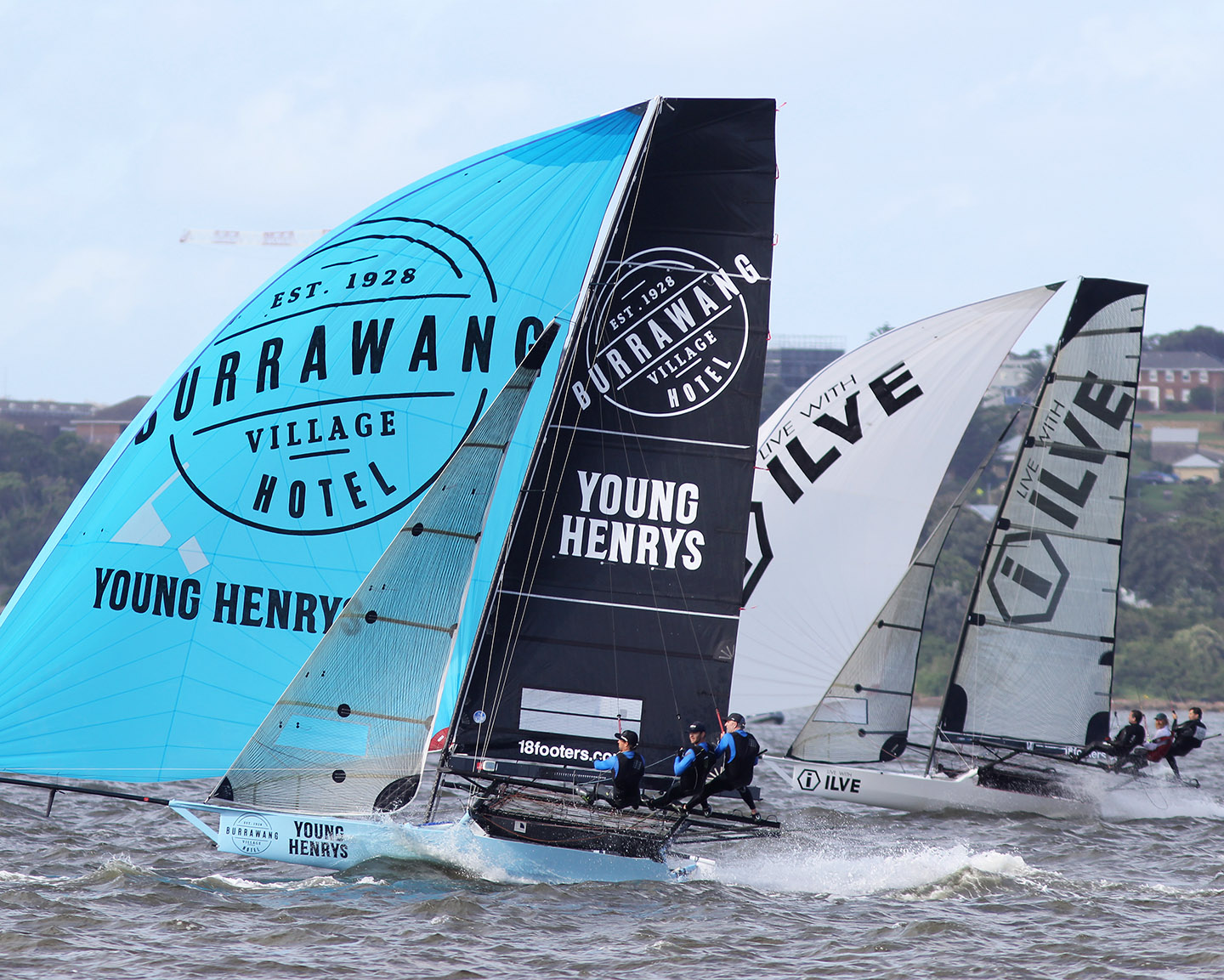 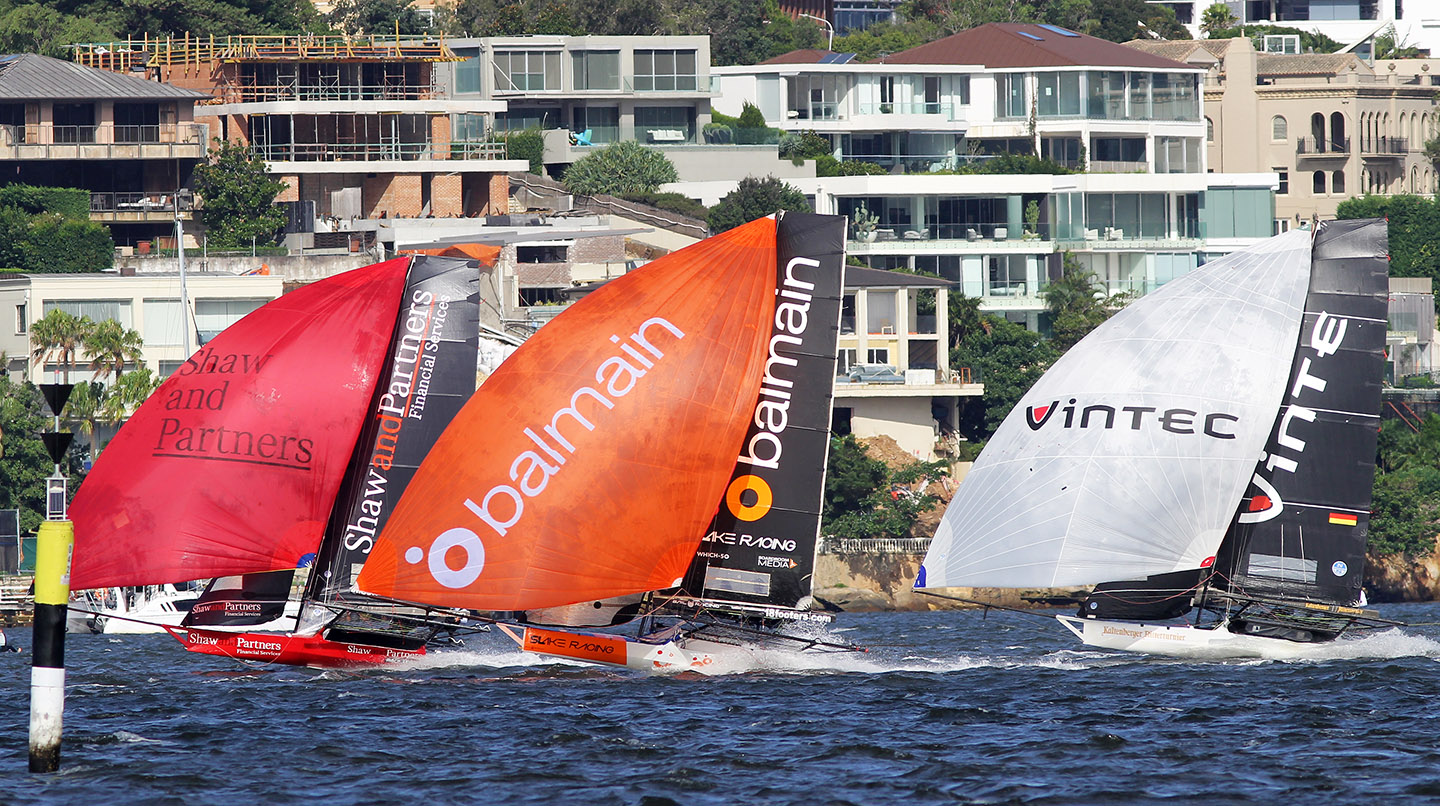 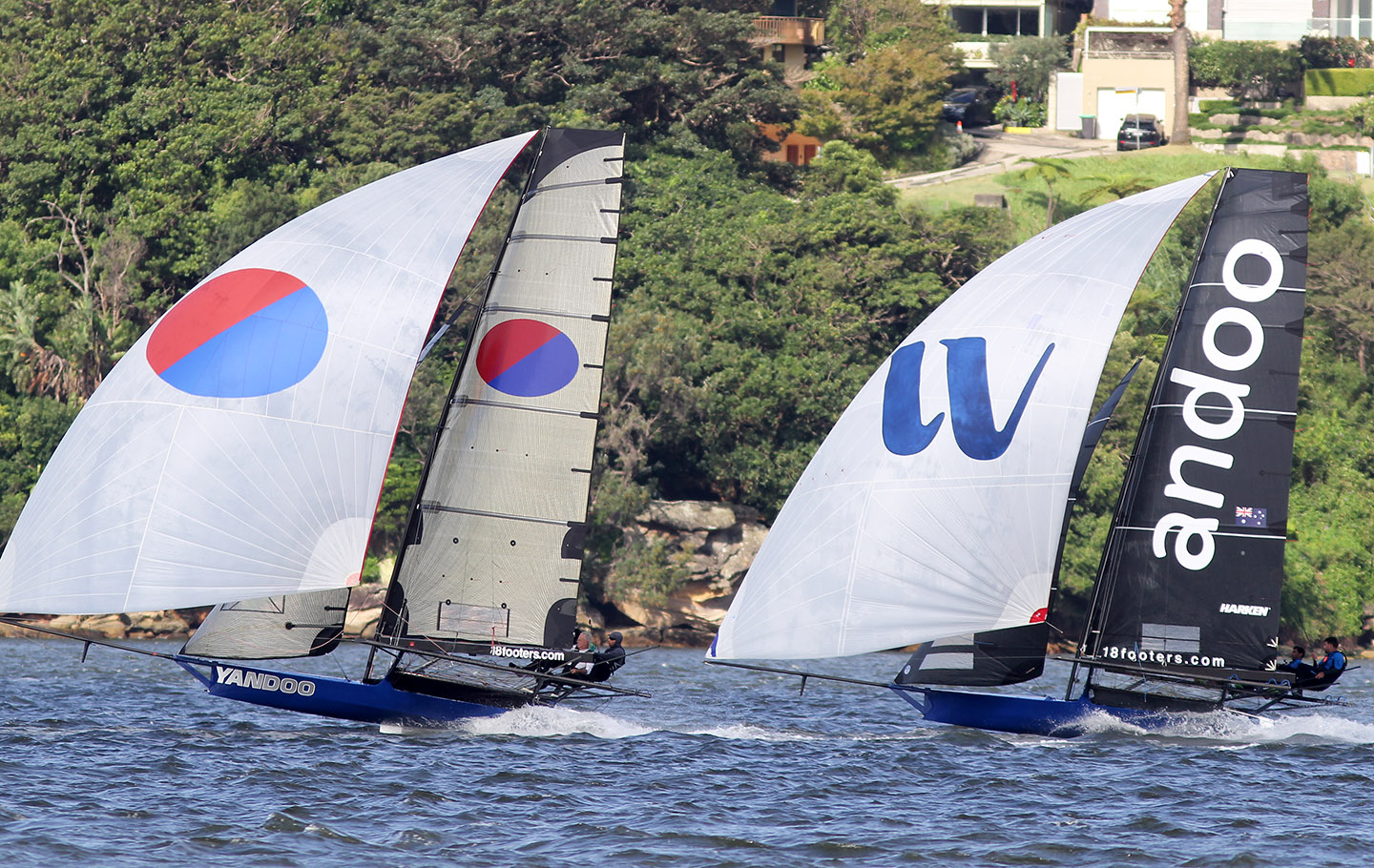 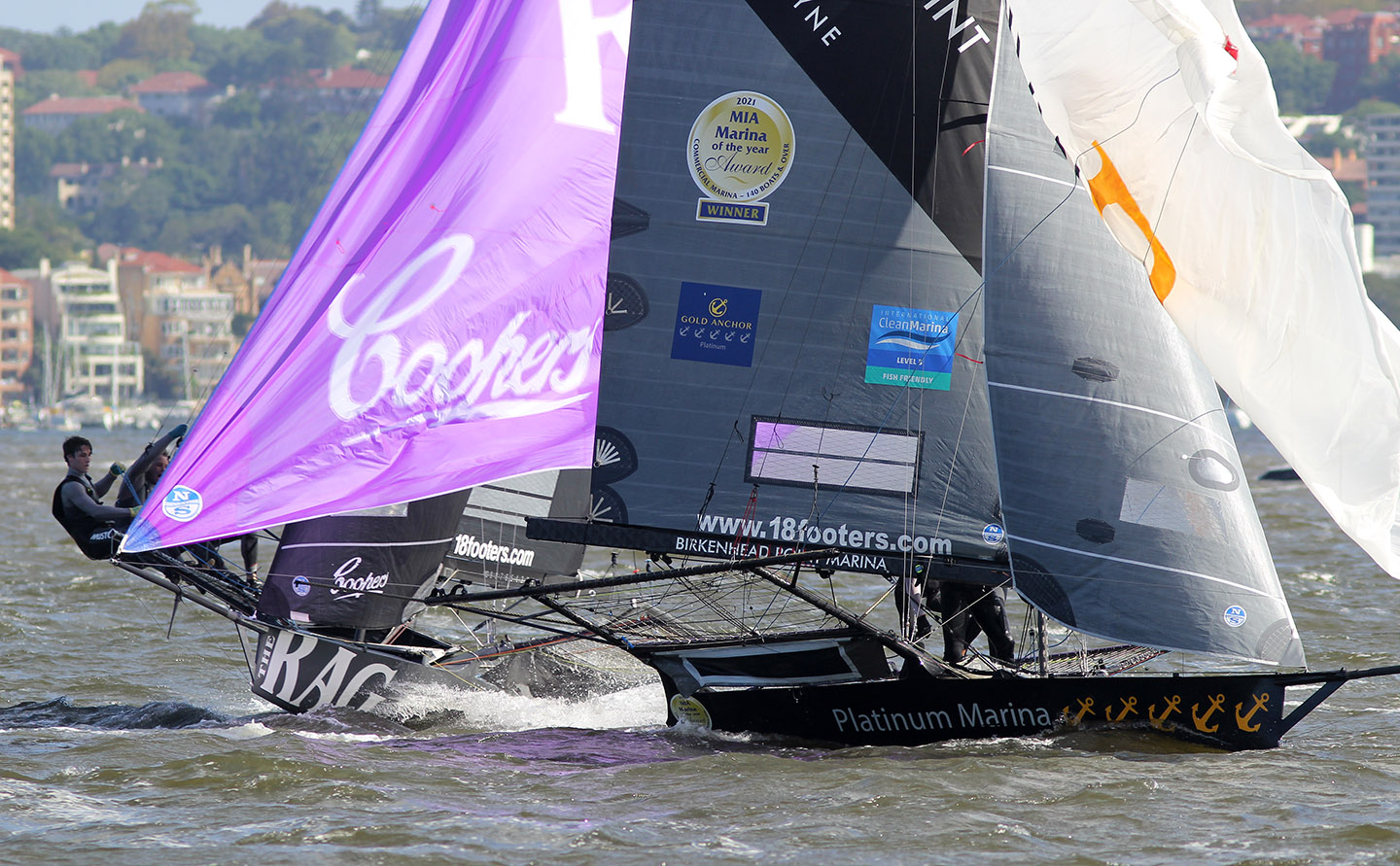 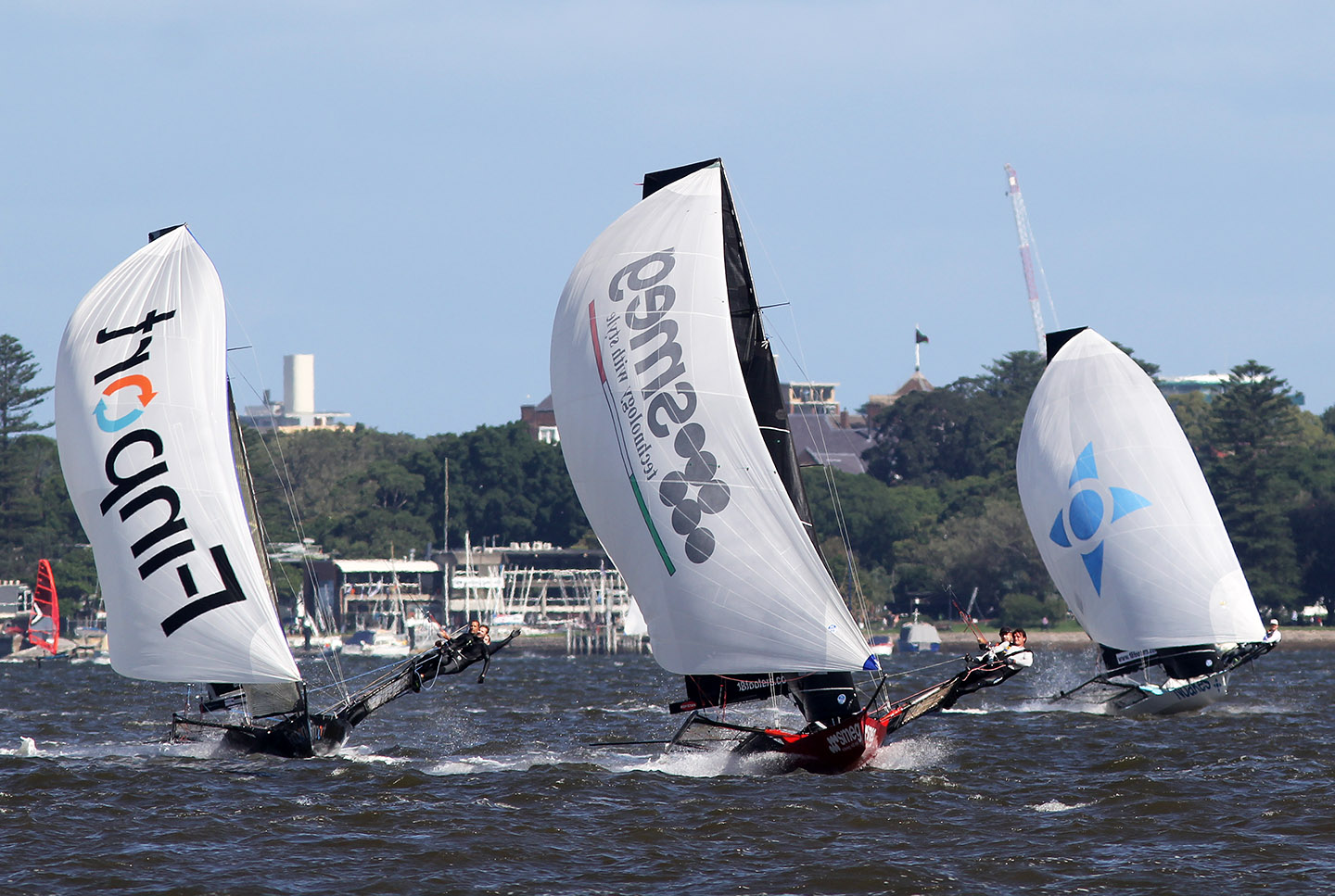 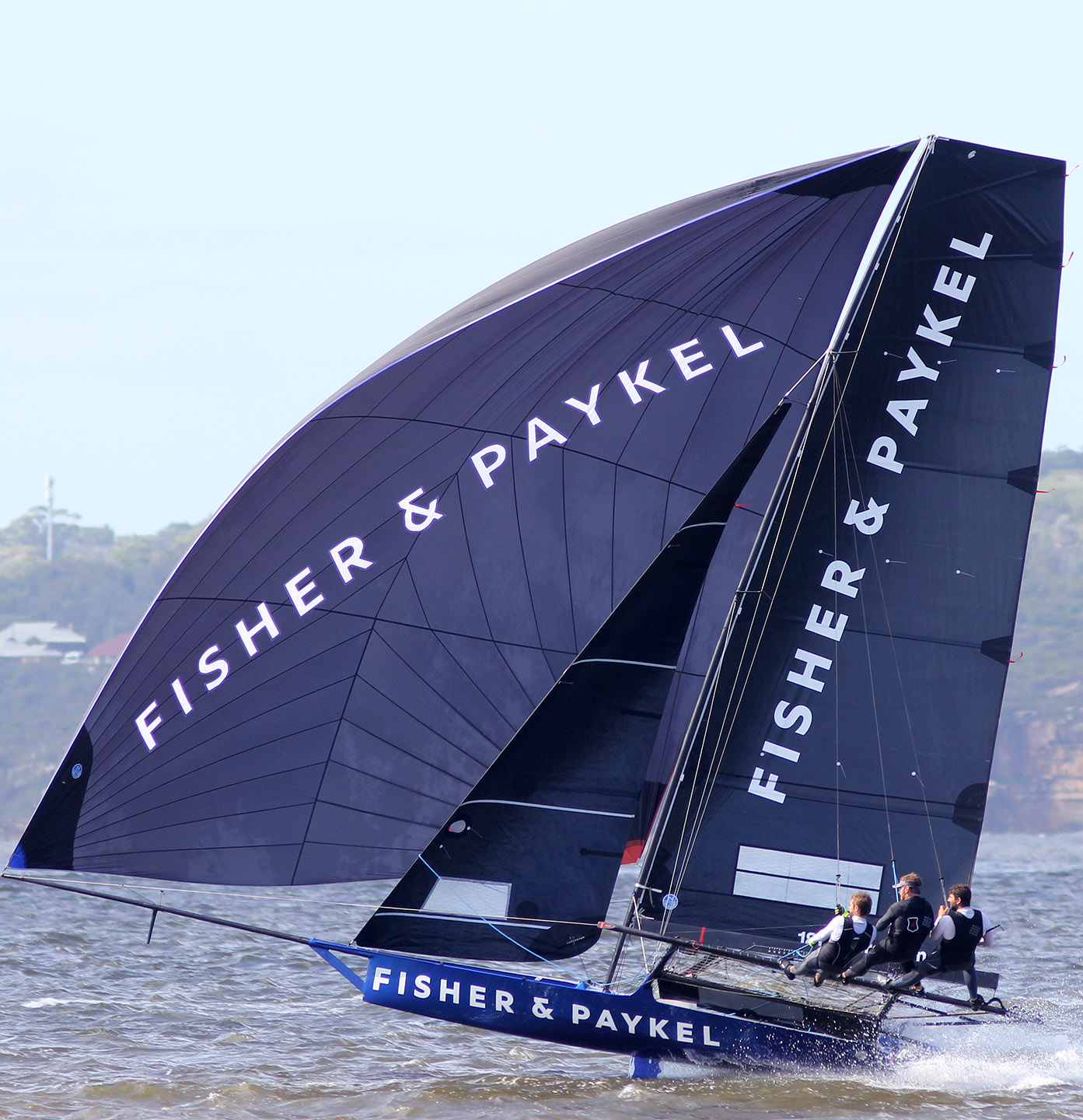 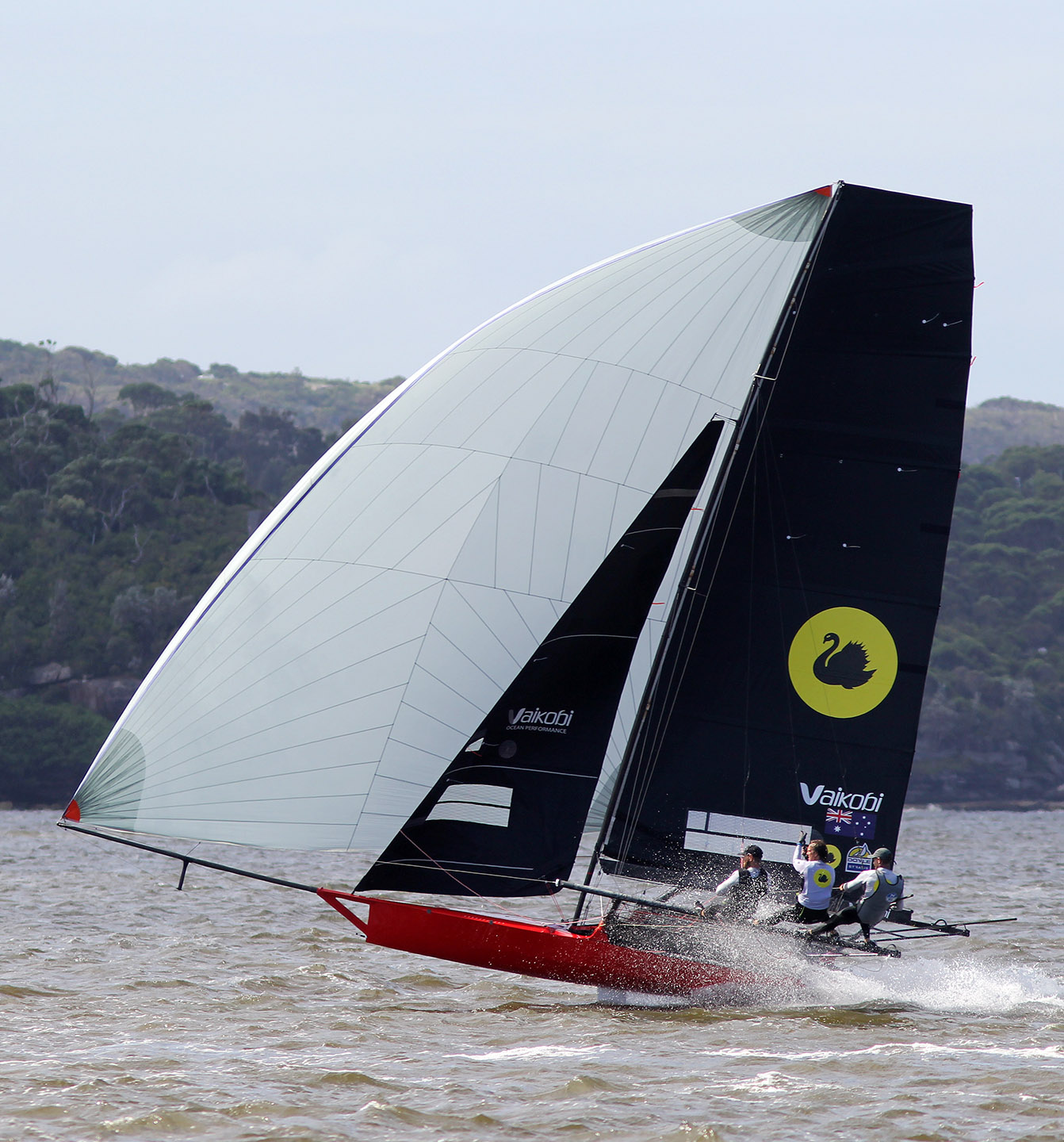 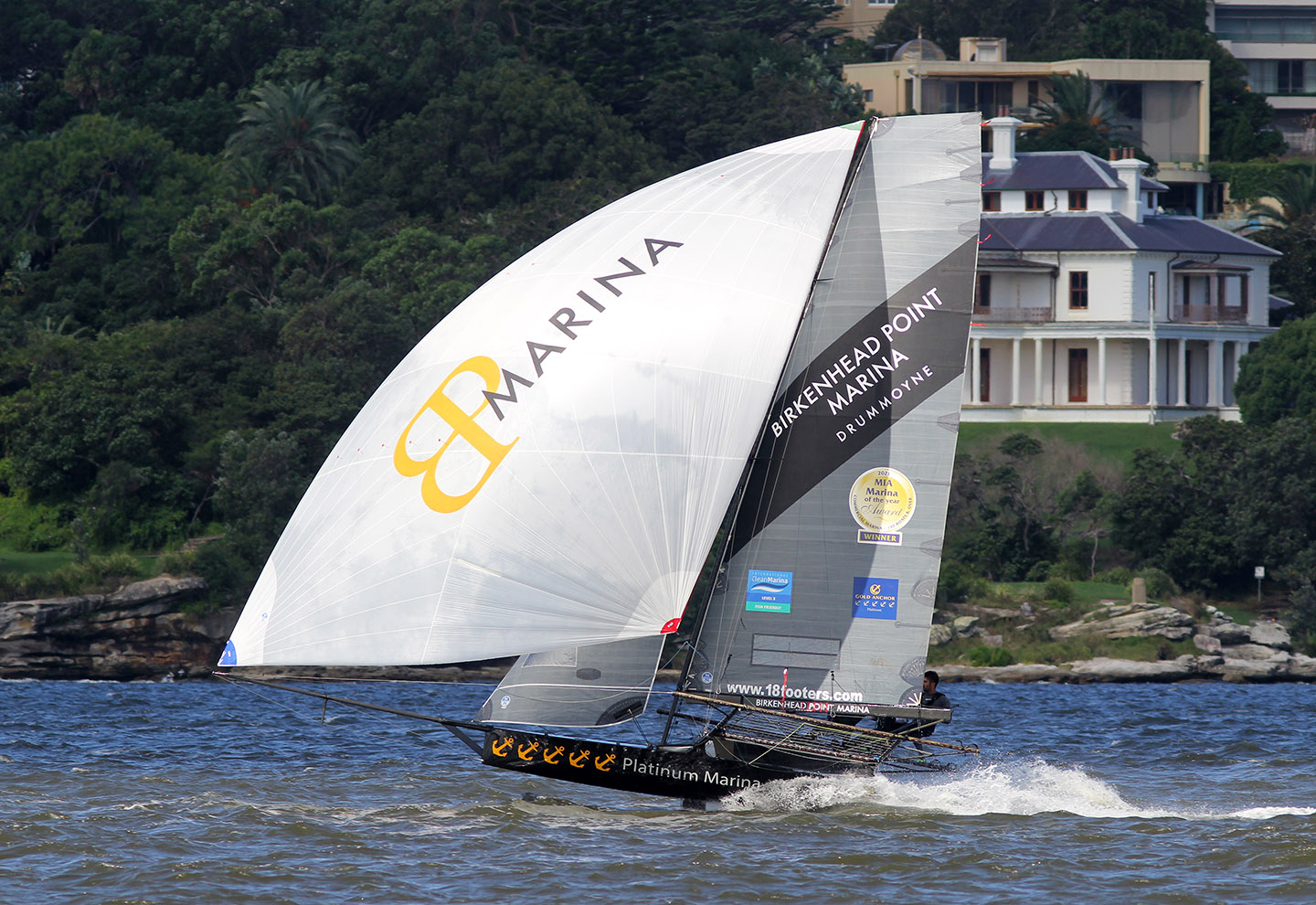 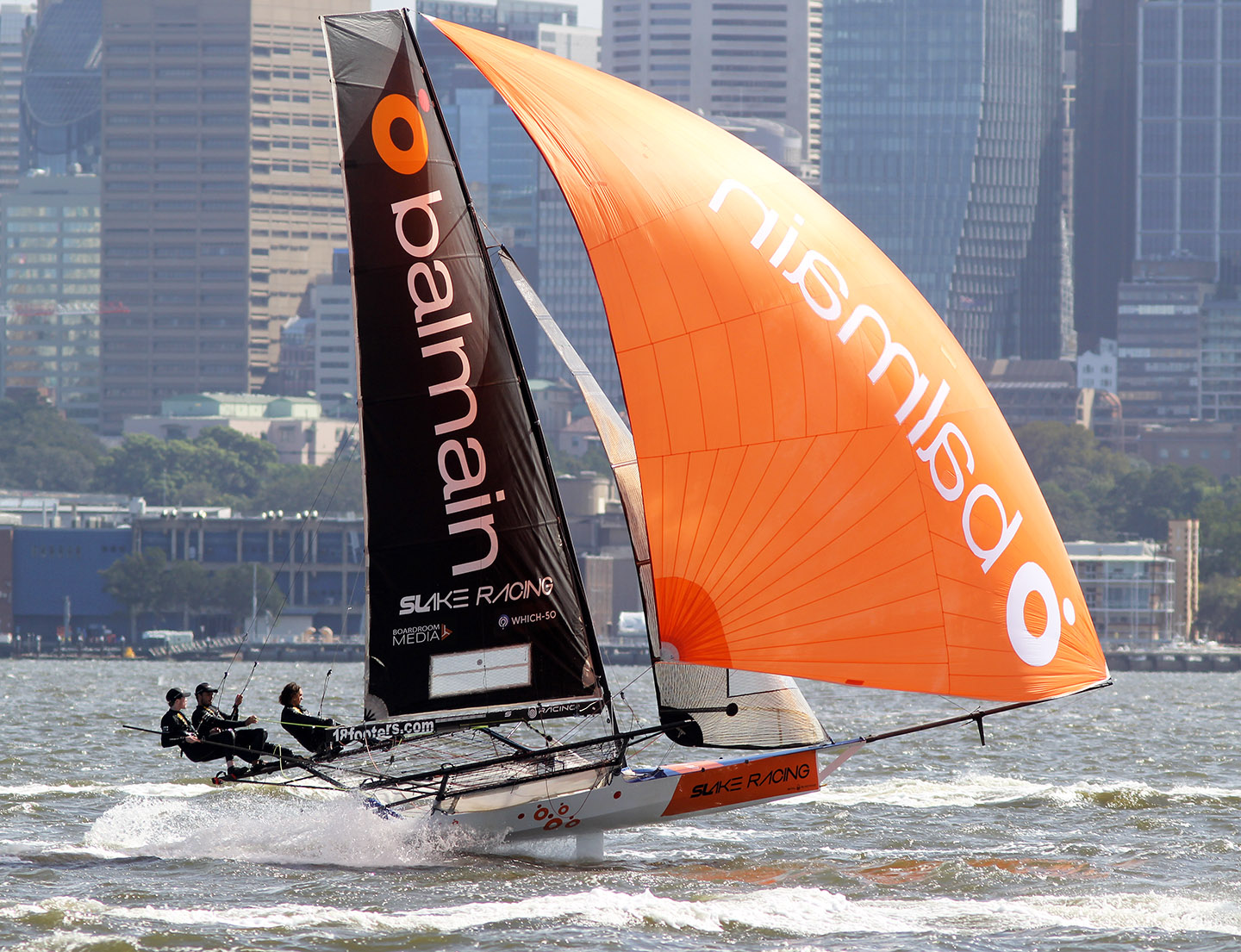 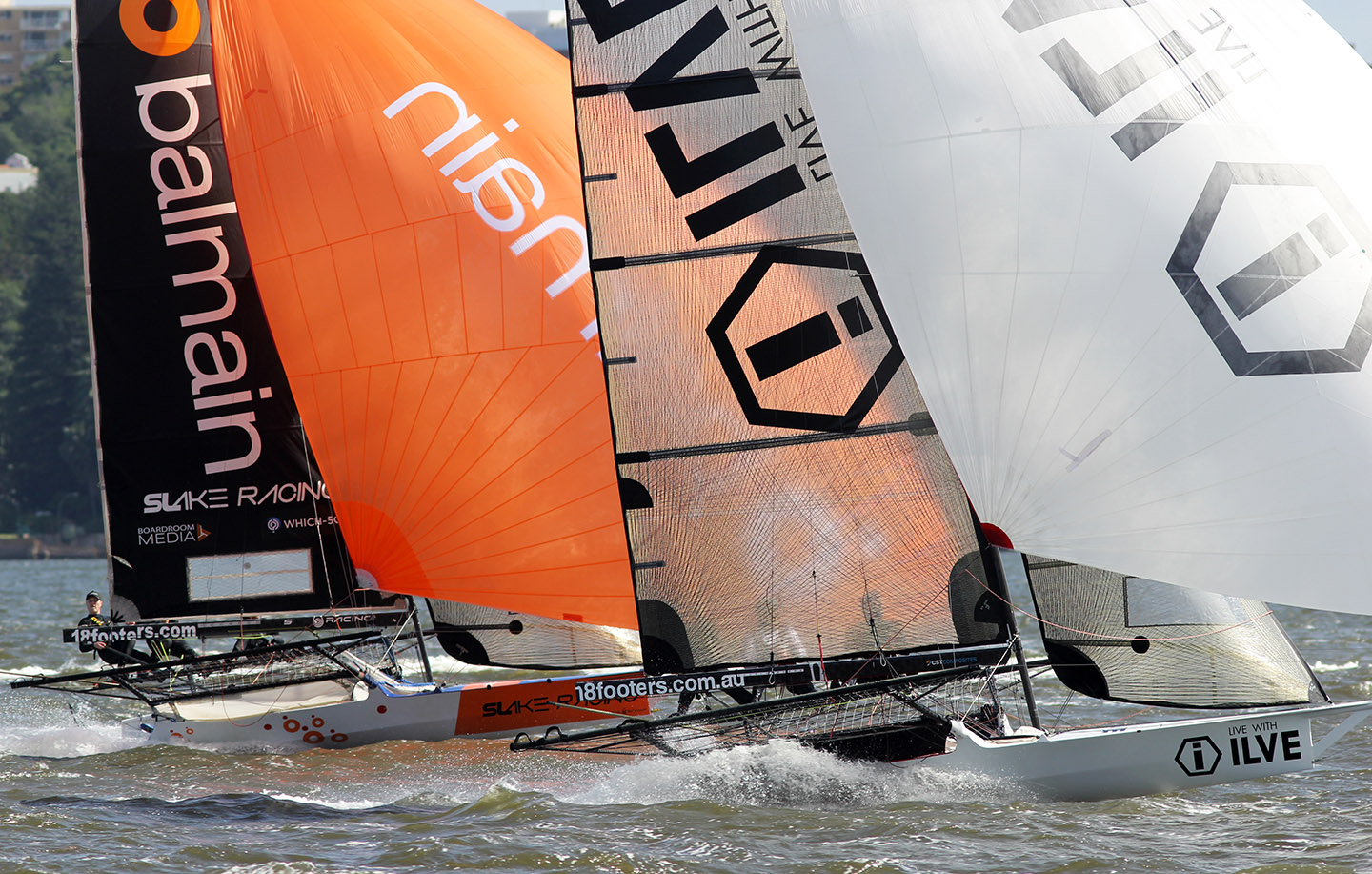 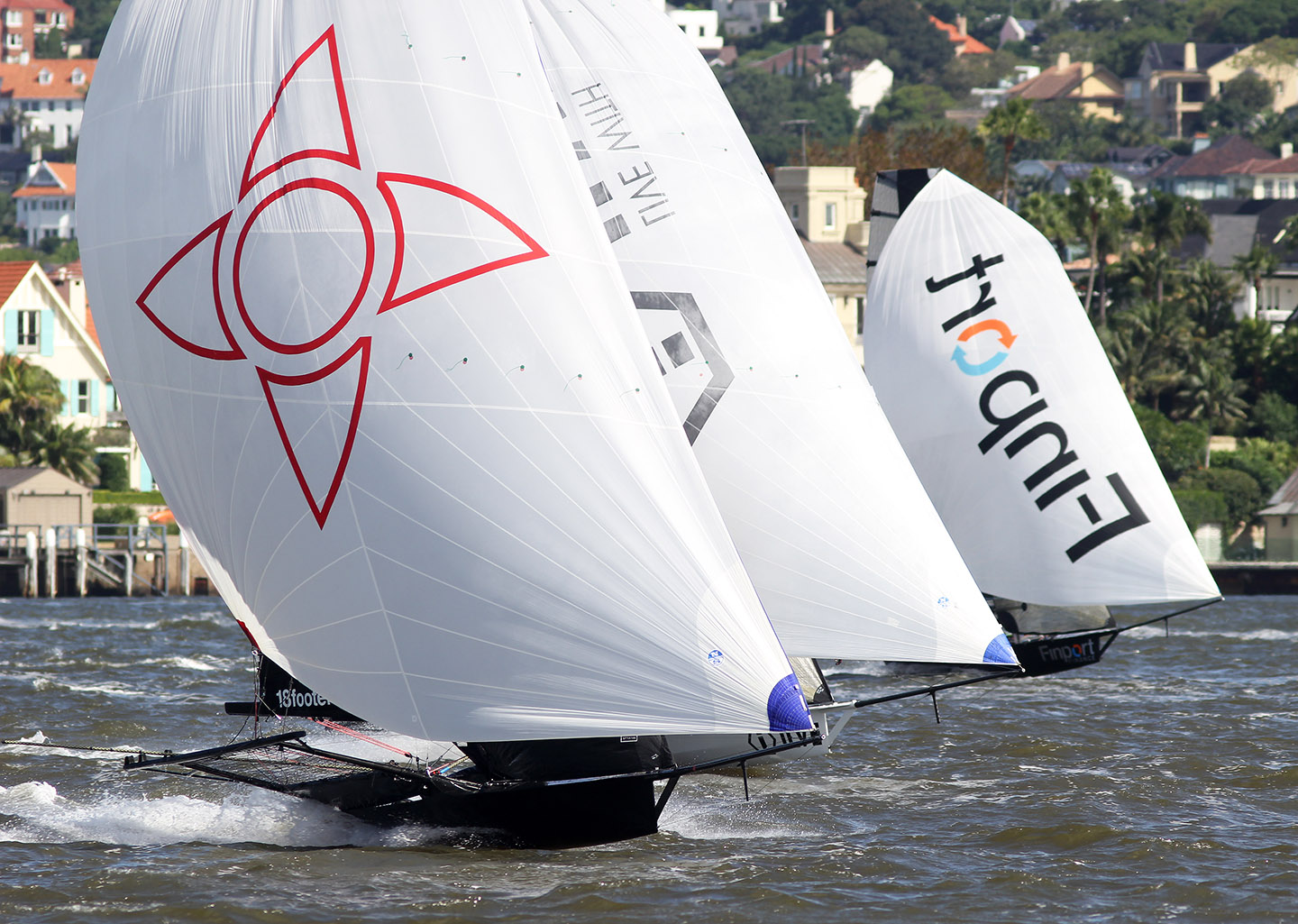 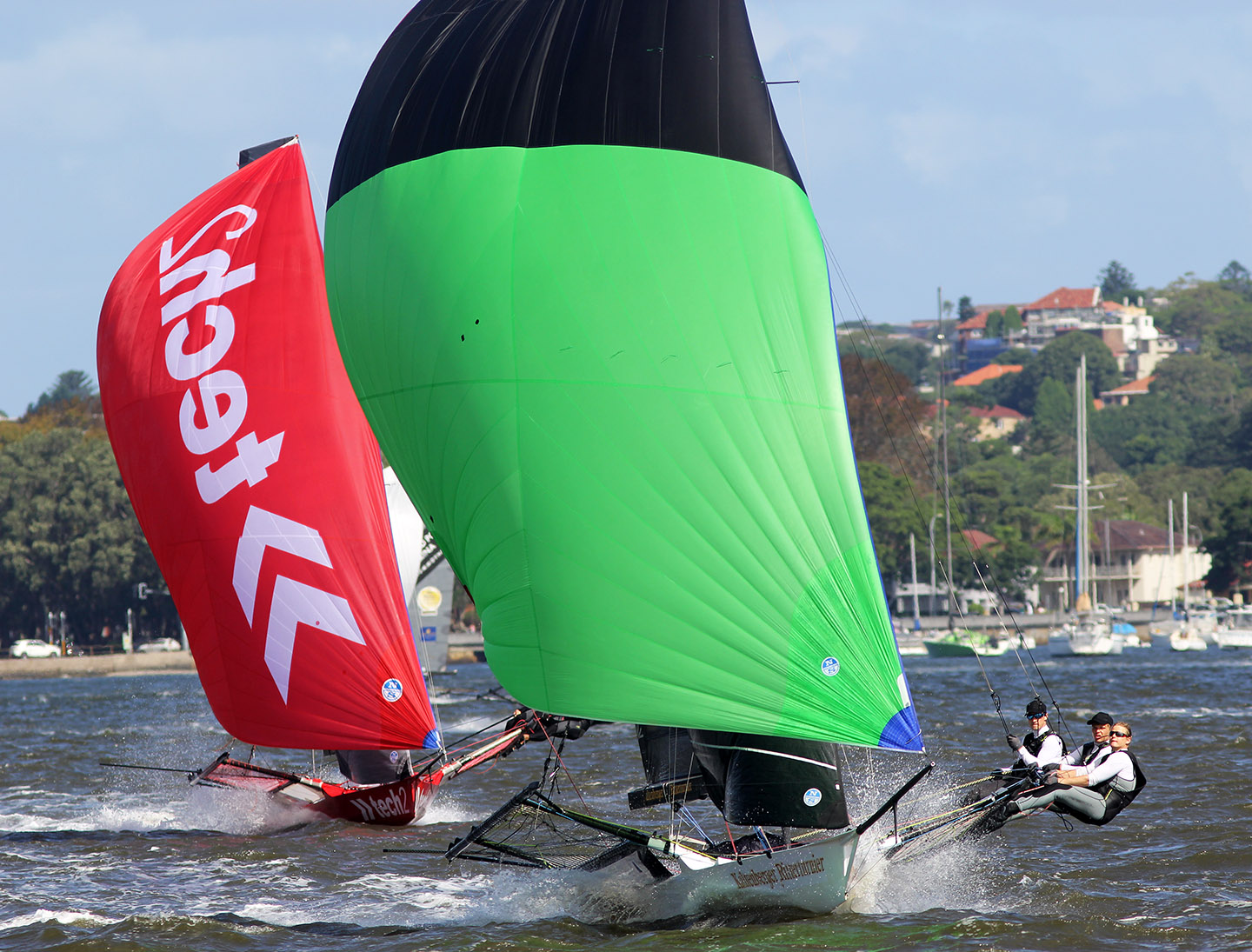 After several days of bad weather which forced the temporary abandonment of three races, the Australian 18 Footers League was able to conduct the scheduled Race 7 of the 2022 JJ Giltinan 18ft skiff Championship on Sydney Harbour today, as well as Race 6, which could not be sailed yesterday.

Once the racing finally got under way, the spectators on the ferry and the spectator fleet on the water were treated to some spectacular action and exciting finishes in both races.

Once again the Andoo team of Seve Jarvin, Matt Stenta and Sam Newton proved invincible as its record now extends to an unbeaten run of five straight victories from the five races sailed so far.

With just four more races still to be sailed before the regatta concludes on Sunday, Andoo has a commanding lead over the nearest rival, Tech2 (Jack Macartney, Charlie Wyatt and Lewis Brake) and looks to have a strangle-hold on the 2022 title.

The first of the two races produced a chaotic start with four skiffs capsizing on the start line and the action didn’t stop over the two laps of the course in the 15-21 knot SSE wind.

Andoo took the lead from the start (whenThe Oak Double Bay-4 Pines was rules out for an infringement) and was never headed over the entire course before going on to a 13s victory over an impressive Balmain Slake (Henry Larkings, Max Paul, Flynn Twomey) with Tech2 a further 8s back in third place.

In the second race of the day, Andoo had to come from behind before going on to a 46s victory over the Western Australian Black Swan team of Luke Paarkinson, Grant Rollerson and Luke Payne, with Yandoo (John Winning, Fang Warren and Mike Kennedy) a further 51s back in third place.

Andoo has a total of five points in the championship, followed by Tech2 on 13, Rag & Famish Hotel (Harry Price, Josh McKnight and Harry Hall) on 28, Yandoo on 40, Balmain Slake and defending champion Smeg (Michael Coxon) on 43.

In the early race, the battle behind the leader was exciting as the fleet raced downwind to the bottom mark in Taylor Bay.

Tech2 grabbed second place on the run from the German Black Knight team, led by Heinrich Von Bayern, then continued to hold on to second place until Balmain Slake produced a powerful finishing burst to take second place just metres from the finish line.

In the second race, the WA Black Swan team led over the first lap of the course before being run down just before the second windward mark but the team held on strongly to retain second place ahead of the experienced Yandoo team.

Two more races, (Races 3 and 4) which were unable to be sailed on Tuesday will now be sailed tomorrow with the final two races of the championship scheduled for Saturday and Sunday.

Scheduled races and re-sail of any abandoned races will be sailed over the next three days:

THERE WILL BE A SPECTATOR FERRY TOMORROW – BOOK ONLINE